"Waiting for Lefty": A Timeless Script of Class and Labor Issues

While "Waiting for Lefty" clearly speaks to a certain time and place, portraying such societal and governmental issues as class strife and Communism in the 1930s, its message and power can also be applied to matters that affect America today. Themes are shared between the play and American culture like xenophobia and racism; the play exhibited the repugnance and paranoia of citizens, especially government, of Communism and Judaism, and this is similar to the feelings of Americans today toward Muslims and Arabs. When Joe claims he "ain't a red boy one bit," fearful of the very accusation, it is as if one could replace "red boy" with "terrorist" and it would fit in American dialogue today. Also, finding Lefty "behind the car barns with a bullet in his head" depicts censorship, which many Americans feel exists in the country's media and elsewhere.

"Waiting for Lefty" also more directly relates to contemporary America as the nation still struggles with class and labour issues, albeit not necessarily to the same extent. Many would agree that big business in America is corrupt as it was in the play; for instance, Fayette's statement "If big business went sentimental over human life there wouldn't be big business of any sort!" shows extreme immorality like that of government-run Halliburton, which overcharged meals for U.S. troops in Iraq after 9/11. There are still clear divisions in class, as evidenced in both the play and American society by differences in language between members different classes; for instance, in hearing the voice of Tom Clayton saying, "I gotta right. I gotta right. Looka him, he don't say boo," then Dr. Barnes noting, "They're doing splendid work in brain surgery these days," one can determine the social separations between the men as one could today between professionals and common labourers.

Also, strength in numbers proves just as true today as it did in the 30's, with the largest organization of trade union members, the International Confederation of Free Trade Unions, comprised of 231 affiliated groups in 150 countries and territories, with a combined membership of 158 million.

In a broader sense, Waiting for Lefty can be understood and appreciated by readers today in the apparent authenticity of the characters as human beings. Sid and Florrie have dreams that are tested by bigger problems, in this case money. Miller is faced with the ethical issue of developing poison gas for modern warfare. Humanity is something that should be able to be found in any play because typical people can relate to it.

The play connects so well with life in America today that it is still used today to teach lessons and encourage equality. A clear example of the timelessness of the play lies in the strike by the Screen Actors Guild (SAG) and the American Federation of Television and Radio Artists (AFTRA) for updated, fairer contracts. SAG and AFTRA performed the "Waiting for Lefty" in 2000 to advance their effort, cleverly casting striking actors as the striking cab drivers.

Certainly "Waiting for Lefty" was written with the intention of highlighting the ills of big business and capitalism, the power of the "little man," and other issues prove relevant to American life today and rise above the setting of the 1930s. Still, a lot of the play is in those problems of the times, such as the Great Depression. Times today are not so difficult as they were in the 30's; social security and other social and economic programs exist, work is easier to find and wages are better following Franklin Roosevelt's New Deal. While there are undercurrents in American society similar to Communism, it is important to recognize the movement itself as a significant part of America at that time that affected the way people acted and thought, seen as a threat to government and capitalism. Clifford Odets was actually a member of the American Communist Party since 1934 and so wrote the play with a contemporaneous voice.

In spite of the historical qualities that give the play additional power, most of the strength in "Waiting for Lefty" is in the universality of its themes and basic issues between people. 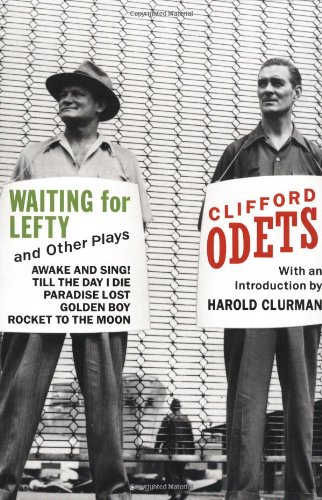 Waiting for Lefty and Other Plays
Buy Now