War of the Buttons The Book and the Movies

DVD of the by Christophe Barratier version

La nouvelle guerre des boutons - Edition collector 2 DVD
The version of the film by Christophe Barratier shot in the Auvergne. Please note that this film is in French and the DVD won't play on most US / Canadian DVD players. You need a region specific or multi-region DVD player and compatible TV. My husband uses the computer with the TV as a screen.
Buy Now

If you thought it would be quiet living in the depths of the French countryside, then think again! There's never a dull moment here in Limousin, and in spring 2011 they made a new version of La Guerre des Boutons, or War of the Buttons right here! Some of the film crew stayed in our cottage!

Directed by Yann Samuell the new Limousin version of War of the Buttons was filmed around Rochechouart and Biennac, just a few minutes from our Bed and Breakfast, Les Trois Chenes. The first I heard about it was when a representative contacted me about the possibility of using our holiday cottage, (or gite), to accommodate members of the film crew.

The film is about two rival gangs of boys who wage war, the victors cutting off the ties, belts and buttons of the vanquished. Who wins? The side with the most buttons of course.

As if that wasn't enough excitement, a rival version was directed by Christophe Barratier at the same time, though this time set in the adjacent region of the Auvergne, and both films were released just before Christmas 2011 at the same time.

Here in central and S W France it really is the war of The War of the Buttons!

I'd love to see just how a film is made, and so I went to the castings in Rochechouart along with all the other would-be film star hopefuls. See if my dreams of fame were realised in this account of the ordeal: Casting for La Guerre des Boutons 2011 at Rochechouart, Limousin

La Guerre des Boutons began as a book written by Louis Pergaud, and was first made into a film called La Guerre des Gosses by Jacques Daroy, sorti in 1937.

The second interpretation of the film was in 1962 and was directed by Yves Robert. The poster image is also renown. It was designed by Raymond Savignac, (1907 - 2002), often just abbreviated to "Savignac", a French graphic artist famous for his commercial posters.

In 1994 the film was again remade, this time it was translated into English, directed by John Roberts and set in rural Ireland.

The story has taken so many shapes. The War of the Buttons has also been retold in the form of an opera, children's books and a cartoon strip book.

Why the sudden resurgence of interest? Copyright has just come to an end, so it's a free-for-all.

The film is based on the novel by Louis Pergaud, La Guerre des Boutons, Roman de ma Douzième Année, (the War of the Buttons, Journal of my Twelfth Year), to give the book it’s full title, which was published in 1912. Pergaud, (1882-1915), whose works portray a fervent anti-militarism, was killed in action in the First World War.

La Guerre des Boutons describes the rivalry of two villages, Longeverne et Velrans, situated in the heart of rural France at the end of the 19th century. The title comes from the aim of the battle, which was to gain the majority of the buttons torn from the clothes of the enemy. The side with the most buttons was the winner. Most of the story was told from the point of view of the children of Longeverne. 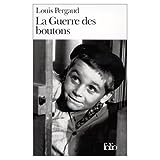 The first film version of the story was released in 1936 under the title of La Guerre des Gosses (War of the lads), by Jacques Daroy and Eugène Deslaw, with, amongst others, the future singers, Marcel Mouloudji and Charles Aznavour.

In 1962 a second version was released by director Yves Robert and won France's Prix Jean Vigo. Made at the height of France’s war against Algeria, something Yves Robert could not persuade the film distributors and financial backers to take up his project and was forced to set up his own production company with his wife, Danièle Delorme. He was forced to look towards American for support and eventually Warner Brothers rather reluctantly took up the film which turned out to be the second most popular film ever made in France at that time, and an international success. The film remains perennially popular here in France. Yves Robert is also known for his film Le Grand Blond avec une Chaussure Noire (1972)

A long and intensive search for suitable children was carried out and after viewing thousands of hopefuls, the young and largely untrained actors chosen included André Treton ("Lebrac"), Michel Isella ("l'Aztec") and Martin Lartigue ("Petit Gibus").

In the third re-make, the button war has been transported to Ireland, ‘the emerald isle’. This time the film, directed by John Roberts and starring David Puttnam, has been translated into English and is set in County Cork and filmed on location. The landscape is stunning beautiful.

The two rival child gangs are now the impoverished Ballys versus the wealthy Carricks. The bridge over the river which separates the Irish villages of Carrickdowse and Ballydowse has a white line drawn at the centre over which the children step at their peril.

War Of The Buttons
See the film here. DVD of the Irish version of the War of the Buttons. Colin Welland says, "is that it's not an adult's view of childhood at all, but a child's view of adulthood."
Buy Now

These are the two new versions of the film made in our region of France. One filmed around Rochechouart, Limousin, (near to Les Trois Chenes), and the other is set in the neighbouring area, the Auvergne. Both were released just before Christmas 2011.

Is this going to be the real battle of La Guerre des Boutons?

The War of the Buttons by Yann Samuell, set in the Haute-Vienne, Limousin

In this new re-make of the film, One World Films and director Yann Samuell intend to create a faithful adaptation of the original book. Samuell's only change is the inclusion of a female character in the Longevernes clan, the mother of Lebrac, one of the boys. This role will be undertaken by Mathilde Seigner. Filming will take place in the Haute-Vienne, Limousin around the quaint medieval town of Rochechouart which is dominated by its magnificent chateau, and the ancient village of Biennac with its beautiful church and authentic Limousine houses.

The buildings in this region are constructed from ‘moonstone’, the stone from a giant meteorite that fell just to the west of Rochechouart. The whole area is one of rolling pastures, wild flower meadows, lakes and chestnut and oak woodlands. It is a region that is green, rich in wild life, sparsely populated and totally unspoilt. According to several sources, the rights to the new film have been acquired by the French TV station TF1.

In October 2011, both films were out and I went to see 'our' one (Yann Samuell) in the cinema in Saint Junien. It was superb, even in French! Updated in many ways - women actually feature in this one! A must see for anyone interested.

The Auvergne version is also out, but I'm waiting for that to come out in DVD - preferably in English and if possible from our local library in Rochechouart. I'll update accordingly.

Christophe Barratier directed one of my son’s favourite film, Les choristes, The Chorus, (2004), a film about adolescent boys which took place in a boarding school, so he would be an obvious choice when it came to bringing the War of the Buttons up to date. Les Choristes was filmed in the area around the Château de Ravel (PuydeDôme) in the Auvergne, an area of breathtaking beauty and with a character harsher but no less spectacular than the Haute-Vienne landscape. Christophe Barratier returned to the Auvergne once again in 2005, this time to Aubiat, dans le Puy-de-Dôme, to write the scenario for his film F a u b o u r g 3 6, (Paris 36). It’s of no surprise, then, that this region will play host to La Guerre des Boutons.

Thomas Langmann will be producing the film in partnership with Warner Brothers.

Not in the least! I'll keep you posted. I hope to keep an eye open for the developments in this war and I'm definitely looking forward to seeing the two films. In the meantime, if at all possible, I think a trip to the Auvergne is in order as it isn't too far away and the landscape and castles look as wonderful as our corner of Limousin.

At last - the War of the Buttons is out!

Yann Samuell's version of the War of the Buttons was released on the 14th of September and was so popular in Saint Junien that we couldn't get in! So a second attempt was made on the following Sunday, and I must say, it was worth waiting for.

Fabulous photography, wonderful landscape, excellent casting and a whole new approach. Do go and see it.

Where in the world is Rochechouart? 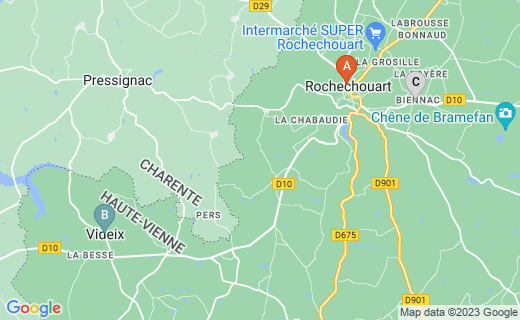 Our Bed and Breakfast and self-catering holiday cottage (or gite), is just ten minutes away from Rochechouart. We also offer painting holidays.

Keep up to date with the progress