Where Was the First Drive-In Theater? - Drive-In Vacations, Law Suits and Film Clips

We even had a few in the more central neighborhoods of Columbus as late as the early 1980s. Many people miss them!

Today, we have one commercial two-screen drive-in theater on the south side of town and one nonprofit venture on the Near West Side, connected with a church. The second one is in a residential neighborhood and in the spring and summer, people bring their lawn chairs and snacks across the street to enjoy a family movie or religious film.

One cinema that might qualify as a walk-in theater is the screen set up outside the Wexner Arts Center at 15th and High Streets on The Ohio State University main campus each summer. Students and area residents enjoy this one with weekly films and concessions every year.

The year 2012 was the 79th anniversary of the Drive-In Theater, an American invention. However, conflicting information places the first drive-in or park-in cinema in Camden, New Jersey and Orefield Pennsylvania. Let's have a look!

For the history of the drive-in theater in Ohio, I went to the OSU arts complex where I enjoy attending the regular independent film festivals held at the Wexner Center; and to the University of Michigan, where I also enjoy visiting.

I found that the Camden, New Jersey theater was the driveway and back yard of the inventor, Richard Hollingshead, Jr., who owned and operated a chemical company. He experimented with a Kodak projector and a screen nailed to his backyard trees and was awarded a patent for the drive-in theater in May, 1933. His is the earliest such patent.

The case involved his patent. He was the plaintiff and retained his patent and related rights. This was only one of several law suits, indicating that the invention of the drive-in theater was going to be very big business.

And so it was until the late 1970s, providing over 40 years of entertainment in innovative venues. America and other nations still have operational drive-in cinemas today that are well attended.

Opening night was June 6, 1934, packed with just under 400 vehicles full of people ready to try the new venue. They watched a second run film (one that would play at our discount or "dollar" theaters today) - Wives Beware (1932) with Adolph Menjou.

The theater operated only until 1936 and moved to Union NJ with the man that purchased the theater from Hollingswood. 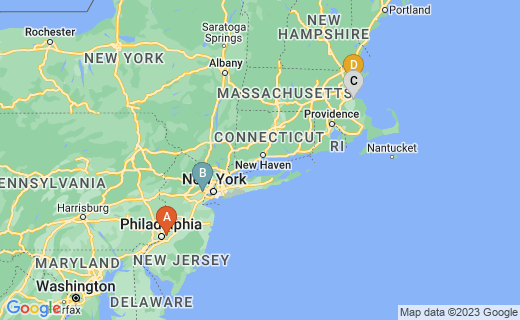 Weymouth Drive-In was Number Three, but legal action was necessary to enforce a licensing agreement with Hollingshead.

Interestingly, Shanweiler's website in Pennsylvania, representing the oldest continuous running drive-in, states that over 4,000 such theaters once ran simultaneously in the USA. Pennsylvania still has dozens of them.

Rise and Fall of the Drive-In Theater

An enjoyable vacation is one that takes travelers across routes within a state that feature drive-in theaters. Besides attending movies, visitors can find photo opportunities and visit other attractions connected with some of these theaters. Below are a few of the states that have operating drive-in movies and the cities and towns to visit.

If you happen to see that any of the following Drive-In theaters have closed, or if new ones have opened in these states, please post your information to the Comments thread below. Thanks!

True Story - In the 1980s, the West Fifth Avenue Drive-In Theater sat in the 900 block of West 5th Avenue in Columbus (Grandview inner suburb). It specialized in quintuple features (5 films) and you'd win a prize of you stayed until morning. The films any night would revolve around a theme - bad horror flicks, nurses, that type of thing. Lots of related premiums and gags accompanied the films.

West 5th Ave had closed and the land sold to a restaurant chain for whom I worked, so I had the fun and privilege of helping to open a new unit. However, the drive-in's washroom holding tanks or sewers underground had never been cleaned out, so a pervading rotten smell proliferated in the parking lot for the life of this restaurant. It was remodeled and rebuilt and the grounds cleaned thoroughly - then reopened as a franchise, without a hint of the odor.

A large modern car wash and upscale apartments stand next door of it to the east. Just to the west is Fortin Ironworks, a long-time successful business and Salon Lofts, which used to be a Mercedes auto dealership after is had been a Rambler dealership for several years. Beyond that is shopping and local attractions in Grandview.

If you're ever in the neighborhood, stop in and ask about the drive-in theater that once stood on the property. The management and crew may know nothing about it! 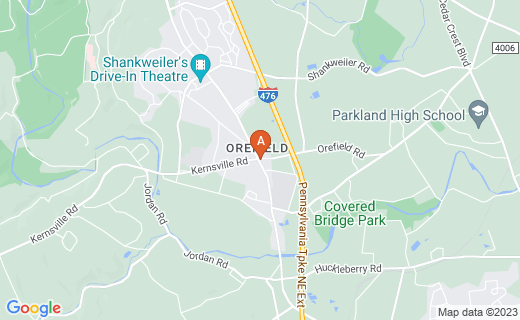 Near Allentown and Bethlehem: Orefield, Pennsylvania - Shankweiler's Drive-In Theater, Since 1934

Along the way, you will find many closed drive-in theaters that include good photographic subjects of buildings, screens and more.