Born in 1994, I became a Duran Duran fan in the early 2OOO's, mostly due to my dad, who was often listening to their 8O's classics in his car. Songs like The Reflex, A View to A Kill and especially Notorious got me hooked instantly. As I grew into an hardcore Duranie, I explored their impressive music catalog and discovered some real pop gems along the way. Even overlooked albums such as Liberty (199O) and Medazzaland (1997) contained marvelous songs. Sadly, I feel that the band remains underrated to this day as it is too often categorized as an 8O's band only. I believe they released some of their most interesting material in the 9O's (The Wedding Album is incredible). While the quality of their songwriting and hooks remained overall consistent through their career, success was not, The Wedding Album being the only album of the 9O's to get significant success.

With Thank You (1995) being destroyed by critics, Medazzaland (1997) being not even released in Europe and Pop Trash (2OOO) becoming the biggest flop of their career, the early 2OOO's and their next album became a make-or-break moment. Luckily, Astronaut (2OO4), which saw the return of the original members lineup together for the first time since 1983, found great success, the album itself reaching No. 3 in the UK and No. 17 in the US while first single (Reach Up or the) Sunrise reached No. 3 in the UK. Duran Duran was back ! The band started working in 2OO5 on their following album titled Reportage with producer Michael Patterson but the record would ultimately be scrapped following Andy Taylor's departure. Some claim that the Reportage album was fully recorded but it remains unreleased to this day. At the same time, N-Sync lead singer made it big with the release of his FutureSex/LoveSounds solo album in 2OO6. This genial record was produced by visionary producer Timbaland (and to some extent Nate Danja Hills), whose sound became the hot thing of the moment. Like many other artists impressed by Timberlake's opus, Duran Duran considered starting over and working with Timbaland. No, wait, the band later said it was their label's idea (Sony), who rejected their Reportage album. According to guitarist John Taylor :

"That whole project was a fucking nightmare. We delivered an album to Sony that was a natural-sounding, almost rock album and they were like, 'We need something a bit pop, do you fancy doing a couple of track with Timbaland?'"

So is Red Carpet Massacre any good?

The Timbaland sound is unmistakable ; we get scattered drums, obscure sound effects, vocal percussion and sonic Eastern mosaics. Does it blend well with Duran Duran's own sound ? Yes and no. Red Carpet Massacre is a very uneven album. The album kicks off very strongly with its first 4 tracks, The Valley being a perfect opener. It's a mid-tempo song that is probably the one that sounds the most like the Duran Duran of the 8O's on this record as Timbaland's presence is very low-key. Simon Le Bon's vocals are very strong here and the song was a joy to listen to live. Next comes my favorite off the album, the title track. This is also one of my favorites from the band's whole catalog. I think the chorus is infectious and Timbaland's production blends effortlessly with the band's work. I always feel a rush of energy when listening to it ! The track segues into Nite-Runner, what I consider the Justin Timberlake track. Not only because he provides back vocals, but also because it sounds like an outtake from his own FutureSex/LoveSounds album. It remains kind of groovy but is quite repetitive and just not very original. Apart from Le Bon's vocals, there isn't much Duran Duran in it.

Falling Down follows and was released as the first single. It would end up being the only one, as it reached only No. 52 on the US Hot 100 and the album disappeared quickly from the charts. The chorus is beautiful but I can't help but find the track somewhat depressing and I rarely listen to it. There was an accompanying music video that is also far from one of my favorites. It depicts the band singing the song in what seems to be a rehab center or mental hospital. You can watch the video yourself below :

While Falling Down is undeniably a beautiful and catchy slow song, I don't believe it was the best choice for a first single. It's kind of depressing and won't play in any club (despite the number of remixes available on the CD single release). To me, tracks like The Valley, Skin Divers or Tempted would have been much better as they are my favorites off the album. Falling Down was probably chosen due to Justin Timberlake's involvement on the track (he co-wrote this one and Nite-Runner). Box Full O'Honey is a rather forgettable slow track that remains pleasant to listen to. More impressive are Skin Divers (on which Timbaland shares vocals with Le Bon to great effect) and Tempted, both tracks displaying the genius of Timbaland. Those tracks could have been club hits and I can't resist dancing when listening to them. Still, they don't sound like your usual Duran Duran (more like Timbaland feat. Simon Le Bon) so that might explain why fans seem to overlook them. Tricked Out is an absolutely horrible instrumental and I don't understand why it was included. There are many weird sound effects in it that makes it quite unpleasant to listen to. Zoom In and She's Too Much are both great tracks and sound like a real band effort, not like Timbaland is taking over. They are very catchy numbers with great choruses. Sadly, the last two tracks, Dirty Great Monster and Last Man Standing, are very bland and i barely listen to them. It's a shame the album ends on such a bad note. However, I find myself often listening to 8 of the albums's 12 tracks, so I must say I love this album...

The album was promoted with a world tour, the setlist containing both classics and new songs from the album. I believe the Red Carpet Massacre material sounds amazing live, as evidenced in the below video. It's a shame the band doesn't play songs from this record anymore in their tours... 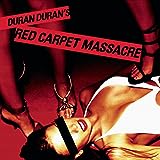 The lack of success of Red Carpet Massacre meant the band had to reinvent themselves again, but this time they went back to their 8O's sound and the original lineup reunited once again. It proved to be a good decision and as a result, their following albums All You Need Is Now (2O1O) and Paper Gods (2O15) were much more successful. Duran Duran were not the only artists who released a Timbaland produced album during the late 2OOO's, with Madonna's Hard Candy (2008) and Chris Cornell's Scream (2009) also getting the producer's signature sound (among others). The album was also released in a deluxe format that included a DVD with the making-of documentary that you can watch below. Japanese and Italian also included bonus tracks such as live versions of Nite-Runner and the title track, along with a studio outtake titled Cry Baby Cry. This last track should have been included on the regular version. It's much better than tracks like Last Man Standing or the Tricked Out (Instrumental). It is worth checking out if you enjoy the era. Red Carpet Massacre remains overlooked in Duran Duran's catalog and remains one of my favorites. Keyboardist Nick Rhodes declared something in 2O11 that in my mind says it all about this album :

"When Timbaland saw the guitar and the bass and the drums come in to the studio, I think he was mortified because everything’s in a box for those guys," he said. "But I'm really glad we made that album, because in time I think it will stand up."

In most ways, I think it does. Don't skip it!

Thank you for reading !

What do you think of duran Duran's Red Carpet Massacre ?