In today’s world of automated industry, mass production, and global shipping, it’s increasingly easy to find inexpensive guitars no matter where you are in the world. Whether you're just looking to get started with the instrument, in search of a new gig guitar, or just want something inexpensive to have as a “beater” that you’re not afraid to treat a little rougher than you might treat an expensive guitar.

Of course, going “cheap” can be a minefield, especially with a product as complicated as an electric guitar, and you run the risk of buying something that is so poorly put together, or uses such poor quality parts, that it’s not worth the money saved by not buying a better model.

Not so with the Yamaha Pacifica 112J.

Now, admittedly, at a time when you can find brand new guitars for less than $80, and second hand ones for as little as $20, a $200 guitar like the Pacifica might not be considered a “budget” offering. It is certainly aimed at the entry level market, but whether you consider it cheap may simply come down a matter of personal opinion. It’s unquestionably an low cost guitar when compared to most Gibson or Fender offerings. And, in truth, the price difference between the Pacifica and those $80 guitars really shows in the quality of the instrument.

Because looking cool is half of being a musician, right?

The Yamaha Pacifica design is based on—or at least heavily inspired by—the Fender Stratocaster model of guitar and can come in a number of finishes. My Pacifica sports the “natural” finish with white hardware, a combination I feel is both subtle and classy; easy on the eyes without over doing it. The body itself is made from laminated alder giving the pattern of the guitar body an interesting look. You can also get other finishes, from sun bursts to a range of solid colours. The bolt on maple neck and rosewood fingerboard contrast nicely with each other, and though I can’t find any actual mention of what material is used for the inlays, they appear to be mother of pearl or some analogue. The fretboard itself is not bound, a decision I’m sure was made to keep costs down. However I’ve always been partial to the look of an unbound fretboard. Again, this will likely come down to your own personal preferences.

The controls come in the form of two white plastic knobs (tone and volume) and one toggle switch for altering the pickup configuration. I’m not a fan of this particular design of control knobs but that’s a personal preference, and it is the standard for Stratocaster-style guitars, not to mention the dials on a guitar are probably the easiest thing to change if you’re so inclined. The guitar’s headstock is, again, heavily inspired by the Fender Squire, and features the Yamaha Pacifica logo along with their distinctive star emblem.

Visually the Pacifica is almost identical to a regular Strat to all but the most keen eyed observer. The most obvious difference is that, while the standard Strat design employs three single coil pickups, the Pacifica uses two single coils and a humbucker at the bridge. Another obvious difference is the output jack, which is on the edge of the body rather than the front.

How comfortable is it to use? Let's find out.

The Pacifica is a solid body guitar and has a fair heft to it. It is by no means a heavy guitar, but it doesn’t feel like a toy either. The body is shaped ergonomically with cutaway sections to fit nicely against the player’s body and arm.

The neck is quite thin, which I personally find comfortable but may not suit your style of play. Similarly, the frets are quite small which, while making it a great beginner or children’s guitar, could potentially not be to everyone’s taste.

One aspect that has caused me some annoyance is the saddle adjustment screws on the bridge. I found the ones on my Pacifica to be quite sharp and uncomfortable against the heel of my strumming hand when playing palm muted, or anything else where I needed to rest my hand against the bridge. I’ve been reluctant to file or sand them down to remove the sharp edges as they already require very small allen keys to adjust and I don’t want to ruin them. In the end I placed a piece of tape along the top of the saddle screws. It didn’t look the prettiest but it was far more comfortable.

Overall the body seems durable. I have had mine for nearly a decade and, while it’s not seen the most use during that time, it hasn’t exactly spent all of its days in a padded box, either. Despite this, there are little more than a few nicks and dents on the body.

The Pacifica lends itself well to many styles of music. It can produce a nice clean tone that suits blues, but it can also go harder for some rock. That being said, the humbucker is not as hot as I’d like, and I think it would struggle with a guitarist looking to play something really heavy.

If you’re looking for something to learn on the tone of this guitar is good enough, but if you’re planning on gigging with it you should definitely try before you buy. That being said, the Pacifica produces a good enough sound that you can probably get where you need to be with the right amp, pedals and a bit of tinkering.

The guitar also takes a tremolo bar for those who like that sort of thing.

To sum up, this is a good guitar. 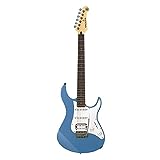 The Yamaha Pacifica is an excellent entry level guitar. That being said, its quality of build and solid tone make it a great gigging guitar as well; one that doesn't cost you an arm and a leg to the point that you’re afraid to take it out of the bag in case it gets damaged.

The combination of single coil and humbucker pickups adds some versatility that plays right into the budget guitar ethos. Specifically, the kind of guitarist who can afford a $600 or more guitar is probably the same kind of guitarist who can afford multiple guitars for different uses, but if you’re looking to spend $200 on a guitar, you might need it to wear many hats, so to speak.

In conclusion, if you’re just getting started with guitars, or if you’re looking for an inexpensive guitar, you can’t go wrong with the Yamaha Pacifica 112J. It is definitely not the cheapest guitar on the market, but the quality you get for the price you’re paying is well worth the extra money. This is a guitar that can do a job for you, and one that you won’t need to replace in a few years time because it hasn’t been able to stand the test of time.