Christopher Peruzzi is surviving a zombie apocalypse. He is the author of "The Undead Rose" in the "Once Upon An Apocalypse" anthology.

If the zombie apocalypse were upon us, where would you run?

These are things you should know and plan for before it happens - not during. You are being "hunted" by creatures that are no longer living. They don't eat, sleep, go to the bathroom, or even breathe. Most importantly, they are relentless. They won't stop until they get fresh, living, meat - like you, for instance.

But what about taking your chances on the water?

These are unthinking automations. They don't fear anything - they certainly won't fear going into a pool or a lake... or even the ocean. If you run into the water, you have every reason to believe that they will shuffle along after you eventually.

The good news is that zombies don't swim. There's some actual thinking that goes into the mechanics of doing the Australian crawl or the breast stroke - even a dog paddle. You need to think about how to swim. Zombies don't have that kind of brain power. They just know you as "wet food".

Here's the bad news: Zombies don't swim. When you think about it, it's just as George Carlin said about swimming "not being a sport." Swimming is a way to keep from drowning. Human beings are afraid of drowning because it leads to death. And when we think about why people drown, it's because they've fallen below the water line and can not breathe.

What you have to be worried about is if a zombie, while under water can grab at your legs while you're trying to stay afloat. If the water is deep, this isn't an issue. However, if the water is shallow (under 20 feet deep - taking the average height of a human being as six foot tall add the length of three feet of length to a zombie arm plus the five feet or so height of the swimmer), you have a very real possibility of being dragged under.

I would also be wary of lakes as you have no idea if there's a zombie already there. Should a zombie be underwater, there is very little motivation for it to resurface unless there is something to attract it. Should it sense a swimmer, it may move toward it. 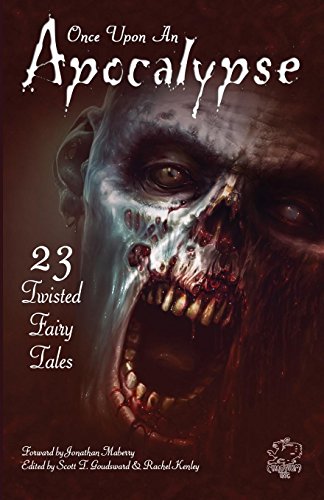 Once Upon an Apocalypse: 23 Twisted Fairy Tales
If you love twisted fairy tales and you like zombies, this book is for you. This anthology will give you the best of both worlds.
Buy Now

Boats and Off Shore Oil Rigs

Provided that you have a well stocked boat with plenty of fresh water, a boat isn't a bad plan for escape. You are safe so long as your supplies hold out. A boat offers relative safety and will certainly allow you and your party a decent night's sleep - depending on how large the boat is.

If you are with a small party of people and you suspect that one of them is infected, you can (depending where you are geographically) drop them off at a nearby island or dispose of them at sea after "euthanizing" them. The legality of this is questionable given the freedom of the seas and a charge of "murder".

Please be aware that a boat is a mixed blessing. If you do not have sufficient supplies and fresh water and gas being caught out at sea can be just as deadly as being with the undead. A boat escape should be considered in the event of a quick get away and that precautions have been taken.

Along the same lines, there are offshore oil rigs. Offshore oil rigs have the advantage of being well stocked and away from heavy population zones. The chances of a break out or infection on an oil rig are slim to none. They are usually well fortified, well stocked, and have weapons on board. Given that these structures are somewhat self sustaining in regards to power, this would be a great location to sit out the infection, until the eventual resupply of stocks are needed. However, given the quantity of food and medical supplies on the structure, that should not be for a long time.

Escape by water is a mixed blessing. It may be more dangerous to attempt swimming than running away from a ghoul. As zombies don't need to breathe air, they are good underwater walkers and may already be lying in wait for an unfortunate swimmer to be pulled under. Swimming is only a viable option in deep water where you can see the bottom - like a deep indoor diving pool. In trying to use this option as either an escape or a way to bide your time, be aware that you will need to tread water for any time you will spend swimming - and that can be tiring.

On the flip side, a boat or ship can provide temporary relief, provided that it is well stocked and reliable. It can allow a small team of people comfort and relative safety for extended periods of time. Offshore oil rigs are even better as they have well stock provisions on board and will not be readily available to any of the walking dead.

The key to all of these escapes is preparedness and planning.