The misdemeanor that defined a generation

For me, it wouldn't be Thanksgiving without listening to this classic performance piece by Arlo Guthrie, released in 1967.

The Alice's Restaurant Massacree relates a largely-true and very funny story of small-town drama, clashing cultures, and the struggles of the 1960s, all set to an memorable (but never tiresome) guitar line.

Video: An illustrated version of the original song!

Andr3w Time made this video illustrating "Alice's Restaurant" with his own original drawings.

Here are the complete lyrics to

What I love about "The Alice's Restaurant Massacree"

This is Arlo Guthrie performing "Alice's Restaurant" in 2005 at Farm Aid.

How to play "Alice's Restaurant"

It all started two Thanksgivings ago . . . - This is the church building where Alice and her husband, Ray, lived.

This building, formerly Trinity Church, was purchased by Alice and Ray as their home. It is the site of the "Thanksgiving dinners that couldn't be beat" and the center of Arlo's Massacree adventure.

Arlo Guthrie now owns the building himself. It is now the site of the Guthrie Center, an interfaith church founded in 1991.

How do you feel about "The Alice's Restaurant Massacree" by Arlo Guthrie?

A serial killer played an excerpt from "Alice's Restaurant" (the scene where Arlo is in the shrink's office!) to the jury during his trial.

Here's the story from the Los Angeles Times.

The site in Stockbridge, MA, where Alice once ran her restaurant is still a restaurant and is now called Theresa's Stockbridge Cafe.

Have a look around and see if you see something that would make a great gift, for yourself or for someone else.

"The Alice's Restaurant Massacree" was featured on an album with the same title, and is also on Arlo Guthrie's "Greatest Hits" album. 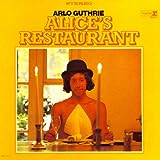 Alice's Restaurant
The full album on CD. The other songs on this album are: * Chilling of the Evening * Ring-Around-a-Rosy Rag * Now and Then * I'm Going Home * Motorcycle Song * Highway in the Wind
Buy Now 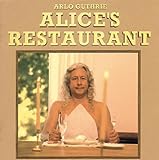 It was also made into a movie!

In 1969, the "Alice's Restaurant" movie was released. For the film, a fictional storyline was added to the true events from the song to create a story about '60s counterculture. Arlo Guthrie played himself in the movie, as did arresting officer William Obanhein and Judge James Hannon, who presided over the court case. Alice and Ray Brock acted as extras in the movie, but did not play themselves. Their characters were portrayed by Pat Quinn and James Broderick.

Here's the Wikipedia article on the "Alice's Restaurant" movie.