Alvin Stardust was a product of the British glam rock music era, scoring several big hit records during the 1970s.

But Alvin Stardust was not always Alvin Stardust. He was born plain Bernard Jewry, but as a 19-year-old in the early 1960s he became Shane Fenton, lead singer with the band The Fentones. The group had a few moderately successful singles, the biggest being Cindy's Birthday in 1962. However, The Fentones did not last too long and Shane Fenton disappeared into obscurity.

By 1973, glam rock was in full swing in the UK and Shane Fenton had now become Alvin Stardust. Dressed in black leather cat suits, matching leather gloves adorned with a huge ring or two, and sporting a brooding look, he arrived with the first of his big hits My Coo-Ca-Choo.

He enjoyed the limelight during most of the early to mid-1970s, dropping out of view for a while, and then returned to the British music charts in the 1980s.

He continued to perform until his death, mainly in musical theatre and on the oldies circuit, but here we take a look back to his most successful period, when glam rock ruled the music world during the Seventies.

Get The Platinum Collection | Available from Amazon UK.

The Death of Alvin Stardust

It was even more successful in Australia where it became one of the biggest songs of 1974.

It's one I have in my record collection, too!

Jealous Mind was Alvin Stardust's only Number One song in the UK, reaching the top of the charts in the Spring of 1974.

The song also afforded him another unrestrained performance! 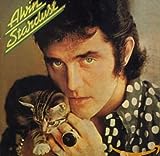 Another two UK Top 10 hits from 1974 were these glam rock favourites Red Dress, which peaked at Number 7 and You, You, You which managed to reach Number 6.

The last two UK Top Twenty singles for Alvin Stardust in the 1970s were these retro 1960s sounding tracks:

The last Top Forty hit for Alvin Stardust in the 1970s was Sweet Cheatin' Rita, a track which has more than a resemblance to the kind of rock'n'roll produced in the early 1960s.

Alvin Stardust returned to the UK music charts in 1981. The video selections here include all of his 1980s hits,.

In the mid-1970s, Stardust contributed to the Green Cross Code road safety campaign. You might remember his catchphrase You must be out of your tiny minds as he helped children learn safety as pedestrians.

A Wonderful Time Up There 1981

A Wonderful Time Up There

I Won't Run Away

The Clock on the Wall, sung by Alvin Stardust, was a contender for the UK's entry in the Eurovision Song Contest of 1985.

It finished third, losing out to Vikki's Love Is as the UK representative that year.

About This Alvin Stardust Fan

What Are Your Memories of Alvin Stardust?