I must have literally watched Don Bluth's animated movie Anastasia (1997) hundreds of times.

I drove everyone in my house crazy watching Anastasia the movie over and over again. When I was not watching this princess movie I was singing the songs from the Anastasia movie soundtrack in the car or the shower. I guess you could say I was obsessed with the grand duchess Anastasia, but what a great movie to obsess over.

The goal of this page is to introduce Anastasia (1997) to people who have not seen this animated master piece and to reintroduce this movie to those people who have seen it "Once Upon a December".

Contents at a Glance

Below find a promo for the Anastasia movie. Consider the promo the appetizer for the main dish. It will give you a taste of what Anastasia has to offer.

Answer a Quick Poll on the Anastasia - What do you have to say?

Have you seen Anastasia?

What Don Bluth's movie Anastasia is about?

Anya is young woman who does not know who she is or where she comes from. Her only clue is a necklace that says, "Together in Paris." When Anastasia is discharged from the orphanage, where she had been living since she was 8 years old, she makes her way to St. Petersburg in hopes of finding her way to Paris. When she is told she needs an exit visa a local woman advises her to find Dimitri. Dimitri is a con man who is currently looking for a Princess Anastasia impersonator. When they meet Dimitri sees his Anastasia and Anya sees her chance to get to Paris. Little does either know that Anya is the real missing Russian Princess Anastasia and that the deceased Rasputin is hunting her to put an end to the Romanov line forever.

Anastasia [Blu-ray]
Anastasia (1997) now available on blu-ray. One of the great supplements you will find on the blu-ray, which also appears on the DVD of Anastasia, is Learn to Draw with Don Bluth. He teaches the viewer how to draw characters from the movie. The following character tutorials included are: Anastasia, Dimitri, Rasputin and Bartok. Some other supplements included are: the full Bartok the Magnificent movie, "Journey to the Past" music video by Aaliyah and sing-a-longs. For a complete list of special features available or to purchase Anastasia on blu-ray from Amazon click the Anastasia photo to the left.
Buy Now

Did you know Bartok has his own magical movie called Bartok the Magnificent?

The Art of Anastasia: A Twentieth Century Fox Presentation

3. I love that the main characters are indivuals and throughly fleshed out.

4. The music is wonderful

5. It has the classic struggle between good and evil.

The Characters From Anastasia

From Anastasia to Rasputin

I think a movie makes it or breaks it on the basis of its characters. I can watch a movie with horrible visual effects, filming, and even sound if I care about the characters: Where they are coming from and where they are going. I find all the characters in the movie interesting and well developed. Below find a brief introduction to some of the characters you will meet in Anastasia:

Anya/Anastasia grew up as an orphan with a lot of spunk. She has a mind of her own and does not let anyone push her around. I like that she is a strong heroine and she is the one who gets to save the day and defend her families, honor.

Dimitri grew up in the palace and worked in the kitchen. When the czar fell and St. Petersburg became gloomy Dimitri became a con artist. He and Anastasia have a back story of him getting her out of the palace. Dimitri is fun and a great sparing partner for Anastasia.

Vladimir is an older gentleman who is Dimitri's co-hort in the plan to defraud the Empress. He is does not have a hard outer shell like Dimitri does. Before the palace fell Vlad was a member of the imperial court. He seems like a suragate father to Anya, but a friend to Dimitri. He is a good buffer between Anastasia and Dimitri.

Rasputin is the bad guy. He is a former holy man who places a curse on the Romanov family so that they will all die. In pursuit of his evil purpose he dies. He becomes stuck in limbo because his curse is left undone; Anastasia is still living. In limbo his body is falling apart, his eyes pop out of his head and limbs fall off. Rasputin is part psychotic, part evil and part self loathing.

There are other character in the movie but of lesser importance than the previous listed characters; however, their characters are distinct and well developed

Below find a couple of quotes I enjoy from Anastasia. They may not be the traditional picks but they are quotes that stick with me for what-ever reason.

Meet the Talents behind the Voices

Who voiced the characters in Anastasia?

Here is a list of the big name actresses and actors called on upon to voice my favorite characters.

I love the music in Anastasia. These songs are beautifully written and emotionally gripping. My personal favorites are Journey to the Past, Learn to Do It and Once Upon a December.

You can listen to the songs on the Anastasia Sountrack by clicking the picture to left. If you like any of them you can purchase these songs on Amazon.

Other tracks on this album are: A Rumor in St. Petersburg, In The Dark Of The Night, Learn To Do It (waltz reprise) Paris Holds The Key, At The Beginning, Journey to the Past done in Spanish. 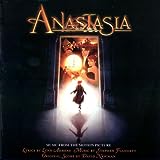 Anastasia [Music From The Motion Picture]
Buy Now
Everyone knows I love Anastasia but how about you? Have you seen this movie yet? Do you absolutely love it? Even if you disagree with me I'd love to hear your thoughts so please leave a comment below.

Sources used on this Anastasia movie page include:

What Did You Think of Anastasia? - Share your thoughts about Don Bluth's Anastasia the movie