Sophia Loren's ANGELA is a gritty and dark 1978 film shot in Montreal, Canada. It is based on the life of a prostitute who becomes a waitress when she learns she is pregnant and needs to support her child. The father of the child returns from the Korean War, disbelieves that the little boy is his and arranges to have the baby kidnapped by his employer, a mob boss. Many years later, the boy (now a man) and the mother meet.

Angela is not a high quality film and is actually considered a subpar production which was passed onto video quickly. When I watched this movie on VHS, I wondered if the tape was bad or if the quality was bad initially and now I know that it was not just the quality of the actual videotape in my possession. Apparently, even the DVD version is not a crisp and clean movie. People find fault with the transfer from video to DVD but the fault, apparently, lies with the quality of the original movie.

Angela is available as part of a two-movie DVD set called The Sophia Loren Signature Collection or on its own as a VHS videotape. On this page, you'll find more information about the movie as well as sources to buy your copy.

Click here to order your copy of Angela from Amazon.

It is rumoured that Sophia was unhappy during the making of this film because she was missing her children, was working under severe cold temperatures (welcome to Canada) and was having problems with the director, Boris Sagal.

Amazon Description Of The Storyline

"Can a mother's love for her son (who was kidnapped at birth) be discovered by the two of them 20 years later? Angela (Sophia Loren) knows who was responsible, but fighting the mob, a deranged husband, and having no way to find her son leaves her hardened and cold. But then a young man comes into her life. . .and a bond grows. A bond deeper than physical attraction. . .a bond that is stronger than life itself. John Huston is menacing as the mob leader, Sophia Loren is superb as the beautiful yet long-suffering mother, and the action is explosive as the forces of good and evil collide head on." ~ Amazon

My Thoughts on Angela in 100 Words or Less

This was a gritty movie and at the beginning I had a hard time being absorbed by it. However, when I was taken by the story I felt that Railsback, the love-struck young man, and Sophia, as the aging mother, both did good jobs with their roles. I cared what happened to them. I cannot help wondering if part of the dark picture and poor quality of this film was intentional...it certainly, in my mind, conveyed an appropriate mood for the subject matter.

A tough review for a movie that was not well received even in 1978.

"A fumettone, nothing more than a cheap soap opera which Sagal has directed with conscious skill, scrupulously pursuing every clich in regard to both imagery and lines. If it were only a feuilleton one could forgive it, but it's a feuilleton which aspires to Greek tragedy, and the difference between this story and Greek tragedy is as great as that between Beethoven's Ninth and Migliavacca's mazurka." - Hugio Buzzolan, La Stampa, 23 apr 1978

Who Should Watch Angela?

Order Your Copy of Sophia Loren's Angela Movie From Amazon 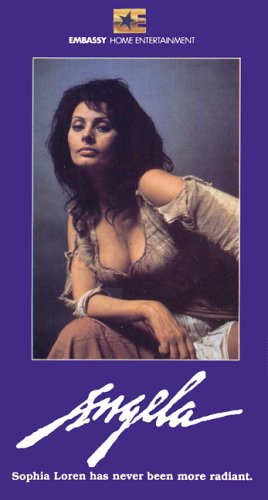 The movie Angela is marked simply, 'Not Rated.' However, the subject matter of the mob, kidnapping and incest are definitely NOT child fare. By today's standards though the sexual scenes are not explicit and the level of violence is much more reasonable and were not enough to make me very overly uncomfortable. I guess my 16-year old could see this although I would not want him to. I believe he would find the movie intriguing but the incest disturbing and I would definitely have been uncomfortable watching it with him. 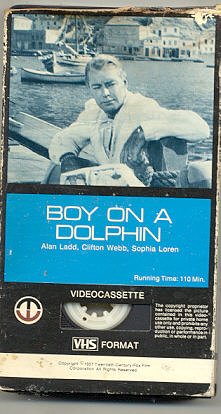 Boy On A Dolphin
Boy on a Dolphin
Buy Now

Here are two more rare and well-received Sophia Loren movies. Unfortunately, the first is available only on VHS videotape in North America and the second is a somewhat hard-to-find DVD.

Boy on a Dolphin

Boy on a Dolphin features Sophia Loren as a Green diver who finds a beautiful item on one of her trips to the bottom of the sea. She attempts to sell it illegally with her boyfriend but falls in love with another man in the meantime…

Have you seen this Sophia Loren movie, Angela? What did you think? Are you a fan?