Are you looking for an anime like Maid Sama (Kaichou Wa Maid-Sama)? There are plenty of animes that offer similar themes.

Maid Sama follows Misaki Ayuzawa, the head of the student council at a formerly all-boys school (now co-ed). She rules with strict discipline but has a secret: She works at a maid cafe. One day a popular A-student Takumi Usui discovers Misaki's secret, and agrees to keep it in exchange for spending time with her.

Maid Sama combines comedy and romance to create a fun and exciting anime experience. Other themes present in the anime are school, maids, and Tsundere (character development where characters start out cold or hostile and slowly warm up to other characters).

Leave a comment at the bottom of this page to share which anime is your favourite, or suggest your own.

An Anime With A Love Rectangle

Toradora! is often one of the first anime suggested when Maid Sama comes up. This anime revolves around a love rectangle and features similar comedy, romance, and tsundere.

The story focuses around Ryuuji Takasu. It is a new school year and not only is he lucky enough to be in the same class as his best friend, but also his long-time (and undisclosed) crush.

However, along with his crush comes her friend (Taiga Aisaka), and it just so happens that she has a crush on Ryuuji Takasu's best friend.

Together they agree to secretly help each other achieve their heart's desires.

Toradora!, Volume 1 (Standard Edition)
Toradora! follows the journey of an unlikely duo as they form an alliance to help each other win the hearts of the ones that they love. The anime will have you hooked from episode one, with its well-constructed characters, strong storyline, and great comedic dialogue.
Buy Now

Special A is a romantic comedy that is lighthearted, fun, and enjoyable. It follows the story of two rivals (a boy and a girl) who slowly start to develop feelings for each other.

Hikari Hanazono is the main character. She has been second to Kei Takishima ever since they were first met at the age of six. While Hikari considers Kei a rival (and somewhat of a friend), Kei is very much in love with Hikari (and everybody knows this, but she is too dense to notice).

In order for Hikari to continue her rivalry with Kei she enrols in the same school he goes to. The anime picks up at their enrolment in Hakusenkan, an elite school where Hikari and Kei are the top students.

Special A: Purchase the Complete Collection

Special A: Complete Collection
Up until the age of six, Hikari was the best at everything she did. Then she challenged Kei to a wrestling match. Since that moment, she has tried to beat him in something, just one thing, but thus far she has had no luck. Little does she know that he is in love with her, and that is only the beginning . . .
Buy Now

A Unique and Popular Anime

Ouran High School Host Club follows the school life of Haruhi, a tomboy student who comes from a poor family but attends a school for the mega wealthy (thanks to a scholarship).

One day she accidentally enters the weird but highly popular Ouran Host Club. As she tries to leave, she accidently breaks a vase and is unable to pay for it. The Ouran Host Club then make her stay and do odd jobs to pay for the vase, until they decide she is more valuable and interesting as a club member.

The club decides to fix her up with a male uniform (thinking she is a boy) and that is when they discover that she is in fact a girl. This makes her an instant hit in the club and they decide to have her keep up the charade even after the truth is revealed.

As the series develops, true friendship bonds appear and Haruhi finds herself receiving acceptance that she never thought possible.

Ouran High School Host Club - Complete Series (Classic)
Ouran High School Host Club offers comedy along with great character development. The Ouran Academy is an institute for the wealthiest families, but Haruhi Fujioka attends thanks to her scholarship. One day she accidently stumbles upon the Host Club and breaks an expensive vase. This accident puts her in debt to the club, and that is just the beginning of her adventure.
Buy Now

A Wonderful, Light-Hearted, and Supernatural Anime

Fruits Basket follows the journey of Tohru Honda, a 16-year-old orphaned girl who gets invited to live in the house of a classmate and his cousins. This classmate is none other than the handsome Sohma Yuki—but it turns out that he and his family are cursed.

The families curse causes them to turn into the animals of the Chinese Zodiac if they are hugged by the opposite gender. This creates an interesting adventure that combines comedy, romance, supernatural elements, and heartbreak.

Fruits Basket is praised by fans and critics for its light-hearted and intellectual presentation set against a dark background.

Fruits Basket Box Set (Viridian Collection)
The Sohma family is cursed, leading them to be isolated. When a member of the family is hugged by a person of the opposite gender, they transform into an animal from the Zodiac. Their secret is safe until Tohru Honda comes along.
Buy Now

School Rumble follows a simple storyline that has been done numerous times before, but something about it will have you hooked and wanting more. Every episode is fun and humorous and the series is often described as "anime newbie-friendly" due to its lack of reliance on Japanese-style humor.

The story follows Tsukamoto Tenma, an ordinary second-year high school student who is in love with a classmate (Karasuma Ooji). As is true in most high school romances, Tsukamoto is unable to come forward and admit her feelings. To make matters worse, she has recently discovered that Karasuma will be leaving at the end of the year.

Behind the scenes, another classmate is in love with Tenma and slowly becomes depressed as he is unable to confess his feelings.

School Rumble: The Complete Series (Seasons 1-2 With OVA)
School Rumble offers a well-written story and lovable characters. Tsukamoto Tenma is your ordinary high school student in love with one of her classmates. S,he is unable to admit her feelings though and that problem is made worse when she discovers that her crush is leaving at the end of the year.
Buy Now

Kimi ni Todoke (From Me to You) is based on the best-selling manga series. The anime has seen similar success, ranking in the top of 20 for anime sales (for six months after release). From Me to You is well-rated and makes for a great anime.

The story follows Sawako Kuronuma who has one wish in her life: to make friends. However, she finds this very difficult. Everybody she meets cowers away in terror due to her resemblance to Sadako (the character from the Japanese horror movie, The Ring). Her life starts to change rapidly though after she befriends a popular and easy-going male classmate.

Soon she starts to realise that there is hope for friendship and maybe even some romance. 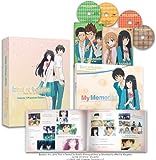 kimi ni todoke -From Me to You- Volume 1 Premium Edition
Sawako Kuronuma has always had a difficult time fitting in. Some say it is her black hair, others say it is her hushed voice, and others say it is her resemblance to a horror film's main character. Whatever the reason, that doesn't stop Shota Kazehaya from making friends with her.
Buy Now

Kimi Ni Todoke (From Me to You): Review

Itazura Na Kiss is a romantic comedy set in a high school. The anime follows Kotoko Aihara, a girl in her third year of high school, who has a crush on Naoki Irie, a popular, smart, and sporty guy.

She decides to finally tell him how she feels, that she has loved him from afar for as long as she can remember. Naoki however rejects her quickly and doesn't want anything to do with her. That is until fate intervenes and Kotoko moves in with Naoki and his family after a minor earthquake damages her house.

What will this mean for their relationship? Will it develop into something that Kotoko has always wanted?

Itazura Na Kiss (It Started With A Kiss) Episodes 1-25, Complete
When Kotoko finally admits her love for a fellow student named Naoki, she is quickly rejected. However fate comes to the rescue when an earthquake damages Kotoko's house, forcing her to stay with her dad's close friend—who also happens to be Naoki's father.
Buy Now

An Anime With Some Sexual Themes

Hatsukoi Limited offers something different to the romance/comedy genre. This anime has a strong focus on exploring feelings, along with the characters' day-to-day lives.

The series follows the intertwined stories of eight different middle school and high school girls. As the series progresses, their stories begin to overlap more and more, to form a main story around the classmates and their relatives.

Each episode focuses on a different character, although they also overlap and make appearances in other stories. By the end of the series, there is an unusual web of relationships and love interests.

Hatsukoi Limited Complete Collection
Hatsukoi Limited follows a group of high school and middle students as they discover love and just how infectious it can be. Each episode focuses on a different character, with intertwining features in each episode. The characters are diverse and unique, making each episode a very enjoyable experience.
Buy Now

An Anime Targeted at Girls

This anime is probably the least like Maid Sama on this page (thus why it is included last on the list), but it is a highly popular and well-rated romance anime that attracts a large female audience.

The story follows the adventures of three girls: Kouichi Sanada, Kazuki Aihara, and Mao Mizusawa. The girls deal with the roller coaster ride that is high school romance and the drama that comes with it.

The series deals with love, heartbreak, and love triangles. Overall it is a great romance and drama series, though it lacks the comedy aspect of many other animes listed here. This anime is best-suited to viewers who enjoyed the romance aspect of Maid Sama more than the comedy.

Kimikiss: Pure Rouge Complete Collection
Kimikiss Pure Rouge explores young love. It will have fans of the romance genre entertained from start to finish. The anime is light-hearted, sweet, and honest. With the complete collection you get all the episodes in one box.
Buy Now

What Is Your Favourite Anime Like Maid Sama? Do You Know of Others?