Susan enjoys both reading and writing about interesting people and the stories behind their success.

Do You Have Your Collectible Betty White Wall Calendar?

Betty White fan? Of course you are! Then you need a collectible Betty White pin-up Calendar.

Everyone's favorite 94-year-old, Betty White is well known for all the comedies and game shows she's appeared on, and more recently for her guest host spot on Saturday Night Live in May 2010. Following her appearance in the most popular commercial of Super Bowl 2010, the idea was hatched to nominate Betty for the SNL guest host spot. A Facebook page was set up where a few hundred thousand of her 21st century fans joined forces to ask if Betty please could have the job. The Saturday Night Live powers-that-be couldn't refuse, so the appearance was arranged and went off without a hitch. The publicity was huge and the younger generation who might not have heard of the busy actress and comedian otherwise became new fans. Since that time, Betty's career has continued to heat up (not that it's ever cooled down) as she added yet another successful sitcom, Hot in Cleveland, to her resume. In early 2015 came the announcement that the show would not be renewed, but Betty White continues to be hot as ever.

Could Betty top the SNL appearance and the new sitcom role? Only as a pin-up girl. Enter the Betty White wall calendar, published in 2011, where Betty posed in 12 monthly photos with an occasional "hunk" of a guy thrown in for good measure. No matter that 2011 is long gone - these calendars are still available and a must-have for any Betty White collector!

You just can't go wrong choosing a collectible Betty White calendar as a gift for someone who spends hours watching Golden Girls reruns every week. Could that person be you? If you don't have this collectible calendar yet, we'll do our best to help you out, though they're becoming more scarce. Scroll on down the page to see what you don't want to miss if you're a fan.

POLL: Are you a fan of Betty White? - Big fan? Little fan?

So tell us, are you a Betty White fan?

Hurry before it's too late to order your Collectible Betty White wall calendar!

A collector's item from 2011 and still a must-have for Betty's fans! Both new and used calendars are still available, and still selling and yes, the price on this very collectible piece of show biz history continues to go up! 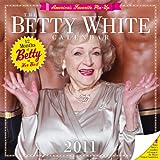 Betty White 2011 Wall Calendar
Check availability of new calendars, prices and conditions for the used calendars that are available here by clicking on the "Buy Now" button.
Buy Now

About the Betty White Calendar

Here's what you need to know.

No mistaking that face - or figure! This is just a sample of the poses you'll find from this popular pin-up girl.

Who is Betty White?

A video, a brief bio, and a book to help you get to know Betty better.

This popular actress and comedian's entertainment career spans over 70 years.

Betty White's fan base spans at least three generations, garnering fans from her Password days back in the 1950s, her stint as Sue Ann on The Mary Tyler Moore Show in the 1970s, Rose in Golden Girls, and most recently in the TV series Hot in Cleveland.

Betty was born January 17, 1922, and her acting career began shortly after graduating from high school in 1939. During the 1940s Betty worked in radio, eventually with her own show. From 1952 to 1955 she starred in the television show Life With Elizabeth where she she won her first Emmy award. She has continued to stay busy in television in many roles up until the present, including regular appearances on the game show Password from 1961 to 1973. Betty married Allen Ludden, the host of Password in 1963; Ludden died in 1981.

You can read more of Betty White's bio and about her nonstop career, including her six Emmy awards, in this Wikipedia article.

Image is the back of the 2011 Betty White Wall Calendar.

Here We Go Again: My Life In Television
Betty has had a long and very interesting career in television, starting back in 1949. Those of us in the baby boomer generation were babies ourselves when she got started, but most know her from the many seasons she spent on "Password," on "The Mary Tyler Moore Show," and "The Golden Girls." Current generation fans have enjoyed her in multiple movies as well as in her popular sit-com "Hot in Cleveland," and now she even has her own reality show, "Off Their Rockers." She just doesn't stop! Fans will enjoy reading this book all about a very memorable lady and her amazing career. 4.6 stars from her loyal readers and fans.
Buy Now

Betty & Friends: My Life At the Zoo - Everyone knows about her love for animals big and small.

A large segment of Betty White's fans follow and appreciate her for her love of animals. She's been associated with the Los Angeles Zoo for years. Anything related to this well-loved humanitarian will make a great gift for a fan who's also an animal lover!

Betty White: One of the Most Fascinating People of 2010 - So says Barbara Walter. Watch the interview.

Who do you know that would love a Betty White calendar? Thanks so much for visiting this page. We'd love for you to take a minute and sign our guestbook.