Are you fascinated by the circus? Perhaps by the history of the circus, by the amazing human feats of acrobatics, by the animals or just by the shear entertainment value?

I stumbled across this 2010 documentary film called 'CIRCUS' by accident and picked it up because of my lifelong fascination with everything to do with the circus.

Circus tells the story of a year in the life of The Big Apple Circus during which this non-profit circus company performs an amazing 350 shows. It follows the circus from town to town and from set up to take down. It peeks into the lives of all of the circus folk, in the circus tent and behind the scenes.

If you love the circus, you will be riveted to your television screen by this film and, if you are like my 17-year old son, it may even make you want to run away and join the circus.

Click here to order your copy of Circus (2010) from Amazon on DVD or blu-ray disc.

The Big Apple Circus is a one-ring, European-style circus.

A typical North American circus has three rings. The Big Apple is European in style, having only one ring, which means that you are closer to the action and you are able to focus on the single performance in front of you, instead of needing to try and watch the action in three rings at the same time. Watch the official Youtube trailer from the television show to get an idea of what the program is like and about.

Buy Your Copy of Circus on Amazon

Buy Your Copy of Circus from Amazon 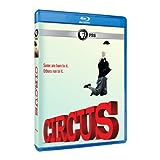 The Big Apple Circus 25th Anniversary Book shares the story of the Big Apple Circus, the lost tradition of the circus, the excitement, the artistry. From 1977 when a group of struggling circus performances erected a green tent in Lower Manhattan and changed the history of the American circus to the present. This book will help you look back and learn more about this New York City circus."For anyone who has seen the Big Apple Circus live, this book belongs on your bookshelf. And for anyone who has not seen this circus live, this book will make you want to see it." - Charles Beck

Would you like to join the Big Apple CIRCUS?