Working with a choir of beginners

Often it takes a while for beginners to learn how to sing in a choir. Learning to sing harmony takes practice and exposure over time. Usually, the more experienced members of the choir will be role models and influences to the newer members as they learn how it all works.

But in some cases, such as a brand new church ministry or when working with a youth group, you might not have any experienced members. What is the best approach for those situations?

This page takes a look at strategies for working with a beginning choir and also has some suggestions of the type of songs that work best for a choir that's just starting out.

Prepare them to work

Get a feeling for where the choir members are mentally and spiritually. If they are excited and earnest about ministering in the choir, they will be ready to do the work that it will take to become an effective choir.

If they're more casual about it and think of it only as a fun activity or something to do with their friends, set them straight. From the very beginning, impress on them that they are working for God and God wants their very best. Make sure they understand that a choir is not the same as a glee club.

As the choir director, your demeanor during rehearsals will help them understand what is expected. Even if you're not a preacher, take a little time to talk about the spiritual impact that gospel music can have both on the hearers and on the performers. When they see how seriously you take your work, they should get the message.

Let your choir know when they're doing well

Even beginners can be excellent at their own level

You're not expecting them to sound like Hezekiah Walker's choir when they first start out. So make sure that they don't fall into discouragement comparing themselves to choirs they hear on the radio and elsewhere. When they are working to their best ability and reaching the level of accomplishment that you are looking for, make sure you let them know. "Excellent! That was really good."

At the same time, you don't have to put up with sloppy efforts. If you're doing arrangements that are appropriate for their level of skill, you can expect them to do a good job on them. Practice them on it until they're getting it right. This helps them understand that singing in the choir is not a casual activity.

Below are examples of gospel choir songs that use a lot of unison and would adapt easily to a choir of beginners. They have some harmony parts as well, but in my opinion, these harmony parts could be redone as unison and the song would still be strong.

I hope these examples are a springboard for you to think of other songs you know that have the same advantages for a new choir. 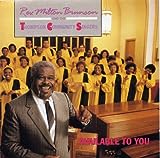 I'm Available To You
Buy Now

I'm Available to You by the Thompson Community Singers

The fancy part in the middle (the "ah ah ah" part) can easily be left out, and you still have plenty of great song. 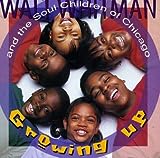 Shabach - by Walt Whitman and the Soul Children of Chicago

This is the song that I talked about earlier on the page, the one that is an example of a lyrical melody. 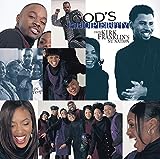 My Life Is In Your Hands
Buy Now

There is another Kirk Franklin song "Why We Sing" that is also very popular and mostly in unison.

Also, both of those songs have pauses after each line, which would give the director time to mouth the words of the next line in case anybody forgets.

When your choir is ready to bring it up a level

As they get more experience, start to introduce more challenging music. Here are some ideas: 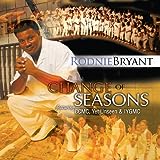 It's often easier for different sections to stay on their parts if the parts are not mirroring each other.

Try a song that has a section where the sopranos, altos, and tenors are each singing different words or different rhythms. The video to the right is an example: Say the Word by Rodnie Bryant

The opening section has two things going for it. First, each part is singing a different rhythm. Second, the soprano part is high enough that only the sopranos would want to sing it. It's unlikely that the altos would start sliding up to the soprano note.

If possible, it could help greatly to give them practice CDs where they can hear their part all by itself and drill it over and over. I have a whole page about making practice CDs for your choir. It takes some work, but if you have the resources it could be very valuable. There are also practice tracks for some songs that you can download from ChoirParts.com.

Start rehearsing a song well in advance of when you intend to sing it. The more time the choir has to get familiar with the music, the better.

"For who hath despised the day of small things?" (Zechariah 4:10)

A beginning choir is a beautiful thing. Seeing new converts or young people singing about the goodness of God with sincerity and fervor can touch the heart in a unique way. Encourage your choir members to put themselves into their singing and you will be a treasure to everyone who hears you. God bless.

This is not gospel, but it is a great example of working with a children's choir. Getting children to sing in parts is a challenge. The approach here is doing just two parts instead of three. The result is very nice. This must have taken a LOT of work.