The leading lady of The Phantom of the Opera, Christine Daae has plethora of lovely costumes on the Stage and on the Screen.

The Costumes were design by Maria Bjornson (stage) and Alexandra Byrne (movie). Both the stage version and the movie version have costumes that are very similar and some that are very different. But what production has the better costumes for Miss Daae?

It's a subjective question but let's compare the costumes side-by-side to come with a conclusion.

The first time we see Christine she is wearing a slave girl costume. Both versions of this costume are revealing but in different ways.

In the stage show it has a plunging neckline and rope skirt. Velvet panels make up the bodice and gold cording covers the seams. There is a lot of beaded elements around the neckline and around the shoulders. She also wears a crown.

In the movie, the costume has an expose midriff. It has a floral print on the bodice. The neckline and waistband appear be made out of leather with some metal details. The skirt is made from a lightweight fabric.

Point For the stage version.

Elissa, Think of Me

During the Hannibal rehearsals, Carlotta, the opera's Diva, quits and Christine takes her place. Midway through the song in the stage show Christine's slave costume transforms in the leading lady's costume. The show does this by removing the rope skirt and switches it for a grander skirt that has patterned fabric, heavy embroidery and gold tassels

The movie doesn't have the limitation of real time so movie version is completely different. In the movie the costume goes from a Minoan slave girl to Empress Elizabeth of Austria. As lovely as it, it's really out of place in terms of the context. Make you wonder what the movie version of Hannibal is about. There had a some context for this costume design it could have worked since it's beautiful costume but the movie has make us question things about the show within a show and stuff like that takes a person out the movie.

While both dresses are lovely I think the Stage Show is better in terms of context.

Which Think of Me Gown do you like better?

After Christine's triumphant debut she wears a white dressing gown with ruffles. This dressing gown is wore during the show's most memorable moments; going through the Mirror, The Phantom of the Opera, Music of the Night, and the first unmasking.

In the Stage Show, Christine wears a long white robe with long sleeves. It has lots of ruffles at the neckline, cuffs, hem, and along the opening. The Hannibal corset is wore under the dressing gown adds a pop of color.

In the movie Christine's "dressing gown" is more like lingerie. It consists of a sheer dress with high slit, a white corset, and white robe with ruffles and pink sequins.

While I do like the movie costume, it doesn't work within the scope of the story. In the stage version, after Christine's debut, Raoul comes to see her and invites her to dinner. Immediately after Raoul leaves and the Phantom makes his presence known and lures Christine through the mirror.

In the movie between Raoul's invitation and the Phantom's appearance Christine changes into this costume. I will also point out that during this period of Christine's changing the opera goes from having a sea of people in it to a ghost town. It would have made more sense to either have her go down to the Phantom's lair in her Think of Me dress, or have her change into a dress for dinner, or if she was in this costume prior to Raoul's entrance. The Phantom's arrival loses impact if it took him 20 minutes or so for him to react to Raoul's Dinner invitation.

Aesthetically and context wise I think the Stage Show costume is better.

Phantom of the Opera Figurine 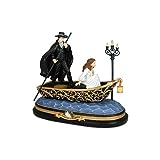 In the opera Il Muto, Christine plays a mute page who crossdresses to fool the Count. It's a simple costume which consists of a shirt and breaches. There is not much to this costume but I think I like the movie version better, it's a little bit more fun and colorful.

Point for the movie version.

Which Il Muto Page Boy costume do you like better?

All I Ask of You

During Il Muto, the Phantom demands Christine plays the lead of the Countess. Before she can take the stage panic ensues and Christine and Raoul rush to the roof and profess their love to each other.

In the Stage show, Christine changes into a 18th century gown and wears blue cloak with ruffles. The movie version she doesn't finish changing and she is in a corset with pink details, a pink skirt and red velvet cloak. It is sexier than its stage counterpart.

Point for the movie version.

Which All I Ask of You costume do you like the best?

Masquerade occurs during a costume party. In the stage show Christine's costume is a "Star Princess." It softy fades from pink to blue and has lots of star details, off-shoulder ruffle sleeves, a shorter hem and a crown.

In the movie, Christine dresses up like herself. She dresses in a pink gown with a bustle and the dress has ruffles and flower details.

I'm not sure why she's exempt from wearing a costume at a costume party but again this dress doesn't work within the context of the story. There are theories that the color reflects Christine becoming tainted by the Phantom.

It's a pretty dress but it's not a costume for a Masquerade. Though who knows given all the flowers on her dress maybe an hour before she left for the party she just put a ton of flowers in her dress and claimed she was a flower. Makes sense given the odd costume choices in the film.

Point for the stage show. 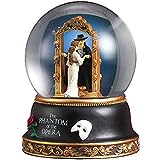 Wishing you were Somehow Here Again

In the movie, Notes gets split so it occurs right after Masquerade and follows Wondering Child. Christine wears a white Blouse with a black bustle skirt for Twisted Every way, which is hard to get a decent picture of.

During Wishing you were Somehow Here Again and Wondering Child, Christine wears a black dress with a plunging neckline with lace detail. She wears a black cape with a maroon chiffon scarf wore over her head and around her neck. I suppose the idea behind the costume is that it's a mourning dress. However Christine just pull this dress off a rack in the opera so it's unclear if it's a costume owned by the opera or her own garment. Either way the dress lacks the fine details of its stage counterpart and looks like a stab of black on screen. Based on the context of the story I'd say that stage version is the better costume.

Aminta, Point of no Return

Aminta is the character that Christine plays in the Phantom's opera, Don Juan Triumphant. She wears this costume during the The Point of no Return and briefly during the Final Lair.

In the stage show, Christine wear a dress that is Flamenco inspired with a 17th century flair. It has a ton of details like layers of ruffles, lace, beads, embroidery, a shawl etc. It's a very extravagant costume.

Conversely, the movie version is simpler and more seductive. Christine is dressed like a Gypsy. She wears a lace chemise, flower details, dark red floral corset with bead trim along the hem, a skirt with ruffle detail , a red rose in her hair and gold bracelet completes the look.

I like both looks and despite being so different they have a similar vibe. I think they both work within the context of the story but I have a soft spot for the stage version but the movie costume grows on me more every time I see it. This is a hard one but movie gets the point by a hair.

Which Point of No Return Costume do you like better?

Phantom of the Opera Live

The wedding dress is a gown that Phantom made for Christine. Both dresses features diagonal elements. In the stage show it's the ruffles on the skirt and an overlay draped is at an angel in the movie. However beyond that the dresses are different.

The stage show has a lots of lace and ruffle details, a wide waistband, a sweetheart neckline neckline, 3/4 sleeves, buttons, and a bustle. It's a very opulent dress and a great dress to end the show.

The movie dress has the same spirit as the one from the stage show. The dress features an off shoulder neckline with short sleeves. The bodice is identical to the Think of Me dress. It has an asymmetrical overlay on the front and drapes around the side and covers the skirt which has ruffles much like the stage show. It's not as opulent as the stage version but it's still lovely even if doesn't the same wow factor. Despite that, I prefer it over the stage version, I like its subtly. Point for the movie.

While do find the movie's costumes to be lovely many of them don't work within the context of the over-all story and compared to the stage show and they lack the same grandeur.

I think that the Stage Show has the superior costumes, But what do you think?

Which Version's Costumes do you Prefer?

What Costume of Christine's is your favorite?