50th Anniversary: Light at the End 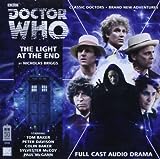 The Light at the End (Doctor Who)
The 50th anniversary special for classic Whovians: Doctors 4-8, each with a companion (Leela, Nyssa, Peri, Ace and Charley), plus cameos by Doctors 1-3 and many more companions. Oh, and a classic villain. This is an epic story, although like The Five Doctors it's a bit of a pastiche.
Buy Now 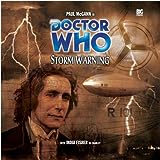 Storm Warning (Doctor Who)
Now I understand why Paul McGann, the eighth Doctor, has such a huge fan following on Tumblr, despite only appearing in the Doctor Who movie. I'm making up for lost time and listening to as many as I can. Here's the first one, also introducing Charley Pollard, an Edwardian girl who's pulled the classic "Cabin Boy" ploy aboard an unusual ship, seeking adventure.
Buy Now

The fiftieth anniversary special of Doctor Who had me reminiscing about the Doctors of my childhood — Jon Pertwee, Tom Baker, Peter Davison, and the delightful Sylvester McCoy of my college years. (Yes, in those days, we talked about Doctors by actor name instead of number. That's Three, Four, Five and Seven to you). I haven't kept up with the reboot, although I keep meaning to; the first few episodes looked quite promising.

But wait! Why didn't anyone tell me? There are years and years of new audio episodes with the old Doctors, all of those whose actors are still alive. Many of my favorite companions — Nyssa, Leela, Romana, Tegan, Jo Grant — are reprising their roles, some of them getting their own spin-off series. There's hundreds of these stories.

There's new, great companions, from old history professor Evelyn Smith to alien shapeshifter C'rzz to Charley Pollard, Edwardian Adventuress. There's Iris Wildthyme played by Katy Manning (formerly Jo Grant), a vodka-swigging zooty old Time Lady whose TARDIS is stuck as a red double-decker bus. There's the Eighth Doctor played by Paul McGann, who really is one of the best doctors ever, when given good scripts to sink his teeth into.

If you're like me, you have particular favorite companions, so just click through to Amazon and hunt for more "Big Finish Doctor Who" titles, looking for your favorite Doctors and companions. Some of them go right back to the Troughton and Hartnell — excuse me, the first and second Doctors. Some are series, but most are self-contained stories.

Sometimes campy and cheesy, sometimes heart-wrenching, exciting, and powerful, this is the classic Who I grew up with. Now it really does feel like time travel. We can jump back and revisit fifty years' worth of great characters and Doctors, and suddenly they're speaking to us again, old friends and childhood heroes whom we may not have heard for twenty to thirty years.

For instance, here's a brand-new pair of adventures from one of my favorite TARDIS teams who were last on TV back in 1980:

Big Finish Doctor Who is even wilder than some of the original stories, finding all sorts of reasons to crisscross the timelines and throw different companions and Doctors together. Because...well, because the actors are available, but also, because it's FUN.

Exhibit A: Nyssa of Traken and Ian Chesterton timing up as lab partners and science buddies to deal with dinosaurs and Daleks in this wild story at right. It's cheesy, but it's one of my favorites.

That is, if you don't count the ten jillion great Nyssa stories. I have every one of them. But I have a bit of a thing for Sarah Sutton. ;)

Whichever classic Doctor is your favorite, whichever companions, there's almost guaranteed to be some new stories with them. Just as important, many of the companions and Doctors that TV scripts didn't do justice to are better by far in the Big Finish audios. Six, Seven, Mel and Peri in particular have become quite popular thanks largely to their better Big Finish episodes.

And, as Colin Baker has observed, the radio plays have the best sets and special effects!

Where to find them? Amazon has many of them, or go to the Big Finish audio website to order CDs or purchase digital downloads (cheaper), and look out for their frequent web sales! The first 50 episodes of the "Main Range" are usually available at a good discount.

Who's your favorite Doctor?