Classic Nick refers to that time in Nickelodeon's history where slime flowed from every kid's nostrils, pies in the face never got old, and saluting shorts became the new Pledge of Allegiance.

From here, you can find out everything there is to know about Old Nickelodeon Shows from the Golden Age. This lens will be your guide to the facts and shows that have been tucked away in your nostalgic lock box for far too long. Have a look around, and relive your childhood!

What do you mean by "Classic Nickelodeon"?

The Definition of a Classic Nickelodeon Show

Before we start, I think it is important to define what exactly a Classic Nickelodeon Show is. We will use the following definition:

Any show produced and aired on Nickelodeon no later than 1996 that has become synonymous with the furtherance of the Nickelodeon brand during its Golden Age of Programming. This includes live-action programming, animated programming, game shows, and series that were not originally produced or aired by Nickelodeon.

The Canon - The Complete List of Classic Nickelodeon Shows

In 1977, a new TV channel launched in Columbus, Ohio on the then QUBE Cable System. The channel was called Pinwheel and the first shows it aired included Video Comic Books-cartoons from around the world, Nickel Flicks, America Goes Bananaz, By The Way, and Pinwheel, which was essentially a puppet show.

On April Fools Day, 1979, Pinwheel expanded to Buffalo, NY on the QUBE Network before going nationwide as Nickelodeon in 1981.

In 1982, when Nickelodeon acquired the Canadian sketch comedy show You Can't Do That On Television, a revolution was born. It was here that Slime became the most well-loved and sought after element of many Nick shows, giving Nickelodeon an identity among children that was unparalleled in television history. In keeping with this theme, Nickelodeon adopted the famous "orange splat" logo in 1984.

For most of the 80's, along with Pinwheel, Mr. Wizard's World, and You Can't Do That on Television, Nickelodeon aired mainly cartoons produced in foreign countries. The more popular included The Adventures of Little Koala (Japan), Noozles (Japan), Grimm's Fairytale Classics (Japan), DangerMouse (United Kingdom), Bananaman (United Kingdom), Count Duckula (United Kingdom), and The World of David the Gnome (Spain).

In 1986, a new game show titled Double Dare would take slime and messiness to the extreme. 4 days after Double Dare's premiere on Nickelodeon, ratings had quadrupled, and within the month, Double Dare had become the highest rated series ever on cable television.

In 1987, staying true to the original nature of the network, Nickelodeon created the Kid's Choice Awards, giving kids their very own forum in which to vote for their favorite stars from sports, television, movies, and music.

By the start of 1989, in an effort to give the preschool audience their own block of programming, Nickelodeon introduced the first incarnation of its Nick Jr. brand. The distinctive feature of this block was a logo of the larger orange "Nick" and the smaller blue "Jr." with "Nick" portraying a parental figure to "Jr." This was conveyed through different species or objects such as rabbits, trees, or human figures. The Nick Jr. block typically aired between 9am and 3pm showing the usual foreign cartoons and Pinwheel (replaced by Eureka's Castle in 1989) as the main feature.

In 1990, Nickelodeon Studios was officially opened in Orlando, Florida, complete with theme park attractions, production facilities for sitcoms and live tapings, and a slime geyser to top it all off.

1991 marked one of Nickelodeon's greatest achievements with the introduction of Nicktoons. On Sunday, August 11, 1991 at 10am EST, Doug would be the first in-house produced Nicktoon revealed to the world. The two other "original" Nicktoons, Rugrats and The Ren & Stimpy Show, would air later that same day.

It was at this time that Nickelodeon began to take full advantage of their newly built production facilities. In addition to Nicktoons, Nickelodeon began production on Salute Your Shorts (1991), Clarrisa Explains It All (1991), Welcome Freshmen (1991) and Fifteen (1991), Nickelodeon's first and only teenage drama. 1991 also saw the creation of two new game shows: What Would You Do and Get The Picture, as well as two new concept shows: the still running Nick News and the educational space travel show Nickelodeon Launch Box.

Nickelodeon also began to show airings of the short-lived Hi Honey, I'm Home and the now cult classic Land of the Lost, both of which originally aired on ABC.

However, 1991, marked the end of one of Nickelodeon's most well-loved shows, Hey Dude. Nickelodeon, in an effort to cut costs by moving all production to their Orlando studios, canceled Hey Dude due to the demands and costs created by taping the entire show in the Arizona desert.

1992 introduced two new game shows: Nickelodeon Guts, which was a physically competitive game show in which three kids maneuver through obstacles in an effort to win a piece of the giant mountain known as the Aggro Crag, and Nick Arcade, which was a revolutionary game show where kids solve puzzles for a chance to actually become part of a video game and play for a grand prize. A re-imagining of a 70's science-fiction show called The Tomorrow People was also produced by Nickelodeon in 1992.

1992 also introduced SNICK (Saturday Night Nickelodeon), a two-hour television programming block that aired on Saturday nights. SNICK debuted with two Nick favorites, Clarissa Explains it All, and The Ren & Stimpy Show and the premieres of Are You Afraid of the Dark? and Roundhouse.

In 1993, Nickelodeon aired a new Nicktoon named Rocko's Modern Life as well as a new variety show titled Weirnerville. This year also saw the airing of the first full season of The Adventures of Pete and Pete, which originally aired as mainly 1-minute shorts and 5 half-hour specials from 1989-1992. Also, at this time Legends of the Hidden Temple crossed moats and dodged temple guards to make it to our television sets. 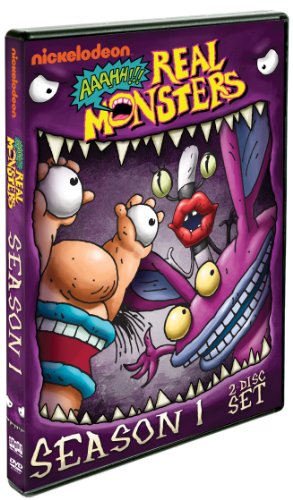 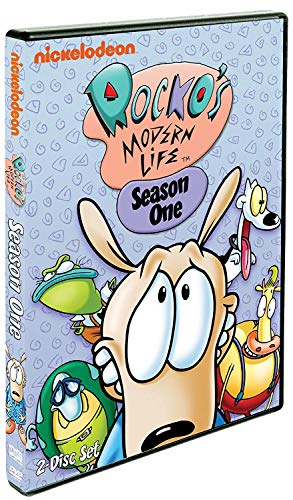 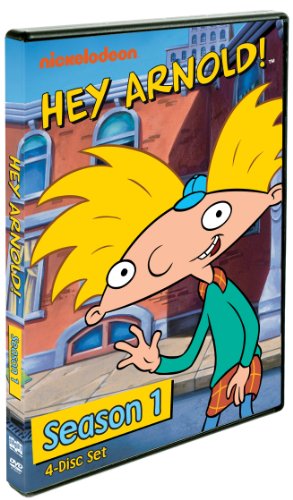 In 1994, Nick Jr. was officially formalized. This year saw the introduction of "Face" who was an animated host of sorts that introduced shows and segments. Shows at this time included Allegra's Window, Little Bear, Gullah Gullah Island, and The Busy World of Richard Scarry.

1994 also introduced a new Nicktoon, Aaahh!!! Real Monsters as well as two new sitcoms: The Secret World of Alex Mack and the short-lived My Brother and Me. Also, at this time, All-That made its debut, Nickelodeon Guts became Global Guts and reruns of Flipper could be found.

1996 brought the debut of two new Nicktoons: Kablam, and Hey Arnold. Kenan and Kel, the All-That spinoff, also made its debut in 1996.

1996 also marked Nickelodeon's movie debut with the release of Harriet the Spy.

It was around this time, and through 1998, that many classic Nick shows began to be taken off the air completely. Shows such as Salute Your Shorts, The Adventures of Pete and Pete, Clarissa Explains It All, Hey Dude, The Secret World of Alex Mac, and many of the classic game shows could no longer be found. And shows such as The Mystery Files of Shelby Woo and The Journey of Alex Strange just didn't have the lasting appeal of their classic predecessors.

Nicktoons also suffered from diminished quality as The Angry Beavers, Oh Yeah! Cartoons, The Wild Thortenberrys, CatDog, and Rocket Power all debuted in the subsequent years. It is often said though, that Spongebob Squarepants was the Nicktoon to end all Nicktoons and the sign that the Classic Nickelodeon era had officially ended.

Clarissa Explains It All - Season One
Buy Now

The Ren & Stimpy Show: The First and Second Season (Uncut)
Buy Now
Nickelodeon has paid attention to their fans and they have not forgotten their roots! There is now a block of programming on TeenNick called The 90's Are All That. You can check out the main website on Nick.com and like it on Facebook to connect with more fans of the show. It currently airs from midnight to 2am every night with an encore over the next two hours.

Currently, the programming block will be showing the following:

Are You Afraid of the Dark?

The Journey of Allen Strange

Legends of the Hidden Temple

The Mystery Files of Shelby Woo

The Ren and Stimpy Show

The Secret World of Alex Mack

Future programming is set to include:

My Brother and Me

The Adventures of Pete & Pete

Also, All That and Kenan & Kel are now showing on Nickelodeon starting at 8pm!

Despite fan letters and pleas, in 2005, Nickelodeon officially closed down Nickelodeon Studios in Orlando, Florida after moving all production to their animation studios in Burbank, California and One Astor Plaza in New York City. All live action shows were moved to Nick's production facilities in Los Angeles, California.

The Slime Geyser was removed in May 2005, followed by the trademark Nickelodeon sign in 2006.

The 1992 time capsule, in which kids from that year voted on items important to them at the time, was removed and reburied at Nickelodeon Family Suites in Orlando, Florida. It is still scheduled to be opened at its originally scheduled date in 2042.

Beginnings, Endings, and Goodbyes - We Will Miss You, Nick Studios!

Classic Nickelodeon Websites - Resources to Help You Remember Everything!

These are some of the best links available for information regarding Classic Nickelodeon. They are also the sources of most of my information.

So I Don't Get Legally Slimed (Hopefully)!

What is Your Favorite Classic Nickelodeon Show? - Don't Be Shy, They Are All Great!