Brenda is an Ottawa native with a small eBay store. As Treasures by Brenda she sells a variety of new, used and vintage merchandise.

Have You Seen Clint Eastwood in Gran Torino?

Clint Eastwood's Gran Torino is an amazing movie. I just finished watching it with my husband on blu-ray and we loved it. It made me laugh and it made me cry and it was a thoroughly enjoyable story.

Gran Torino was made in 2008 and opened on December 12 in North American and on January 9, 2009 elsewhere. Clint Eastwood directed and starred in the film, which was his first acting role after a four year break. The film includes a cast of individuals who are mostly Hmong. Eastwood's younger son, Scott, appears as 'Trey' and his older son provided the musical score.

The story is that of a widowed Korean War vet named Walt who has grown apart from his family and angry at everyone. A young neighbour tries to steal Walt's 1972 Ford Gran Torino and develops a relationship with the old man.

"When you believe in something you stand up for those beliefs whether or not it is popular to do so at the moment."

Gran Torino Official Trailer - I don't think this movie trailer does Gran Torino justice but it will give you a peek into the film.

"Powerful, moving, and timeless, Gran Torino represents the ultimate in straightforward movie making, where theme and emotional context overpower every other facet of the experience." From Bluray.com.

"Combining elements of classic Eastwood characters from years past, this quiet, affecting study of one man's social evolution suits both the actor's strong, silent persona and the director's affinity for introspective, relevant works. With the sure hand and economic style that has defined his cinematic canon, Eastwood takes a simple story and tells it in a straightforward manner, without all the flashy technique that often sabotages the work of his peers. The result is another unforgettable effort that sticks to the ribs and touches the soul." - High-Def Digest

Gran Torino was said to be

Moviegoers voted as they do with their wallets and spent $78 million at the box office to see this film and Gran Torino and Eastwood both received good reviews. Many people felt that there would be award nominations for this movie but there weren't.

Do you think Gran Torino was snubbed?

This could be MY response to the poll but Mom of Sons summed it up perfectly.

"The Academy went down yet another notch in my estimation for all but ignoring this masterpiece from the master, Clint Eastwood....The group of unknown Vietnamese actors are PERFECTLY led by Clint Eastwood, as the silent, grouchy, proud, imperfect, highly principled American guy we all know -- or wish we knew better. Gran Torino is poignant, at times funny, and inspirational. It could be Clint Eastwood's career best, Dirty Harry come full urban-American circle. Shame on you, Academy of Motion Pictures Arts and Sciences. You goofed by ignoring a lot of classics we all love now, and you goofed on this, big time. (And they wonder why ratings for the Oscar show continue to dive, year after year.)" - Mom of Sons

This is not a Dirty Harry style Clint Eastwood movie. However, I think that it is important for you to know that Gran Torino is rated R or restricted because of violence. There were a few moments that made me uncomfortable. However, I think that sometimes some violence is an important part of a good story and, in the case of this movie, the violence is a part of the struggle for safety and security in the neighborhood.

Another consideration for viewers of this movie is it contains many racial slurs. It is the story of a cantankerous old man who has opinions that are not acceptable today. The main character hates his neighbors because they are not white and makes frequent offensive comments. However, he also hates everyone he comes in contact with including his own family although at least they are not subject to racial slurs.

Despite these two issues, many feel that this may be one of the best movies Clint Eastwood has ever made. 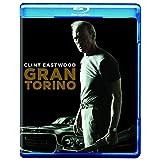 Clint Eastwood's 1972 Gran Torino was an accessory to the movie and not a major character but it sure is beautiful, don't you think?

Are you a Clint Eastwood fan? Does Gran Torino sound like a movie you would enjoy?