The Music of Colin Blunstone

The Best of Colin Blunstone

While you may not be familiar with Colin Blunstone's music, I am sure you are aware of his voice. If you turn on any Oldies radio station his clear, heartfelt vocals can be heard daily on songs like She's Not There, Time of the Season and Tell Her No.

This is because Colin Blunstone was lead singer of the Sixties British Invasion band, The Zombies. Seemingly more appreciated in the United States than in their homeland, The Zombies scored several hits on the US charts before disbanding in 1968.

Group members Rod Argent and Chris White went on to form the band Argent, while after a short hiatus, Blunstone returned to the music business as a solo singer. This time his voice graced the UK charts for a short time in the early 1970s.

Under appreciated by the majority of the record buying public, many of Blunstone's albums are now currently available, including his most recent, On the Air Tonight, released in 2012.

This was Blunstone's second solo single in the UK, on which he sings about the end of his relationship with actress and model, Caroline Munro.

Colin Blunstone's third single - and his first hit - from March, 1972.

Following the success of Say You Don't Mind, Blunstone's next single charted in the UK Top 40 in late 1972.

Colin Blunstone: How Can We Dare to Be Wrong

Colin Blunstone's final UK chart entry of the 1970s was this plaintive ballad from 1973.

The title of Blunstone's next single describes the song perfectly: Wonderful. A criminal shame that this was not the massive hit it deserved to be.

This next single was a more up tempo affair, but even this change of direction proved unsuccessful sales wise.

The title track from Blunstone's 1976 album was a cover of an Elton John/Bernie Taupin number. Even with this influence, the song failed to chart.

This single from 1978 is a track from Blunstone's album Never Even Thought. Despite a wonderful melody and powerfully wistful vocal, this release went the way of his then recent output.

Colin Blunstone: I Want Some More

An album track from the 1972 album, Ennismore.

Colin Blunstone: Losing Your Way in the Rain

Colin Blunstone made a guest appearance in 1979 on an album by Mike Batt. This is his contribution.

Absolutely beautiful song released in late 1981. Sung in Blunstone's trademark plaintive way, this is a lyric and melody for anybody missing that special someone in their life.

What Becomes of the Broken Hearted - Colin Blunstone & Dave Stewart

You'll recognize this one. A hit for Blunstone in 1981, this is a cover of the classic Motown hit by Jimmy Ruffin.

"When You Close Your Eyes"

Colin Blunstone With The Zombies

Spotlight on The Zombies 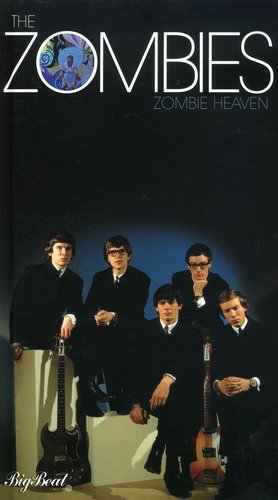 Everything that you can conceivably think of that has been recorded by The Zombies. Forget all the other Greatest Hits releases, this is the collection that every fan will need and everyone new to the music will want to own. Did I say everything is here?

About This Colin Blunstone Fan

Are You A Colin Blunstone Fan?