Country line dancing is for anyone who loves to move to the music.

Line dancing to any type of music is a great way to get even a chair-bound wall-flower or shy guy to join the party and feel like part of the crowd. On many occasions, I've seen one line dance turn those timid folks into dance floor junkies, with grins on their faces for the rest of the night. Including me!

The World's Longest Country Line Dance - Or, rather, the longest line dance period.

Read more about the creation of this dance and the making of the video in Choreographing the World's Longest Line Dance, written by the choreographer herself on the CMT.com blog.

Now Want To Learn How To Do This Line Dance? - Choreographer Jenny Cain will show you in this video

Learn To Line Dance At Home

Here's a selection of really good instructional line dancing videos you can have fun with in your own living room.

In addition to being a plain ol' good time, line dancing is also a great way to get in shape and stay that way -- a truly fun form of exercise that doesn't really feel like you're exercising (at least, not in the gym workout kind of way). You only need to learn 10 moves to do this whole routine, and once you learn 'em,you can put some umpf and style into the dance and burn even more calories.

Invite Some Friends Over

Or don't. You can still line dance and burn some fat in the comfort and privacy of your own home alone. If you liked the first video, this one add more dances to your repertoire.

You'll know at least some -- but probably all -- of the songs on this one, like Boot Scootin Boogie, Cotton Eye Joe, The Devil Went Down To Georgia, and more. You can line dance or just shake your country thang however you like, wherever you like (except maybe in the car ... that's not really a good idea). 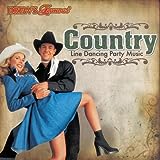 Get Ready to Take Your Line Dancing Public

You'll learn popular line dances like the Watermelon Crawl and Slap Leather, with split-screen video close-ups. The instructor shows you each dance from both front and back so you can learn just as though you are standing right behind her.

Each dance is followed by a complete review and then the Brooke & Company dancers will join you for a fun group practice round.

This DVD also includes music-only practice tracks so you can keep working on the moves at your own pace once you've learned the basic steps.

If you like this video, volumes 2 and 3 are also available with more popular dances to learn. 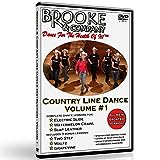 What Do You Think Of Country Line Dancing?

Do you like to line dance ... or at least watch other people do it?

You don't have to know the moves to get out there and try.

All line dances I've ever seen have involved "walls." This doesn't mean there have to be four walls around the dancers, but the principle is the same whether there are or not.

The dances usually are made up of a sequence of moves done facing one direction and then another and another, until you end up facing the original wall.

At the end of one full sequence, though, dancers will be facing in the original direction or any of the other three walls. Then the sequence will start over again using that wall as the new frame of reference.

It's not important to know the names of the steps in a line dance, but rest assured that they repeat. So if you don't get it the first few sequences, just keep following along and you'll get it.

And try to find someone to watch -- someone who's doing the basic moves. Some "advanced" line dancers will throw in variations of the steps or a little extra flair, which is fine ... but you can add that stuff later, once you've gotten the original sequence down.

What I've often done is start off just turning in the direction of the dancers and staring at their feet, doing a move here and there until I get the pattern figured out.

Believe me, no one cares what you're doing or not. In fact, I think most people are just impressed that you're trying.

And many country dance clubs -- like Steppin' Country in Walla Walla, Washington and Spurs Too in Midland, Michigan -- offer line dancing lessons, sometimes for free, so if you have one in your area, give them a call and find out.

See a list of some of the many country line dance lesson locations below.