Creepshow is a series of short stories written by Stephen King, much in the same style as Tales from the Darkside, The Outter Limits, and Tales from the Crypt. Each story is gruesome, and while considered to fit into the horror genre does have touches of humor. The Creepshow book is illustrated and published in a comic book format. The Creepshow movies are several horror short films with a campy feel.

I've seen all three Creepshows too many times to count. My dad and big sister are huge horror movie fans, so I was watching Creepshow and other scary movies way before I should have been. I always liked Creepshow because it's creepy and gruesome, but also silly and fun.

Here's the book that started it all. Creepshow by Stephen King is a collection of five creepy tales told in a comic book style with super vivid illustrations.

This is the original Creepshow movie. Creepshow consists of five short horror films all based off of Stephen King's short stories. They are directed by George Romero, a favorite among all horror movie enthusiasts.

Creepshow
Inspired by the controversial E.C. Comics of the 1950s--which also provided the title and inspiration for the popular Tales from the Crypt TV series--director George Romero and screenwriter Stephen King serve up five delightfully frightful stories. Utilizing comic-book panels, animated segues, and exaggerated lighting and camera angles, Romero and cinematographer Michael Gornick come very close to replicating a horror comic in film format. The results mix fine acting with the morbid sense of humor and irony that made the E.C. books so popular in their heyday. Actors such as Leslie Nielsen, Hal Holbrook, Ted Danson, Adrienne Barbeau, Ed Harris, E.G. Marshall, and even King appear in the stories, which include tales of a sinister father's day celebration, a mysterious meteor, seaweed-draped zombies, a monster in a crate, and a cockroach-phobic millionaire. Fiendishly fun fare from one of horror's most famous directors. --Bryan Reesman
Buy Now

Stephen King and George Romero did it again with this Creepshow sequel. Most movie watchers and critics agree that this one isn't as good as the first, but it's still a must see among horror movie enthusiasts and fans of King or Romero.

Creepshow 2 (Divimax Edition)
What is it about hitchhikers that makes them such a sure-fire bet for horror? This question is addressed in the final segment of Creepshow 2, another Stephen King-George Romero collaboration. "The Hitchhiker" is the simplest and best of the three tales on display here, with Lois Chiles as a cheating wife who just can't seem to get rid of a hitchhiker... no matter how hard she tries. The collection gets off to a slow start with "Old Chief Wood'n Head," a sleepy story of Native American justice. "The Raft" is a passable teens-in-peril number, but it worked better on the page than on screen. Romero adapted the King stories but emphatically did not direct, which accounts for the drop-off from the kicky fun of the first Creepshow. King appears as a dimwitted truck driver--a foreshadowing of Maximum Overdrive? In any case, this one's for diehard fans only. --Robert Horton
Buy Now

Romero and King had no part in the writing or directing of this final sequel to the Creepshow franchise. This one feels more campy than the other two, but I still find it to be a lot of fun to watch. The tales in Creepshow 3 are more of a black comedy than horror, but they are still quite gruesome so be sure there are no kiddies in the room. 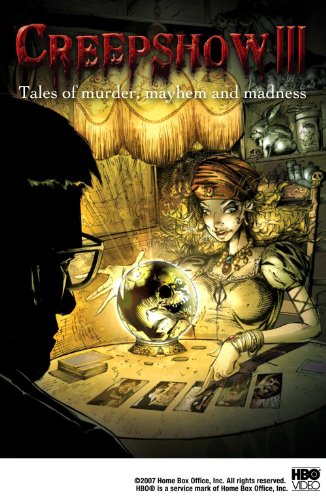 Creepshow III: Tales of Murder, Mayhem and Madness
Creepshow III consist of five vignettes of horror and humor. In "Alice", a teenage girl finds her family has changed... or maybe it's her? In "The Radio" security guard Jerry has no ambition. That is, until he buys a radio which starts dictating what he should and shouldn't do, from eating, to stealing, to murder. "Call Girl" tells the story of a young guy who hires a call girl, Rachael, who turns out to be a man-hating serial killer. It soon becomes apparent that he also keeps a deadly secret. In "The Professor's Wife", prankster Professor Dayton is finally getting married. But when two of his students meet his beautiful fiance, they become suspicious that she's another one of his inventions. Dr. Farwell is abad doctor with a bad attitude. He causes the death of a transient by giving him a tainted hot dog to eat, and the dead guy starts following the Doc everywhere.
Buy Now

Which is your favorite Creepshow?

Do You Love Creepshow? - Thank you for visiting.