From Hootie & The Blowfish to Pop Country Music

On Oct. 27, the festive atmosphere of the Arizona State Fair entered the arena with thousands of concert-goers, eager to see Hootie & The Blowfish frontman-turned-solo country artist, Darius Rucker, perform.

When the doors of the Veterans Memorial Coliseum opened, those streaming in, many enjoying corn dogs, funnel cakes, and other sinfully scrumptious fare, ranged from young children and teens to folks well into their senior years. Some sang along to tunes broadcast from the KMLE Country 108 booth outside the concert hall, the music mixing with the pop, rock, and techno pulsing from hundreds of brightly-lit rides and booths. The smell of Texas-sized smoked turkey legs and fried delights filled the warm evening air.

The sounds and smells changed dramatically on the other side of the doors of the 14,870-seat coliseum--from a mishmash of music genres outside to purely country, and from overpowering culinary aromas to cooled, unadulterated indoor air--but the smiling faces were constant. While concert-goers are usually a happy group full of anticipation, the popular carnival in combination with this performance seemed to heighten the mood.

The following is my review and overview of the concert as a fan of Darius, both as Hootie and as a Country star....

All of the photos on this page were all taken by me, Deb Kingsbury. All rights reserved.

A Quick Visitor Poll: Are You a Darius Rucker Fan? - You're most welcome here even if you're not a fan (yet).

Perhaps you know the music more so than name? There are plenty of links to MP3 files of his songs and videos below where you can have a listen.

When the lights went out signaling the show was about to begin, the traditional big cheer filled the hall....

The lights came up just enough to illuminate Darius Rucker's six-man band, the Carolina Grey Boys, as they launched into the uplifting 2010 country hit, This, co-written by Darius along with former American Idol judge, Kara DioGuardi, and record producer Frank Rogers.

Moments later, the lights powered on full force as the man himself took the stage to another roar from the crowd, his bright smile carrying to the back of the arena. And that personality and sense of fun never faded throughout the show, which included an assortment of songs from his most recent release,

Charleston, SC 1966, the title celebrating his hometown and the year he was born, to cuts from his highly successful freshman country creation, Learn to Live, released in 2008, and Hootie & The Blowfish fan favorites from their multi-platinum 1994 album, Cracked Rear View. Several covers were also on the song list, compliments of country stars Brad Paisley and Hank Williams Jr., classic rock hit-makers, the Steve Miller Band, and pop icon, Prince.

Dressed as though he'd just come from the fair himself, in faded jeans, a black Nike ball cap, and a lime-green t-shirt picturing Kermit the Frog and three of his Muppet friends mimicking the Beatles Abbey Road cover, Darius looked as comfortable on stage as he was in his casual clothes. 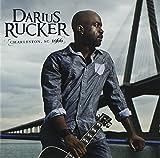 Darius sang many of the songs from this excellent album during the show. You can listen to samples of each of these tunes on Amazon.

The songs on this album include many number 1 hits....

The audience already on its feet, they clapped in time as the band led from "This" into the 2009 Billboard Country Chart-topper, Alright, and Darius moved around the stage, turning his attention to every section of the arena. He smiled and waved, pointed and grooved, clearly having as much fun as the fans.

Hootie & The Blowfish devotees who don't usually listen to country music, do not despair; Darius Rucker's brand of original, contemporary country and even his cover tunes maintain a distinct Hootie flair.

The Craziest Thing, from Rucker's latest album, was up next, followed by the ever-popular blast from his Hootie past, Let Her Cry, now a bit slower than the original and somewhat countrified. Darius took up his guitar and began the song with a solo, his signature baritone as smooth and rich as ever. The band joined in and so too did the crowd. The connection between the men on stage and the audience was unmistakable.

Then it was time for a tribute to a country music great, infused with some Darius Rucker style. "Over the last two years," he told the crowd, "I've been blessed to spend a lot of time with my good friend, Brad Paisley." Darius and the band, who joined Paisley on the highly successful H2O World Tour, now entertained with a fun rendition of Ticks.

Next up was a song about "livin' the laid back country music lifestyle." The delighted screams of young girls accompanied Darius into "Southern State of Mind." The audience then sang along to the hit, "Don't Think I Don't Think About It," off the

Drums pounding and thousands of hands rhythmically clapping led into pop-country favorite, "Love Will Do That." Song number four for the night out of six from Charleston, SC 1966, Love Will Do That featured skillful steel guitar from Grey Boys band member Sasha Ostrovusky.

A father of three, Rucker appeared to be watching the lyrics play out before his eyes as he sang, It Won't Be Like This For Long, a tune about parents adjusting to life with a newborn. His expression changing as he sang about his baby girl growing up, it was clear that Darius was singing from the heart.

"We're Carolina boys, and we play country music!" Darius exclaimed as he and the Grey Boys twanged it up with All I Want to the delight of the crowd, more people rising with each up-tempo number. Whether sitting or standing, no one was completely still. At the very least, mouths moved and feet tapped.

"Country radio has given me a whole new life--a whole new career," Darius told the audience. "I didn't expect it. Thanks, country fans!"

When the enthusiastic cheer subsided, Darius followed up with the ballad, I Got Nothin', then turned things over to his band for some instrumental jamming which flowed into the Hootie & The Blowfish mega-hit, Only Wanna Be With You. The crowd reacted as strongly to the Hootie classics as they did to the Darius Rucker country tunes.

Watch and Listen: It Won't Be Like This for Long

The Crowd Got Involved

....and Darius clearly had a blast.

Keeping it upbeat as the party went on, Darius covered Steve Miller Band's "The Joker, as the audience continued to sing. Darius joked, making faces, pointing, and laughing. The crowd performed its own solos right on cue and sometimes with no cue at all from the man holding the microphone. He sang, "People call me Mau-rice," and the audience added a melodic, "Woo! Woo!" then continued through the next stanza unaccompanied. Now balcony-dwellers too were on their feet. A satisfied round of applause and loud cheers erupted at the end of the song.

An updated version of Hold My Hand once again conveyed that, yes indeed, this was a live performance, not the recorded version straight from the Hootie & The Blowfish record. The crowd went a cappella, singing louder as Darius signaled them to raise the volume. This clearly delighted the band, who smiled at each other over their instruments.

Carolina Grey Boys bassist, John Mason, led into the smooth, up-tempo No. 1 single, Come Back Song. The crowd, including a white-haired, elderly woman in a wheelchair and the little girl standing on her own chair further down the row, knew every word.

Listen: The Come Back Song

Darius sang with heart and plenty of soul.

Darius introduced each of the Carolina Grey Boys, including drummer and band leader, Jeff Marino, and keyboardist, Lee Turner, who inspired Darius and the band to play a snippet of the funk tune, Brick House.

"This song goes out to the real country music fans out there," Darius announced as he commenced with the Hank Williams Jr. classic, Family Tradition, featuring a fiddle solo by Patrick Clark and Turner on the keys. "Yee-ha!" the audience chimed in, in perfect time at the appropriate pauses.

And the crowd went wild as Darius left the stage. The band followed when the arena went dark, then thousands of feet pounded the risers. "Hoo-tie! Hoo-tie!" the audience chanted. An encore was never in doubt.

The Best of Hootie and the Blowfish

Darius still includes many of these fan favorites in his current shows.

I have five out of six names. Can anyone help with #6: the lead guitarist?

To kick off the bonus set, Darius sang about true love in the pop-country ballad, History In The Making, his voice as strong and smooth as it was when the show opened.

Darius then recalled a little history himself, telling the audience how he and former roommate, Hootie & The Blowfish bassist Dean Felber, would buy a case of $4.99 beer and some $1.99 tequila and drink Boilermakers all night. "Here's what happens when I drink tequila," he explained, referring to the chorus of one of his favorite original live country songs, which didn't actually make it onto the Charleston, SC 1966 album: "One tequila and it's 'pass me the salt and lime' / Two tequilas and the whole bar's a friend of mine / Three tequilas and my legs won't work no more / 'Cause it's one tequila, two tequila, three tequila, floor."

"We play this next song because I love it, love it a lot," he said, then finished out the night with energy and soul in his tribute to Prince. "This is for you children of the 80s," Darius said, and he and the audience dove into Purple Rain together. He walked the stage, seeming to acknowledge each and every person in the crowd, as lead guitarist Quinton Gibson nailed the famous solo.

Removing his ball cap to reveal his familiar bald head, Darius autographed the hat and tossed it into the crowd, where it ended up in the hands of one lucky fan in the third row. To raucous applause and farewell-for-now cheers, Darius departed the stage as the band wrapped things up.

When the house lights came back on, the orderly crowd began to file out, still smiling and singing, now to John Denver's Take Me Home, Country Roads. And back into the dazzling, neon-lit night they went. Rides continued to spin, twirl, swing and plunge as the mix of music, some live on small stages, swirled around the generations of those who played and partied on at the fair.

The Arizona State Fair -- the Venue for the Darius Rucker Concert

Have You Been to a Darius Rucker Concert?