Fairy Tale: A True Story is a period film set in 1917, which is suitable for the entire family. It starts at a theatrical presentation of Peter Pan with Peter demanding of the audience, "If you believe in fairies, clap your hands!" In response, the audience roars their belief.

This movie is an interesting story for adults as well as children because it is based somewhat loosely on the a true story of the Cottingley fairies and because it questions the very existence of fairies.

In real life as in the story, two little girls took pictures in their garden of the fairies who lived there. At the time of photographs, the early 1900s, photographic pictures were often taken to be proof that a thing existed as photographic trickery was virtually unknown and the idea that two little girls in Yorkshire, England, could have proven the very existence of fairies was really quite an exceptional idea.

Those pictures soon drew attention from Sir Arthur Conan Doyle (Harvey Keitel), who eventually wrote a book about fairies called The Coming of the Fairies and of Houdini (Peter O'Toole), who was intrigued by trickery of all sorts. The entire world wanted to know if these photos were indeed proof that fairies do exist.

This movie is beautifully filmed, very well acted and entertaining. It does, however, draw criticism for the way it handled the true story. Perhaps, I cannot help but think, it would have been better named simply, Fairy Tale. It does tell of what happened in England and the world when two young girls took photographs of the fairies in their garden but it also takes liberties, adding in details that were not part of the real story. For fear of ruining the movie for you, I will not go into those details but just caution that this is not a documentary nor a totally true-to-live story. If you are interested in reading more about the real story of the Cottingly fairies, you can click here. If you are interested in a fantastic fairy movie, you will find more information including the movie trailer right here on this page.

Click here to order your copy of Fairy Tale - A True Story from Amazon.

"It's not what you see with your eyes that's important...it's what you know in your heart."

“The story is very loosely based on an early 20th-century controversy involving the real Frances and Elsie who faked pictures of fairies similar to the ones in the video. The real girls never confessed, but the video suggests the manner in which the real life photos may have been produced."

Is Fairy Tale: A True Story Suitable For Children?

For those who believe in fairies and even those who don't, this is a lovely movie. I believe it is suitable for many of the children in your life who are old enough for full length movies but caution on two fronts.

Firstly, you should know that the movie is rated PG for mild language. I'm sorry to say that I missed the language so I cannot tell you how bad it was which, I believe, is an indication that the language issue was probably pretty minor.

Secondly, there is a scene that I feel could be disturbing for some children. It takes place on a railway car full of wounded World War I soldiers. The young girl, Frances, befriends a man who has a severe facial injury, which includes the loss of an eye. I believe the movie handled it very nicely with Frances taking but a moment to access this man and his injury and then continuing to befriend him, exactly as I would hope my own children would have dealt with a similar situation when they were younger.

"Charming special effects and appealing heroines, and truly an ambitious meditation on the nature of fantasy and reality and growing up." ~ The Movie Mom

Amazon customer Michael Slater called it a delightful film for all ages with good acting and beautiful photography.

Customer Maudeen Wachsmith said she knew the story behind the film and that she wasn’t disappointed with the movie at all. It is fictionalized and it is HIGHLY RECOMMENDED.

Customer Portia says the movie moves her though she is hard pressed to say exactly why. She says it deals with magic and faith in a beautiful way. 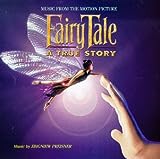 I've been listening to the samples of the The Fairy Tale: A True Story soundtrack as I work...I would have to say that the soundtrack really is magical. To hear the music samples for yourself, you can click on the picture of the soundtrack to visit Amazon.

Fairy Tale: A True Story Books Including The Movie Novel and Storybook

This movie novelization is a Random House book for young readers aged 9 to 12.

The movie storybook is also a Random House book for young readers aged 4 to 8.

The Fairies of Cottingley Glen collectible dolls were issued by Playmate in conjunction with the Fairy Tale movie in 1997. They were sold as dolls or as gift sets, as shown above with Princess Florella packaged with a magical musical toadstool, comb, mirror,toadstool ring and a glow-in-the-dark lantern which 'illuminates' the night.

Are you enchanted by Fairy Tale A True Story?