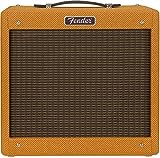 The Pro Junior 15W Class A tube amp is part of Fender’s Hot Rod series and delivers sweet tube tone at volumes that will scare the neighbors. More than a great practice amp, the Pro Junior can handle band rehearsal and even small gigs. Coming in at under $500, it ranks as one of the best value all tube amps out there.

The Sound of the Pro Junior

The stock tubes in the Pro Junior are often Sovteks, which are a little harsh and brittle sounding at distorted levels for many players’ tastes. A popular swap are JJ’s, which are easily obtained from Eurotubes, where Bob will set you up with the right grade tube to suit your sound.

The Pro Junior is ideal for studio work producing those beautifully musical, sparkling clean tones for which Fender is famous. It can also deliver menacing overdriven sounds with outrageous sustain, that can if desired, be allowed to slip into warm feedback.

The PJ takes well to most pedals, and with a good overdrive or distortion pedal you can achieve breakup at levels that will be tolerated by other members of the household. With single coil pick ups, breakup will not occur until somewhere between 4 and 5 and this is LOUD. Humbuckers will get you there a little earlier. For live work, some musician’s grab a pair of them to achieve a stereo effect – great with delay.

One of the lovely qualities of tube amps is the responsiveness to your playing – light touch picking at volume 6-7 will keep your sound clean, but with the tension of unleashed power, while breaking into a full powered two string bend will send shivers down your spine and get the dogs barking.

Some people get a shock when they get this little gem home for the first time, set the volume to 6 (half-way), plug-in, and pictures start falling off the walls with the first few chops. The 15W rating does not convey the volume it can produce and if you live in a space where consideration to the neighbors is a priority you may want to consider an attenuator to reduce the signal strength such as a Dr. Z Airbrake or a Weber attenuator. This will allow you to maintain the tone of a cranked amp with saturated tubes at levels that won’t leave your ears ringing.

Why Choose the Pro Junior?

Unfortunately a lot of young players (or their parents) make the mistake of buying a cheap solid state amp, often with spurious modeling, and their playing suffers because of the muddiness of their tone. Some lose interest in playing altogether. A well-built amp like a Fender Pro Junior is an investment because it will last for decades if given even a little respect and it will retain its value very well.

One of the pains of rehearsal is lugging a 50lb amp around and more than a few band members have had to contend with back problems as a result. This is a pick up and run amp that has the balls to handle a drummer at rehearsal, unless he’s pounding like John Bonham.

There isn’t much negative feedback about the Pro Junior out there, but one gripe that crops up quite a bit is the electrical hum or buzz, audible even without a guitar plugged in. Another complaint that you hear from time to time is a sound similar to shards of glass clinking together while playing. Here are a list of possible causes and remedies:

The Pro Junior isn’t for everyone: some guitar players want modeling or at least built-in reverb, some want a 12” speaker for fatter bass, and others want the dreamed of stack. But if you are into pure tube tone that screams back at you from a little grab and go box for as little as US$400 new, check out the Fender Pro Junior.

Here are some other music related articles you might want to check out:

Tubes with Tube Dampers from eBay

What Guitar Amp Maker Do You Prefer?

Who is you favorite amp maker?