The Hits of 70s Glam Rock Group: The Sweet

Glam Rock band, The Sweet (or Sweet, as the band later became known), was one of the premier groups from the Glam era of Seventies British commercial pop/rock music.

This page follows the band's progress from bubblegum band in the early Seventies, through their heyday as Glam Rock kings, to their later years as hard rock gurus, with the use of videos showcasing all of their hit singles during this period.

Reminiscing About The Sweet

It was 1971 and the music scene in the UK was about to change. For the most part, record buyers were growing tired of the progressive rock sound and were looking for something lighter, melodic and fun.

The public in Great Britain were soon to embrace a new sound that was to explode on to the nation's radios and concert halls: Glam Rock - and I was among them.

One of the most successful Glam Rock bands of the day was The Sweet - comprising Brian Connolly (lead vocals), Mick Tucker (drums), Steve Priest (bass) and Andy Scott (lead guitar). I loved them!

I remember waiting in anticipation for the next new song, so that I could rush out and buy it. Top of the Pops was the big popular music TV show of the day and I made a date each Thursday evening to watch it in order to make sure I didn't miss their performances.

Creating this page reminded me of the excitement of those teenage years, when your priorities had nothing to do with real life...and, indeed, life was Sweet.

All That Glitters: TV Cameras Follow The Sweet During Their Heyday

This was The Sweet's first UK hit single reaching Number 13 on the charts in March/April. It was also one of the first songs ever composed by Nicky Chinn and Michael Chapman, who would go on to compose many of the band's hits.

It was only in later years that it was acknowledged that vocalist Brian Connolly alone appears on this performance, while guitarist Andy Scott was not even a member of the group when Funny Funny was recorded.

The Sweet's second UK smash was Co-Co, a song encompassing the calypso sounds of the Caribbean, complete with steel drums and a breezy arrangement ideal for imagining palm trees and sunny beaches.

It is simplicity itself and the band members later confessed that it had little to do with their own musical tastes. As with the previous recording, they didn't have to play on the record, as vocalist Brian Connolly alone was present at the session, while producer Phil Wainman can be heard on drums.

A monster hit worldwide, Co-Co gave Sweet their first ever American chart entry, while it reached Number 2 in the UK.

Alexander Graham Bell was a departure from The Sweet's recognised sound.

Instead of the overtly bubblegum/glam style, the Chinn/Chapman writing team wrote this highly melodic ode to the inventor of the telephone, only to see it briefly scrape into the lower reaches of the UK Top 40.

Poppa Joe returned The Sweet to the upper echelons of the UK Top 20 with a sound similar to the previous release Co-Co.

Really, it is a far more accomplished composition than that bubblegum predecessor - one of the first to illustrate writers Nicky Chinn and Mike Chapman's progression from pure pop constructions to more adventurous arrangements.

Poppa Joe is revealed as a fascinating creation, building in pitch and tempo as it progresses. It topped the chart in eight different countries and reached Number 11 in the UK.

Its wild, singalong chorus is as infectious as any of the band's earlier releases, but with an arrangement that is moving closer and closer to The Sweet's own sound. Although the group was once again not required to play on the record, this would be the last time that happened.

The Sweet hated the song. Nicky Chinn recalled: "I became aware of that when we were told (by The Sweet) that Little Willy was a piece of rubbish and had no right to be released. It wasn't exactly a symphony, of course, but...it was a hit, and we told them it was going to be released whatever they thought of it."

The Sweet's sixth straight British hit was also the first on which the entire band was permitted to perform and the group's own confidence and abilities shine through from the outset; a meaty guitar riff, the pounding drums and the layered chorale vocals. Another enduring Sweet tradition, a camp one-liner from bassist Steve Priest, also made its debut here: try a little touch, try a little too much....

Wig-Wam Bam reached Number Four in the UK in September 1972, establishing The Sweet at the forefront of the glam rock movement. 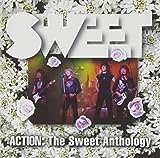 This is a collection of the finest work recorded by Sweet during the 70s. From little known tunes to their monster hits, this CD is absolutely filled with the best recorded material of Sweet. Catchy tunes (Poppa Joe), Glam classics (Ballroom Blitz) and Heavy Rock (Action). It's all here. The best compendium of Sweet hits I have seen. A MUST for any fan. Many of these songs have been hard to find on CD before.

The Sweet had been writing their own B-sides and album tracks, many of which were of a more rock heavy sound than the group had been recording on their A-sides. Consequently, Chinn and Chapman decided to write more rock influenced songs for the band.

Block Buster! was the result of Chinn and Chapman's harder glam rock approach and became the biggest hit Sweet ever had in the UK. It reached Number One on the charts in early 1973, eventually going platinum.

The Chinn/Chapman composition Hell Raiser was issued in May 1973 and was to become The Sweet's most dramatic single yet: a pyrotechnic rocker which opens with a hellish scream, rides a flame thrower guitar and explodes with volcanic riffs and rumbling drums.

In later years, Sweet would make a concerted effort to "go heavy" and lost a lot of their following as a consequence.

In fact, Hell Raiser was already a neo-metallic raver in its own right, but still managed to reach Number Two on the UK chart.

Ballroom Blitz was released as a single in 1973, when it reached Number One in Australia and entered at Number Two in the UK singles chart.

The song peaked at Number Five in the States and was one of that country's biggest hits of 1975.

Ballroom Blitz appeared on the US version of The Sweet's 1976 album Desolation Boulevard and remains one of the band's best known songs, having been covered subsequently by a variety of artists.

The Sweet's first single of 1974, Teenage Rampage was the latest stage in the band's bid for full rock respectability: a raucous call to arms bearing a guitar attack that owes as much to Alice Cooper as it did to the band's own musical tastes.

The crowd roar running through verses and chorus alike, meanwhile, gives the impression of it having been recorded at an even rowdier concert. Once again, this latest single stalled at Number 2 in the UK charts.

The Sweet: The Six Teens

A savage slice of cynical nostalgia, The Six Teens traces the fates of Bobby and Billy, kids growing up immersed in the revolutionary rhetoric of the late 1960s, as they come to terms with the fact that the revolution they fought for was simply another mass-marketed gimmick.

Heady stuff for a simple pop song, although by this time The Sweet had moved so far from their own bubblegum beginnings that the only real shock was that Chinn and Chapman wrote this.

It could have been a Deep Purple B-side. Or Queen, for that matter. That band borrowed an awful lot from Sweet in the vocal department and it is one of rock history's saddest ironies that, when Sweet themselves tried to reclaim their harmonies during The Six Teens, the UK media promptly condemned them for copying Freddie Mercury and co.

While The Sweet's claim to fame surrounded their Glam Rock hits, in later years the group started to record tracks which brandished its true identity.

For years, the B-sides of the band's hit singles displayed its true direction, and once the tie with songwriters Chinn and Chapman was severed, Sweet began to record the music it wanted to be heard.

Much of this styling was included on their early albums, Sweet Fanny Adams and Desolation Boulevard, both of which are held in high regard by both fans and rock critics.

Turn It Down received minimal airplay on UK radio and was banned by some radio stations because of certain lyrical content - "God-awful sound" and "For God's sakes, turn it down" - which were deemed 'unsuitable for family listening'.

As a consequence, this hard rocker of a song only managed a lowly chart placing of Number 41 on the UK chart.

Released only in Australia as a single, Sweet's cover of Peppermint Twist went all the way to Number 2 on that country's chart.

Fox on the Run

Fox on the Run was yet another Sweet Top Ten hit and taken from the album Desolation Boulevard, the band's most successful LP release. The song reached the Number 5 spot in the US and Number 2 in the UK.

Desolation Boulevard marked a noticeable transition within the band, as they were attempting to adopt a slightly harder rock format. The band wrote Fox on the Run, initiating a blatant bid to shed themselves of Nicky Chinn and Mike Chapman's bubblegum songwriting recipe which had been a staple of Sweet since the early 1970s.

Even though Fox on the Run combined a heavy guitar crunch with Brian Connolly's high-pitched, but rock groovy vocals, it still harboured a slight glam rock sound in its flashiness. It may not be of the hardest calibre, but it proved that Sweet was headed towards a more serious sound.

Sweet's second entirely self-composed hit, Action, was released in the UK in July 1975 and reached Number 15. Six months later, it made Number 18 in America.

The Lies in Your Eyes

The Lies in Your Eyes was one of Sweet's least successful releases in the UK (Number 35), but became more popular in Australia and parts of mainland Europe.

It was a great track, but it would be two years before the band made a reappearance in the UK Singles Chart, as songs such as 4th of July, Lost Angels, Fever of Love and Stairway to the Stars failed to sell.

Sweet bounced back into the charts in 1978 with Love Is Like Oxygen, but the single proved to be the group's last gasp.

Sweet never reached the Top Ten again, neither in the US nor the UK.

Are You A Fan of The Sweet?