My Obsession with Chef Gordon Ramsay and Hell's Kitchen

A true lover and fan of GOOD television shows. The shows that have you excited to see the new season start.

My Obsession with Chef Gordon Ramsay

My Obsession with Chef Gordon Ramsay and Hell's Kitchen runs deep. I've watched every episode from day one. Though harsh at times the show is one of my absolute favorites.

I know exactly how it all began, the first episode of Hell's Kitchen in May of 2005.

Yes that was the the beginning of a TV show love affair that will last a lifetime. Chef Gordon Ramsay, the boss from hell who can make or break you. I can't think of anything that would make me stop watching Chef Ramsay on television. He's like a drill sergeant whipping his troops into shape. His success in the food industry is known world-wide along with his sometimes tyrant behavior. There is nothing wrong with wanting things to be almost perfect, especially in a kitchen. We all know he has a gentle side that we get to see on Master Chef Junior, but it's the jaw-dropping rages he goes into over the quality of his food that keeps us entertained. I've seen him at his best and at his worst and I eagerly await the next episode of Hell's Kitchen. 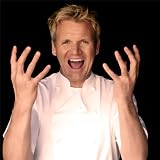 He is a black-belt

His autobiography is called "Humble Pie".

Chef Gordon Ramsay was born on November 8, 1966 in Glasgow, Scotland. His family moved to England when he was just five years old. He was a very talented soccer player growing up. at 15 he played for the Glasgow Rangers a pro club team for three years. Unfortunately he injured his knee forcing him to take another career path. He went to college and graduated with a degree in Hotel Management from North Oxfordshire Technical College.

Chef Ramsay started working for some of the top chefs in Europe soon after. In 1993 he became head chef at Aubergine in London earning it two Michelin stars. In 1998 he opened his very first restaurant, Restaurant Gordon Ramsay. This restaurant received a 3 star Michelin rating. He wrote his first book soon after called, Passion for Flavour. In 2000 Gordon Ramsay was named Chef of the year at the prestigious Catey Awards. In 2006 he was named Officer of the Order of the British Empire which was awarded to him by Queen Elizabeth ll. He has done so much and achieved so much it's not possible for me to list it all.

This was just the beginning for Chef Ramsay. He started opening more restaurants and writing more books. He starred in a number of UK shows. His first TV show was a documentary which followed new chefs called Boiling Point. It was a success so they created a reality TV show with the same name. The show did great so they decided to bring it to the United States. Hell's Kitchen aired in 2005 and was a huge success. Chef Ramsay continued to open up more restaurants and pick up more reality TV cooking shows. Chef Ramsay's hit shows in the U.S. are Hell's Kitchen, Masterchef, Masterchef Junior, Hotel Hell and Kitchen Nightmares. One only wonders how he can keep up with it all.

His TV shows are successes, his restaurants hold Michelin stars and his books become best sellers. All of this and still human enough to dish out a good tongue lashing when need be. Oh how I love this man. My Obsession with Chef Gordon Ramsay runs deep.

The Winners of Hell's Kitchen

If you've never watched this show you have missed some great reality TV. Some people can't take the heat of even watching it because it can be a bit intense. Let me tell you just how much heat I'm talking about. Chef Ramsey yelling and slamming plates down. His hot head and sharp tongue demands the contestants prove themselves to be worthy to win. He scares the living daylights out of them each season. No one is safe, not even the really good chefs.

The show is a cooking competition with about 18 contestants. The jest of it is to complete a dinner service each night without having any plates come back or people leaving because of the long wait. Well there's actually a lot more to it than that, but you'll have to watch and see for yourself.

The contestants are split into two teams. The team that wins the dinner service is safe and the other team has to pick two contestants to go up for elimination. Every week a contestant is eliminated because of poor execution and or lack of teamwork or whatever reason Chef Ramsay sees fit. And let's not forget, you really do need to know how to cook.

Maybe the first seasons contestants didn't know what they were signing up for, but after that they all knew. The show is filled with drama, Chef Ramsay's and the contestants. Some of the contestants are so dramatic they forget how to cook. We've seen them shout and fly off the handle just as much as Chef Ramsay does. The only difference is they usual do it amongst each other. It's reality TV so expect a little chaos at times.

The competition is not for the faint of heart. Hopefully the emotional scares from being on the show heal fast. If you're strong enough you'll survive Chef Ramsay's wrath and become a better chef. Every now and then a contestant will quit and ask to leave Hell's Kitchen. The quitters always upset me because they took a spot someone else could have had. The winner of Hell's kitchen receives a prize of $250,000 dollars and a one year contract to be head chef at one of Chef Ramsay's restaurants.

Gordon Ramsay once owned a restaurant

A term he has used in Hell's Kitchen a few times.

All true foodies know what I mean when I say the food looks so good you can smell it through the TV screen. The proteins they use on the show are the best. The steaks look so good you could eat them raw. And sometimes that's exactly what happens. You would think chicken would be fairly easy to cook, but yet it's what most of the contestants have a hard time with. They also have a hard time getting the fish just right. Oh and let's not forget how bad they do when it's time to make pizza.

They use only the finest ingredients, the freshest vegetables and the finest cuts of meat. Home cooks like myself learn all sorts of different cooking techniques from Chef Ramsay and from some of the very talented contestants. You can learn a great deal about food and flavors from watching the show. I never knew what a risotto was before watching Hell's Kitchen, but now I cook it myself at home. I've also become very fond of beef wellington although I do not make it myself. Scallops are a big favorite of mine. I cringe every time a batch of them are thrown into the trash on the show. Yes they're a little overcooked, but they still look scrumptious! That's how you become hooked. Who can resist a trash talking man and a delicious menu.

What Chef Gordon Ramsay cooking show is your favorite?

Some of Gordon Ramsay's Restaurants, U.S.