Documentary of a Typeface and Font

Movie: Documentary film by Gary Hustwit. Released in the US on September 12, 2007. A feature film about typography, graphic design, and global visual culture all held together by the typeface Helvetica and featuring interviews with some of the greatest names in design.

Typeface: Created by Max Miedinger and Eduard Hoffmann at the Hass foundry in Switzerland in 1957. Became the face of Modernism and the modern corporation and is perhaps the most ubiquitous typeface today. Currently owned by Linotype.

The life of a designer is a life of fight, fight against ugliness. Just like a doctor fights against disease.

Helvetica
Typography is everywhere, and one of the most prevalent typefaces today is Helvetica. This movie introduces the viewer to graphic design and the global visual culture that surrounds us on a daily basis, but one that perhaps we never notice. Director Gary Hustwit leads us through the birth of the typeface in Switzerland and through interviews with graphic designers and typographers, shows us the dramatic rise of Helvetica as the front face of Modernism. However, in the 50 years since its birth, a split in the design world has developed. The overuse of the font led the Post-Modernists to reject the rigidity of Helvetica and criticize its uniformity and association with government, bureaucracy, capitalism, and war. Even still, for many designers today, the font has been heralded as "perfect" and "the ultimate typeface." "Helvetica" is an attentively and elegantly filmed documentary whose candid interviews with designers tell not just the story of the typeface, but also the story of the industry and the cultural shift occuring right now with the rise of technology. By the end of the film, you'll start searching for instances of Helvetica everywhere in your daily life, and you'll start to wonder how typefaces influence your opinion of familiar brands or mundane street signs or even the people around you. This is a brilliant and must-see film. Also available in Blu-Ray. Movie still from Helvetica's official site.
Buy Now

Get the Movie - Watch the movie! 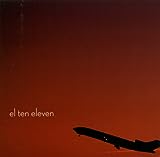 El Ten Eleven
Primary music featured in the movie. Debut album that helped inspire director Gary Hustwit to see the type around him and film the documentary.
Buy Now

Fan of Helvetica Movie? - Cast your vote for the movie Helvetica

History of the Typeface

Helvetica is the name of a widely used sans-serif typeface developed in 1957 by Swiss typeface designer Max Miedinger.

Helvetica was created by Max Miedinger with Eduard Hoffmann at the Haas'sche Schriftgiesserei (Haas type foundry) of MÃ¼nchenstein, Switzerland. Haas set out to design a new sans-serif typeface that could compete with Akzidenz-Grotesk in the Swiss market. Originally called Neue Haas Grotesk, it was created based on Schelter-Grotesk.

In 1960, the typeface's name was changed by Haas' German parent company Stempel to Helvetica - derived from Confoederatio Helvetica, the Latin name for Switzerland - in order to make it more marketable internationally.

Get the Book - Read the book!

Helvetica: Homage to a Typeface
Filled with pages of color images of Helvetica in use, from album covers and road signs to advertisements and product packaging. The result is an exciting collection of this icon of modern design.
Buy Now

It's just this beautiful, timeless thing, and certain things shouldn't be messed with, you know?

Massimo Vignelli (born 1931) is a designer who has done work in a number of areas ranging from package design to furniture design to public signage to showroom design through Vignelli Associates, which he co-founded with his wife Lella. He has said, "If you can design one thing, you can design everything," and this is reflected in his broad range of work.

Vignelli works firmly within the Modernist tradition, and focuses on simplicity through the use of basic geometric forms in all of his work.

Vignelli From A to Z
Beginning with the intriguing 'A for Ambiguity', it continues through the alphabet, describing Vignelli's approach to subjects as diverse as book design, discipline, furniture, garment design, interior design and lighting, newspapers, packaging and typography.
Buy Now

Men's Vogue recently asked Vignelli to update his classic 1972 New York Subway Map. All 500 limited edition copies of the new map were sold out on May 1, 2008. See the updated map.

David Carson is an American graphic designer. He is best known for his innovative magazine design, and use of experimental typography. He was the art director for the magazine Ray Gun. Carson was perhaps the most influential graphic designer of the nineties. In particular, his widely-imitated aesthetic defined the so-called "grunge" era.

Carson became interested in a new school of typography and photography-based graphic design and is largely responsible for popularizing the style; he inspired many young designers of the 1990's. His work does not follow "traditional" graphic design standards. Carson is emotionally attached to his creations. Carson's work is considered explorative of thoughts and ideas that become "lost" in the subconscious. Every piece is saturated, but Carson still manages to communicate both the idea and the feeling behind his design. His extensive use of combinations of typographic elements and photography led many designers to completely change their work methods and graphic designers from all around the world base their style on the new "standards" that have distinguished Carson's work.

Trek
The latest volume featuring the graphic work of David Carson is full to bursting—nearly 500 pages’ worth—of the color, splashy text and eye-catching design for which he’s been termed "the most famous graphic designer in the world."
Buy Now

Stefan Sagmeister (born 1962 in Bregenz, Austria) is a graphic designer and typographer currently based in New York City. He has his own design firm, Sagmeister Inc. He has designed album covers for Lou Reed, the Rolling Stones, David Byrne, Aerosmith and Pat Metheny.

Solo shows on Sagmeister Inc's work have been mounted in Zurich, Vienna, New York, Berlin, Tokyo, Osaka, Prague, Cologne, and Seoul. He teaches in the graduate department of the School of Visual Art in New York and has been appointed as the Frank Stanton Chair at the Cooper Union School of Art, New York.

Videos of Helvetica - Shorts and excerpts

Why do some people find it so strange that a typeface should be used for over 50 years? When something is constructed as well as Helvetica, it should last for a couple of hundred years, just like great architecture.

Drop an opinion here and let the world know! If you're a fontophile/typophile, typographer, graphic designer, or movie geek, we want to hear from you. Thanks in advance.