I Blame Coco - The Beautiful and Talented Coco Sumner

I Blame Coco is the name of the band headed by Coco Sumner - the beautiful and talented daughter of rock legend Sting and his wife, filmmaker Trudie Styler. If you haven't heard of Coco Sumner yet, don't worry - you surely will soon! Although only 21 years old, she has already released an album, "Constant," and made a name for herself after touring and performing for years. Her style and sound - a mixture of androgynous, husky vocals, electro-pop with ska flourishes, and mature lyrics set her far apart from the typical young female pop-star scene.

If you don't know about Coco Sumner and her band, I Blame Coco, read on! Here you will find music videos to sample, links to find out more about her, as well as sources for purchasing her music and albums.

Are You Familiar with Coco Sumner?

Do you know the music of "I Blame Coco"?

Haven't heard Coco's music before? Then check out these great tracks on YouTube. Enjoy her unique vocals and catchy techno/electronic sound, a true breath of fresh air in today's dance-pop/indie-rock scene.

On The Artist and Her Band, I Blame Coco

She was born Eliot Paulina Sumner on July 30 1990 in Pisa, Italy - but she is now more commonly known as "Coco". She started playing music at a very early age, already writing her own songs and material by the time she was 15. Her first songs had a heavy reggae influence and pop-punk sound, which endeared her to many fans of her father Sting's famous band, The Police. In 2007 she independently released the song "I Blame Coco" as a single, and later that year signed with Island Records.

She worked for six months on writing and arranging material for what would become her full-length debut album, The Constant, which was released in 2010. Some were surprised by the change in her music, which now had a strong electropop sound and little of her original reggae/punk leanings. Even so, she found many new fans with this more mainstream musical style, which still maintained its originality thanks to her unique and rich singing voice. She supported popular band La Roux on tour and her band I Blame Coco has performed at numerous music festivals including Glastonbury, Secret Garden Party and Isle of White.

Coco is not the only musically-inclined offspring of Sting; her half-brother Joe Sumner is the lead singer and guitarist for the band Fiction Plane.

Learn more about Coco Sumner and I Blame Coco at Wikipedia.

I Blame Coco: "Constant" - The Debut Album by Coco Sumner

This debut album by Coco is one she has worked on since she was only 15 years old. Her interesting style and sound shine through on these carefully crafted electropop songs, making her an artist to watch out for in the future. 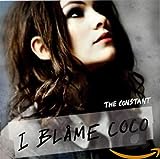 The Constant
The Telegraph said "it’s Coco’s husky, grainy voice – reminiscent of her Dad’s – which really sets her apart from her rivals", however Clash called it "Predictably pristine, ultimately inessential," lamenting the loss of her earlier reggae-influenced sound. Why not check out the album for yourself to decide?
Buy Now

"I Blame Coco" on eBay - Bid Now on CDs and More Today!

Check eBay for great deals on I Blame Coco merchandise!

Got anything to say about Coco Sumner? Please feel free to leave your comments here. Thanks for stopping by!