I Love Phil Collins - His Best Songs and Music

My name is Shay, and I'm a millennial. I've hand-picked 19 Christmas gifts that are sure to please the gals of my generation.

I love his voice, his catchy tunes, and his balding head. This article is all about the music, the mystery, the Phil.

Phil Collins that is!

I will cover some tidbits on the man behind the drums, a mini biography, some trivia, but most importantly, I'll be talkin' bout the music. Read on for clips from some of my all time favorite Phil Collins (and Genesis) songs, as well as some fabulous (and super 80s) music videos.

How much do you know about Phil Collins?

Who Is Phil Collins?

Phil Collins is a singer/songwriter/drummer/awesome person who was most famous in the 80s and 90s. He's British and has a very recognizable singing voice, both as the (second) front man for the band Genesis, and during his solo career. His music can best be described as pop. He had a string of 13 top ten hits in the heyday of his career.

Throughout his career has also been balding. While it may be a sensitive subject for some men, for Mr. Collins it doesn't seem to be the case. I'm grateful that he took the the higher "Bruce Willis" road rather than the lower "John Travolta" route with hairstyle choices.

Phil, bald looks fabulous on you.

This is probably my favorite Phil Collins song (from his solo career). It still gives me the chills.

Factoids via PhilCollins.com and Wikipedia.

Robert Downey Jr, aka IRONMAN has been quoted as saying: 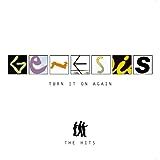 Man On the Corner

Throwing It All Away 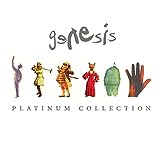 Platinum Collection
If you're also a fan of the older, Prog Rock era of Genesis, the 3-disc big momma "Platinum" covers the Peter Gabriel through the Phil Collins era of Genesis, and is thought to be the best complete compilation of the band's music.
Buy Now

The wonkiest puppet video ever. They don't make 'em like this anymore.

Is it as bad as everyone says it is?

Phil's Collin's voice is a gentle, calming, effortless ocean that I like to wrap myself in. Much of his earlier work with Genesis sounds similar to Peter Gabriel, and there's a whole camp of people that believe Collins's voice is better (gasp!) than Gabriel's; many people believe that he has more range with his vocals. Collins has also proven to be the more successful pop artist. With over 150 million records sold, he is thought to be the most popular pop musician of the 80s after Michael Jackson. Even those that don't agree that he is the better musician than Gabriel will agree that Phil Collins was one hell of a drummer.

At the peak of his fame, the Collin's sound is pure, unadulterated pop. While some of his songs fell into the bland, unoriginal category, I'd argue that most were catchy, memorable and have held up over time. Many of his lyrics stem from a darker place than his upbeat melodies and videos might suggest. His multiple failed marriages certainly fueled a large portion of Phil Collins's work.

In a 2010 interview with Rolling Stone, Collins reveals that much of the backlash he received in the 90s took him by surprise. At the same time he accepts that he is often pegged as the punchline to the excess and ridiculousness of the 80s. Such is his lot in life.

Personally, I think Phil Collins is fantastic. I grew up with his music and it makes me happy. There is a certain joyous quality to his songs. It's why I wrote this article and why Phil Collins will remain one of my favorite elements of pop culture today.

Not everything needs to be high art to be worthy and it's certainly okay to like or even love something that is popular.

Another Day In Paradise

In the Air Tonight

The music video from "Don't Lose My Number" inserts Phil into some iconic movies and music videos from the era. Parodies and references include: classic westerns & samurai films, Mad Max 2, David Lee Roth (California Girls), Elton John (I'm Still Standing), The Police (Every Breath You Take), and The Cars (You Might Think).