Lionsgate Home Entertainment celebrated the twenty-two year anniversary of the film Ironweed by releasing it to DVD for the first time (coincidentally the main character returns home after twenty-two years). Ironweed was based on the Pulitzer Prize winning novel, of the same name, written by William Kennedy who also wrote the screenplay.

The film stars two heavy hitters in the film world, Jack Nicholson (Francis Phelan) and Meryl Streep (Helen Archer). Both Jack and Meryl were nominated for Academy Awards for their performances in Ironweed.

Ironweed takes places in Albany, NY in 1938. Francis is a homeless man who has just returned to town after riding the rails on and off. The first thing he learns is one of his bummer friends, Rudy (Tom Waits--who always leaves an impression) has cancer and that his on again off again partner Helen is also in town. Helen shows up later at the church soup kitchen. Francis and Helen are obviously a couple, the fighting kind. But there is a unique chemistry instantly between them. The trio commiserate by drinking together, something they do more often than they should.

A History with Booze, Ratty clothes and Body Odor

While waiting to take on a day job, Francis visits the grave of his son Gerard who died when he was a baby after being dropped by a drunk Francis. Almost immediately Francis begins to have a combination of flashback and delusions of people who have been hurt by him. Like to 1901 when he hit a trolley driver, who was driving a load of scabs, in the head with a rock and killed him. Nathan Lane plays the short role of the trolley driver who he begins to see everywhere. It's hard to know if these delusions are new or something he's always suffered from

In his heyday Francis was a successful ball player. When his son died he left his wife and two other children (Billy and Peg) behind to fend for themselves. In her heyday, Helen was a popular singer although we never learn the moment that changed her life. Personally, I was enamoured with Meryl Streep in this movie even though Nicholson's character is more of the focal point. I felt there wasn't enough time spent on her. Rotten teeth and all she still exudes a certain kind of curious beauty that inspires interest.

Ironweed is a character study of two "bummers". You have to be a fan of Meryl and Jack or the author to want to see this film. The movie is very slow but in the end the thin plot is successful in showing that there is more to a man than the clothes on his back and where he hangs his hat. Francis and Helen come with a history that is painted with more than booze, ratty clothes and body odor. Both characters had success, failure and love in their lives. Ironweed is a good reminder of another kind of human condition; one that is often ignored.

Ironweed is available from Amazon.com.

Ironweed is available from Amazon.ca. 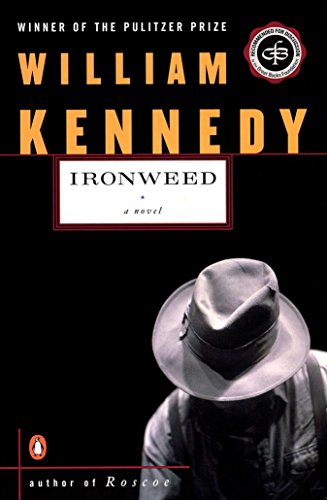 Ironweed: A Novel
Ironweed was based on a Pulitzer Prize winning novel written by William Kennedy who also wrote the screenplay.
Buy Now