The Ultimate Music-Themed Vacation - Rockin' On In Jamaica!

The Jamaica Rock 'n' Blues Jam staged it's first annual event in September 2001. Held at Hedonism II resort in Jamaica, the Blues Jam incorporated an all-inclusive vacation with rock and blues music. But it wasn't just bands performing for the resort guests. Instead, everyone at the resort became a part of the event!

From the amateur performers to the professional musicians; from the resort kitchen staff to the piano player, and all the people in between, the Jamaica Rock 'n' Blues Jam was open to everyone at the resort. A jammer didn't have to be a professional. All he or she needed was a passion for rock 'n' blues music, and a dream of performing onstage.

The Jamaica Rock 'n' Blues Jam ran from 2001-2009 and attracted musicians and artists from all over the world, and here is the reasons why:

Are you a jammer?

Have you ever participated in a jam at a club or resort?

What Is A Jam?

A Jam is a unique session of live entertainment by a group of musicians and singers. It can be held in a club, at someone's home, at a vacation resort, or even on a cruise ship! Normally, a band will start the session, and play several tunes. Thereafter, they will invite others onstage to perform for the audience. The music is unrehearsed, but is usually known by all of the participants.

Back in the late 1990s, I was attending jam sessions at many of the blues clubs around the Dallas / Fort Worth area. I was already a great fan of the Hedonism resorts, and thought it would be great if we could incorporate jams along with a Jamaica vacation. I got in contact with Joseph Smith, then the General Manager at Hedonism II, presented the idea, and he agreed to let me bring bands to the resort to entertain the guests.

In Sept 2001, just 5 days after the terrorist attacks on the United States, we headed to Hedonism II. While there weren't many guests at the resort, those who came to hear the music loved the idea, and we made plans to return each year. 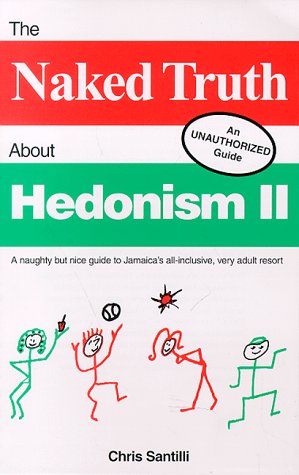 The Naked Truth About Hedonism II
Chris Santelli has visited Hedonism II so many times that she's become a legend! She provides the ins and outs; the good and the bad. A must read if you're headed to Hedo!
Buy Now

In 2002, the Jamaica Rock 'n' Blues Jam moved to Hedonism III. The group grew substantially, with musicians from across the United States in attendance. Ed Lively, of "The Movers", was a special guest artist. Eric, a guest known as the "Hedo Bluesman", wrote & performed a song called "The Hedonism Blues". Denton, the drummer from Hedonism 2 and Bobby, the Hedo 3 bass player, joined the musicians for onstage jams. Caribbean Travel & Life and Air Jamaica's inflight magazine advertised the Jamaica Rock 'n' Blues Jam. The word was out!

From there, the website was redesigned, the logo updated, and lanyards and t-shirts were provided to the group. Submissions poured in from around the globe, from artists wanting to participate in the Jam. Since the event was open to everyone, not only were the best invited, but all were encouraged to attend!

Remote Broadcast From Jamaica to California

In 2003, even more musicians attended. A radio station, KPFX from California, heard about the Jamaica Rock 'n' Blues Jam, and decided to do a remote broadcast of the Jam from Hedo 3. Halfway through the week, the Jamaica Waterslide Team arrived, so there were even more musicians at the resort! The bands performed at the nude pool, at the disco, in the main dining room, and even the piano bar. Even on top of the waterfall during the Friday gala dinner. It was truly an amazing time, and we couldn't imagine it getting any better than this!

Hurricane Ivan was the highlight of 2004. There's no way to describe how excited - and how scared - everyone was during this storm. The most incredible day long jam occurred in the piano bar the day after the hurricane.

The legendary multi-Grammy award winner Tommy Allsup (Bob Wills & the Texas Playboys) was the special guest in 2005, along with his son, Austin Allsup. Tommy was a hit with all the ladies, and Austin definitely strutted his stuff with the younger crowd. Fans from previous years made an incredible showing, along with musicians from across the country.

The group grew larger and so did the fun. In 2006, the usual musicians participated along with some new ones. The Jamaica Waterslide Team joined in half way through the week, making the group grow. Jeff - one of the host musicians - won the "Hedo Hunk" contest, while the rest egged him on. The bands performed each day in the dining room, leaving evenings a time to enjoy the nude pool, piano bar and disco. You don't get this every day.

By 2009, all the best musicians were in attendance, including Blind Dog Cooley on guitar, Bob Luke on drums, Scott Morris on keyboards, the infamous Aram Doroff on bass, Marko on guitar,and Brian on harmonica. A few jammers joined in, and all were invited to play with the resort's Reggae Band. A truly excellent time!

The Jamaica Rock 'n' Blues Jam is currently in the history books as one of the most amazing and fun events held at the Hedonism resorts. We enjoyed some talented musicians, slid down a three-story water slide, went snorkeling & sailing, and lived through a hurricane. A vacation doesn't get any better than this!

We may have put the Jam on hold for awhile, but it's still fun to go to Hedonism II any time of the year. If you haven't tried it, perhaps it's time you did!

Like our logos? Visit our Jamaica Rock 'n' Blues Jam Cafepress store to get your own!

Choose from the colorful "Ultimate Music-Themed Vacation" logo, or purchase stationary with the "Legs" photo. It's up to you, and you can't go wrong with either!

Have you ever stayed at Hedonism II? Have you ever participated in a blues jam? Please leave your comments below