If You Love Johnny Depp, You Are Going To Love Him On All These Magazine Covers

On June 9, 1963, Johnny Depp II was born as John Christopher Depp. Hes been in movies too numerous to mention since his first television program, 21 Jump Street, in 1987. In the last five years he has appeared in The Rum Diaries, The Tourist, The Lone Ranger and Dark Shadows.

If you don't know who Johnny Depp is, then you are on the wrong page but odds are pretty good you are here because you are searching for some of the best Johnny Depp pics in town.

Personally, I think that some of the artwork gracing the covers of magazines featuring Mr. Depp is amazing and that is what I am going to share with you here today.

You will not find a lot of information ABOUT Johnny Depp because I assume if you're here, well, you know it all already.

You will not find a lot of information ABOUT his movies. You can probably rattle them off the top of your head anyway. If you are interested in reading a bit more about his movies, you might enjoy visiting my page about the five best Johnny Depp movies.

WHAT WILL YOU FIND ON THIS PAGE?

You will find a few of MY favourite Johnny Depp magazine covers, including but not limited to his appearances on the cover of GQ, Vanity Fair and Rolling Stone. A bonus? You can still buy all of these magazines, read the articles to learn more about this talented and versatile actor AND then add these Johnny Depp pics to your collection.

Johnny Depp On The Covers of GQ Magazine

Johnny Depp On The Cover of GQ

No one could argue with that tagline, he's Definitely HOT on this cover. He is a much younger Johnny, on the cover of GQ from October 1993. He's been a heartthrob for a very long time though I was blissfully unaware with him at that time.

Why JOHNNY DEPP Left Hollywood (And Moved To France)

In this slightly more recent but still not recent issue, from August 2003, he discusses the obvious.

Starring Johnny Depp (and others.) In this fairly recent issue of GQ magazine, Johnny was voted one of the most stylish men in the year in the year 2010. He was keeping company with the likes of Brad Pitt, Daniel Day Lewis, LeBron James, Clint Eastwood, Jay-Z and Robert Pattinson.

Click here to order your copy of GQ magazine with Johnny Depp on the cover from Amazon.

Which GQ magazine cover of Johnny Depp is the best?

Johnny Depp On The Covers of Rolling Stone Magazine

Johnny Depp On The Cover of Rolling Stone Magazine

Johnny has appeared on the cover of Rolling Stone magazine over and over again. Stories have included but are certainly not limited to the following:

Click here to order Johnny Depp on the cover of Rolling Stone magazine from Amazon.

Which Johnny Depp Rolling Stone magazine cover is the best?

Johnny Depp On The Cover of Esquire

The Meaning of Life

The Meaning of Life: A Decade of Wisdom and Damn Good Advice From The Likes of Johnny Depp. In this issue of Esquire from January 2008, Johnny and Tim Burton are interviewed.

Johnny Depp On The Cover of Vanity Fair 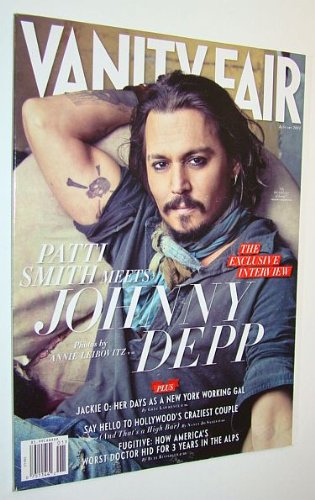 Santa Claus delivered Johnny Depp in my Christmas stocking this year. THIS Johnny Depp. That is, the one with the story, Patti Smith Meets Johnny, from January 2011.

A friend said, "Someone was paying attention." That would be my wonderfully marvelous husband, Chris who tolerates, with a smile, my chatter about Johnny Depp and his movies. I think even my teenage sons are aware that a Johnny Depp movie is a movie that Mom will want to see.

Will you take Johnny Depp

Johnny Depp on the Cover of Entertainment Weekly

With Angelina Jolie On Their Romantic Thriller, The Tourist

I saved one of the best, in my humble opinion, for last and I've left it BIG. (Hopefully, not TOO BIG for your computer screen.) This final picture features Johnny Depp on the cover of Entertainment magazine along with Angelina Jolie for their romantic 2010 thriller, The Tourist. I think this is one of the most amazing Johnny Depp covers EVER. Unfortunately, this Johnny Depp pic also features Angelina Jolie. I think it is an excellent picture of her, too but I would just rather have had HIM to my, ah, ourselves.

You Can Buy Johnny Depp Magazines on eBay, Too

There's an endless list of magazines featuring Johnny Depp, more than I could possibly feature here. The following list is of magazines available directly from the seller on eBay. If you see one you like, don't wait because it might not be available tomorrow.

So tell us, are you a BIG Johnny Depp fan?