Lady in the Water Movie Review

Something Extraordinary Surfaces In Lady In The Water

Lady in the Water is a fantasy movie, which was written and directed by M. Night Shyamalan. It was originally intended to be a Disney movie but, because of disagreements between Shyamalan and Disney, the movie was eventually produced by Warner Brothers.

The story is of a maintenance man (played by actor Paul Giamatti) who discovers a woman (played by Bryce Dallas Howard) in his apartment building's pool. Along with his neighbors, he gradually discovers that she is actually a water nymph who needs to get back safely to her own blue world.

Click here to order Lady in the Water from Amazon.

"A classic bedtime story for a new generation."

Lady in the Water Movie Trailer

Lady in the Water Plot Summary

Cleveland Heep is an apartment building superintendent who believes he has rescued a young woman from the pool in his apartment building. However, he eventually finds out that she is really from a story and trying to return to her home in that story. He and the tenants of his building try to protect her from those that do not want her to go back to her story.

Lady in the Water received disastrous reviews in 2006 from the critics. However, Harrison Scott Key of World magazine said, "The plot turns into a puzzle...and it's quite fun to watch. Ultimately, the movie has us asking one of the most important questions an audience can ask: What happens next? And that makes it a good film." And we pretty much agree with that. This movie is not a blockbuster. However, it is entertaining. The cinematography and acting are very well done and it is quite watchable, even if the plot is somewhat lacking. It is in part a scary movie with its frights coming from suspense and unexpected events rather than a lot of blood and gore.

Lady in the Water Blu-ray Movie Reviews By The Experts

Amazon Customer Reviews of Lady in the Water

"Lady in the Water reminds us of the magic that we left behind as we grew out of childhood. It shows us that we all have a place in life, no matter how trivial we think it is. This is a fairy tale for grown ups. In addition to being visually stunning in every way, Lady in the Water has just the right balance of action, horror, drama and comedy, supported by a great cast of actors that bring everything to this story. I am very much moved by this film and it is one of the few that I can watch again and again. If you have just a little fraction left of that innocent, inner child, then you will surely find the magic here as well." ~ Irene

"This was a visually stunning and memorable movie, with hair rising music and some really jumpy special effects...Yes, there are monsters and there are casualties but then there is a sense of purpose, of a mystery coming together brought upon a mysterious creature...It's a fairy tale that leaves one feeling good and light, with hope and understanding of the future. ~ Kasia S.

"This movie has an enchanting storyline with intricate plot twists. The main stars, Paul Giamatti and Bryce Howard, are perfectly cast. The look of the film is unadorned-these are ordinary people pursuing ordinary lives. There is humor and pathos in the lives of these people. Yet, when galvanized by the hope of something out of the ordinary and an opportunity to do good, these 'normal' people gather around and give their all. In essence this film shows the magic of the everday." ~ snowbrocade

Lady in the Water Movie Soundtrack

The Lady in The Water soundtrack, which was composed by James Newton Howard, won an IFMCA Award for Best Film Score. It also won awards for Best Original Score for a Fantasy/Science Fiction/Horror Film and Best Single Cue of 2006 for The Great Eatlon. 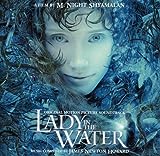 Lady In The Water
AMAZON CUSTOMER REVIEW: "James Newton Howard has now outdone himself again! King Kong was incredible, the Village was outsdanding, Signs was just amazingly good, and all the rest...well, you get the picture. This CD is every bit as good as what I've come to expect from Mr. Howard. It blends the suspense of Signs, the thematic excellence of the Village, and the fantasy elements of something completely original." - Media Lover
Buy Now

Lady in the Water, A Bedtime Story Book By M. Night Shyamalan

M. Night Shyamalan originally wrote this book as a story for his children at bedtime. It features a mystery with twists, magic and a message. Meant to be read alone or to be a complement to the film. The myth from the movie does not appear in the book.

Lady in the Water: A Bedtime Story
Buy Now

Have you seen Lady in the Water?