Walt Disney Pictures released the new version of Tron, called Tron Legacy, on December 17, 2010. It is a sequel to the 1982 film, Tron, which featured Jeff Bridges and Bruce Boxleitner both of whom returned for the sequel. Joining them were Garrett Hedlund, Olivia Wilde and Michael Sheen. Fans of the original movie and video games from the 1980s awaited Tron: Legacy with bated breath. Would the new movie live up to their expectations?

This page is about the NEW Tron movie, Tron Legacy, and I can personally say that it is a good ride. It was my 19-year old son's birthday outing and it had no trouble beating out some of the other movie choices of the day. We saw Tron in Imax 3D and figure our son was well aware of who was buying the movie ticket but agree that it was a good choice and a fun movie for all four of us.

On this page, learn more about Tron: Legacy, the 2010 version, watch the trailer, read some professional and non-professional movie reviews and order your copy of Tron: Legacy which was RELEASED ON APRIL 5, 2011.

Click here to order your copy of Disney's Tron Legacy on DVD or blu-ray on Amazon.

Seems that people interested in Tron: Legacy are less interested in the actors and acting and the plot than they are in the 'eye candy' or the special effects. Anyone who loves the latest in gadgetry is likely to love Tron. In this story, Sam Flynn discovers the secret workshop of his long lost father and finds himself in a computerized world run by a computer program named Clu who is his dad's clone. In an effort to find his real father, he must fight in video games.

I notice an interesting divide. Expert or professional reviewers do not give Tron top marks...but average viewers, like you and I, are more likely to say it was fun. The plot definitely isn't deep, but then again it isn't really supposed to be. The effects are amazing. I enjoyed all of the acting and the ride. This is as close as I will ever come to living on the grid.

In my opinion Tron is a lightweight but enjoyable movie, perhaps cooler than it is smart. If you like cool stuff, you'll like the facemasks, outfits, light-cycles. And, as Bret Fetzer of Amazon says, "Let's be honest, it's all about the light-cycles. That's what the audience for Tron wants, and that's what Tron: Legacy delivers."

I enjoy Jeremy Jahns' movie reviews. I find he does a pretty good job of telling what is good and what is bad about a movie, albeit with his overall judgement of whether he liked the movie or not and of course, with his use of foul language so be warned.

What does Jahns say about Tron: Legacy? He says that it is a "cool badass movie with really good use of 3D" and that it is "not as shallow as people say it is." He recommends it for fans of the original Tron movie (now called Tron: Classic), video game fans and any fan of bad ass movies.

See for yourself what Jahns has to say by watching right here:

I found some amazing Amazon customer reviews, and encourage you to check them out for yourself. You will find comments like this is a sequel that doesn't let you down from James A. Zimmer and Justin Scott's that this movie really worked for him. Scott highly praised the "mind blowing FX and CGI, outstanding stunts and choreography, insane soundtrack and music that actually enhances the movie experience...the very touching and human story about the strive for perfection" and also mentioned that, as a fan of the original Tron, this movie made him long for the old days of arcades and simpler times.

If you are considering buying this movie, I highly recommend checking out the Amazon customer reviews, which you can do by clicking right here.

Is the 2010 version of Tron suitable for children?

Tron is rated PG for sequences of sci-fi action violence and brief mild language and The Movie Mom recommends it for children of middle school age. Commonsense Media recommends it for children aged 10 and up. There is violence and death although it is softened somewhat by the fact that players shatter rather than bleed but those scenes could still could be disturbing. Cursing includes words like damn it and stupid and sexuality is present in the form of female characthers wearing second-skin uniforms and stilettos.

Order YOUR Copy of Tron: Legacy

Tron: The Original 1982 Classic - Is available now on DVD and blu-ray disc.

Did you know that Tron: The Original Classic from 1982 is available now on blu-ray and DVD? No longer do people need to pay a high price for a rare VHS videotape. 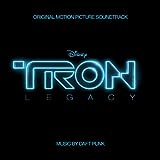 Tron Legacy
AMAZON CUSTOMER REVIEW:"Though I'm not a big fan of the franchise this soundtrack had me pumped up to see this flick and it's a flawless complement to the movie. An excellent piece of work." ~ John Green
Buy Now