Bad Girls is one of the best known hit songs by Donna Summer from the late 1970s.

Sadly on 17th May 2012, Donna Summer passed away at the age of 63 following a long battle with breast and lung cancer.

Donna Summer was born in Boston, Massachusetts and is an American singer-songwriter and musician who came to fame during the disco era. She is best known for her number one dance hit singles in the late 1970s, and was dubbed the Queen of Disco.

Although she is best known for her disco hits, Donna Summer's repertoire has expanded to include contemporary R&B, rock, mainstream pop, and even gospel. She is one of the most successful female recording artists of the 1970s and 1980s, and she still holds the record for having three consecutive double albums hit #1 on the Billboard charts. She was also the first female artist to have four number-one singles in a twelve-month period.

During her early career she sang back-up vocals for groups such as Three Dog Night, and issued her first album, Lady of the Night, which included the European hit The Hostage.

In the summer of 1975, Summer approached music producers Moroder and Bellotte with an idea for a song. She had come up with the lyric Love to love you, baby as the possible title for the song. Moroder was interested in developing the new disco sound that was becoming increasingly popular, and used her lyric to develop the song into a disco track. Donna agreed to record the song as a demo to give to someone else. Moroder was so astounded with her vocals that he insisted she release the single herself. The song, titled Love to Love You, was released in Europe and was a modest success. The song was also her first big hit in America, reaching #2 on the Billboard Hot 100 singles chart in early 1976.

Two Gold albums followed, A Love Trilogy and Four Seasons Of Love, but it was the 1977 album I Remember Yesterday and the song I Feel Love that shot her to worldwide fame.

In 1978 Donna Summer played a role in the film Thank God It's Friday and released the single Last Dance which became her third US million-selling single and her first Grammy win. Last Dance has since become a standard track on talent shows like American Idol and The X Factor.

In 1979 she released the double-album Bad Girls. What made this unusual for a disco album was that it mixed Rock, Funk, Blues and Soul into electronic Disco beats. The album generated three consecutive million-selling singles, Hot Stuff and Bad Girls which both reached #1, and the #2 hit Dim All The Lights. Bad Girls also became her first #1 song on Billboard's R&B singles chart. With her US record sales at an all-time high in 1979, Donna Summer had a run of five US Gold singles (three of which went on to Platinum status) that year alone. Hot Stuff won her a second Grammy for Best Female Rock Vocal Performance.

Donna had continued success with albums such as the 1983 She Works Hard For The Money but her subsequent releases didn't fare as well. Donna Summer released her first album in 17 years, Crayone in 2008.

Why not treat yourself to a Donna Summer CD (or 2, or 3) today and re-live the great days of disco. Amazon have just about every CD you could think of at great prices. 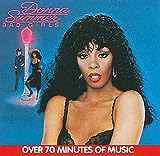 See them out on the street at night, walkin'
Picking up on all kinds of strangers
If the price is right
You can't score if you're pocket's tight
But you want a good time
You ask yourself who they are
Like everybody else
They come from near and far
Bad girls, yeah

Friday night and the strip is hot
Sun's gone down and they're out to trot
Spirit's high and legs look hot
Do you wanna get down
Now don't you ask yourself who they are
Like everybody else, they wanna be a star

Hey, Mister, have you got a dime
Mister, do you want to spent some time
Oh, yeah
I got what you want, you got what I need
I'll be your baby, come and spend it on me
Hey, Mister
I'll spend some time with you

Amazon have a great choice of Greatest Hits CD's from Donna Summer. Why not pick one up today. 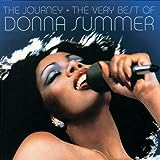 The Journey: The Very Best of Donna Summer
Buy Now

Donna Summer passed away at the age of 63 following a long battle with breast and lung cancer.

Grab yourself a special piece of Donna Summer history from eBay, or even find just a great deal on a CD or DVD.