Cheap Sunglasses is one of the Greatest Hits by ZZ Top, an American hard rock band formed in 1969 in Houston, Texas.

The band holds the distinction of being among the few rock bands still composed of its original recording members for nearly 40 years, and until September 2006, they had the same manager/producer, Bill Ham.

ZZ Top reached peak commercial success in the 1970s and 1980s, scoring many hit songs during that era, but they remain together today and are still touring and releasing albums. ZZ Top was inducted into the Rock and Roll Hall of Fame in 2004.

Nearly as well-known as their music is the group's image: Gibbons and Hill are almost always pictured wearing sunglasses, similar if not matching clothing, and their trademark chest-length beards. Quite comically, in spite of his own surname, Frank Beard almost always has just a moustache. In 1984, the Gillette Company reportedly offered Gibbons and Hill US$10 million apiece to shave their beards for a television commercial but they declined, stating "We're too ugly without 'em".

And go get yourself some cheap sunglasses

I spot a little thing and I followed her all night

But what really knocked me out was her cheap sunglasses

Now go out and get yourself some thick black frames

With the glass so dark thay won't even know your name

What Do You Think Of ZZ Top?

What do you think of ZZ Top?

Gimme All Your Lovin'BUY NOW

Now you can both listen to and watch ZZ Top in your living room. Grab yourself a DVD today. 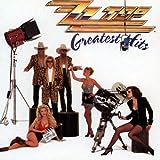 You never know what you might find on eBay. Great prices on CD's and DVD's, plus other rare collectible items. Take a look today and see what's waiting for you.