Maleficent: A New Spin on an Old Classic

Fairy tales are some of the first stories we learn as children. Growing up, I remember watching Snow White, Sleeping Beauty, and Cinderella, among others. The problem with these stories, though, is that they’re very one-sided. There’s generally the good princess and the wicked queen. It’s very black and white, with good versus evil. Over time, some alternate versions of fairy tales have gained popularity. Probably the most common of these is The True Story of the Three Little Pigs, where we see the wolf’s point of view. Maleficent shows us an alternate version of Sleeping Beauty.

In the original version of Sleeping Beauty, Maleficent is shown simply as an evil fairy. She relishes in the destruction and pain her curse on the Princess Aurora will bring to the kingdom. We are never allowed to see her in any other light than the nemesis of the good faeries and the royal family. The 2014 movie Maleficent gives us a much deeper insight into this fascinating character.

What would motivate a faerie, however evil, to curse an innocent infant? The answer: revenge. It’s one of the oldest driving forces in the world.

When we first meet Maleficent, she is anything but evil. Barely more than a child, she is innocent and pure of heart. She uses her powers to help those around her rather than to harm them. When a human boy sneaks into her magical kingdom, her whole world changes. He steals her heart and appears to give her his heart in return. But Stefan is driven by greed and a need for power.

Born a peasant, his life goal is to live in his kingdom’s castle. When the king attempts to siege Maleficent’s kingdom and is struck down by the faerie herself, he swears revenge. He promises his crown to whoever can kill his foe. It has been years since Stefan and Maleficent have seen each other, but she still remembers the day he gave her “true love’s kiss” and she still trusts him. Using this trust, he is able to cut off her wings and present them to the king.

Betrayed by her former lover, Maleficent is overtaken by anger and swears revenge. They say that Hell hath no fury like a woman scorned and this is certainly true for the formerly pure faerie. She turns her once bright and open kingdom into a dark and hostile place, closed off from the rest of the world. The creatures there live in terror of her. Her every thought is bent on how to take revenge on Stefan.

When the new king and his queen are blessed with a daughter, Maleficent knows she has found the perfect means to torture Stefan. While three pixies bestow wonderful gifts of grace and beauty on the young girl in a show of peace, Maleficent has other plans. She places a great curse on the infant, swearing that on her 16th birthday, the girl will fall into an endless sleep that can only be broken by true love’s kiss. Of course, she firmly believes that no such thing exists. Stefan once gave her true love’s kiss, only to betray her in the worst possible way. He knows this, and, distraught, sends his daughter away to be raised by the pixies.

Maleficent keeps a close eye on the “beasty,” always shadowing the young girl. At first, she is just relishing in the anticipation of the curse. Over time, though, she finds herself becoming attached to the princess. The girl is so innocent and sweet, reminding Maleficent of herself at that age. Eventually, Aurora becomes to dear to Maleficent that the faerie decides to revoke the curse. Unfortunately, she had declared that “no power on Earth” could change the curse, and it seems this includes her own powers. The curse holds, and Maleficent finds herself powerless to save the girl who has truly stolen her heart.

While the original Disney version of Sleeping Beauty shows only an evil faerie, the 2014 updated story gives us a three dimensional look at this amazing character. Maleficent is the victim of a lover whose heart is overtaken by a lust for power. While Stefan once cared for Maleficent, his greed for the throne is stronger. Power corrupts, and it certainly corrupts Stefan. It is easy to sympathize with Maleficent as she grieves the loss of her wings and her first love. Watching her spiral into depression and revenge is rather painful, but seeing her fall in love with Aurora is equally uplifting. While she will never have her own children, the princess becomes just as dear to her as any blood relation. In 1959 we were rooting for Prince Charming to bring down the wicked faerie, but now we cheer Maleficent on whole heartedly as she tries to right her wrongs and restore peace to her life.

Maleficent is a wonderful adaptation of the classic tale that far surpasses the original. Children will learn an important lesson in the destruction of revenge and adults will enjoy the progression of the character. You will also be treated to Diaval, the crow, who is one of my favourite Disney characters to date. Whatever your tastes, you’re sure to love Maleficent.

Disguise Adult Deluxe Maleficent Christening Black Gown Costume
If you're a fan of Maleficent, you might want to dress up as her for Halloween. She's strong and powerful and during most of the movie, rather devious, so she'd be a lot of fun to be for the night!
Buy Now

Get a glimpse of the magic with the official trailer of Maleficent. It will also help tide you over until the movie is officially released. 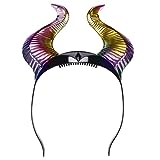 Maleficent Movie Jakks Pacific Glow Horns
Let your kids place the part of Maleficent with these glowing horns. They make a great part for a Halloween costume or just for everyday imaginative play.
Buy Now

Have you seen Maleficent?

What did you think of Maleficent? Was it better than the original story?