Probably the most famous sex symbol of all times, Marilyn Monroe was in addition a successful actress and a talented singer. Marilyn Monroe's appearance in the first issue of Hugh Hefner's Playboy as the first Playmate helped define the future of glamour photography. Marilyn Monroe's troubled life and apparent suicide, along with her failed relationships with the very high profile men in her life, aroused sympathy and interest amongst her fans and critics alike, no doubt helping to raise Marilyn Monroe's status as a legendary figure.

Did you know that you can buy an exact reproduction of the first edition of Playboy that featured Marilyn Monroe? In 2007 20,000 single copies of this reproduction were published and these can still be purchased via Amazon.

Read this review from a fan who had a real original as she compares the difference between what she owns and one of the republished 20,000. Unfortunately, these reprints made her expensive copy almost worthless..

From the movie: Gentlemen Prefer Blondes,

Marilyn was born Norma Jeane Mortenson in the charity ward of the Los Angeles County Hospital on 1 June 1926. Her grandmother, Della Monroe Grainger, had her baptized Norma Jeane Baker. Her mother was Gladys Pearl Monroe. For many years it was believed that Gladys's second husband Martin Edward Mortenson was Marilyn's father and name is even listed on her birth certificate. However Marilyn herself believed a salesman named Charles Stanley Gifford was her father. In either case, she had no father figure in the practical sense.

Her mother placed her with foster parents Albert and Ida Bolender of Hawthorne, California, where she lived until she was seven.

Gladys returned to the picture when she bought a house and reunited with Marilyn. But a few months after they had moved in, Gladys suffered a breakdown and was forcibly removed to the State Hospital in Norwalk.

Marilyn had a half-sister, Berniece Baker Miracle. The girls did not learn of each other until Berniece was 19 and Norma Jeane 12. But once each did discover the existence of the other, they stayed in close contact--both before and after Norma Jeane became Marilyn. Bernice wrote a biography called "My Sister Marilyn" which was published in 1994 to critical acclaim. Marilyn left $10,000 to Bernice in her will.

Her mother's best friend, Grace McKee (later Grace Goddard) became her guardian. But after McKee married in 1935, Norma Jeane was sent to the Los Angeles Orphans Home (later renamed Hollygrove), and then to a succession of foster homes. Her foster sister Eleanor 'Bebe' Goddard became notorious for manufacturing and selling fake Marilyn memorabilia.

James Dougherty a 21 neighbor of Marilyn's married her weeks after she turned 16, so that Norma Jeane could escape the life of orphanages and foster homes.

Caution: Do NOT click the link below - If you are offended by topless photo of Marilyn Monroe do not click below

Bert Stern did the last known photoshoot with Marilyn Monroe only six weeks before her death. This masterpiece, called "The Last Sitting" includes over 2,500 photos including many now famous nude photos of Marylin Monroe.

Forty five years later, Stern did similar nudes of Lindsay Lohan, which were very controversial. Photos from both of Bert Sterns now famous photoshoots were published in New York Magazine. CAUTION: DO NOT CLICK IF YOU ARE OFFENDED BY NUDITY

Marilyn Monroe Versus Lindsay Lohan - How Do They Compare?

Lindsay Lohan has compared herself to Marilyn Monroe, not only by recreating Marilyn's famous last nude photoshoot with photographer Bert Stern (see the book above), but also by comparing their personalities and their infamy. See the Huffington Post Article: Lindsay Lohan Compares Herself To Marilyn Monroe.

How do you think Lindsay Lohan compares to Marilyn Monroe?

This is a sort of scrapbook from Marilyn Monroe. It contains her notes, poems, letters and photos. Not really a book but rather an assortment of pieces of "Fragments" from her life.

You can buy the white dress worn by Marilyn Monroe by clicking a photo below. 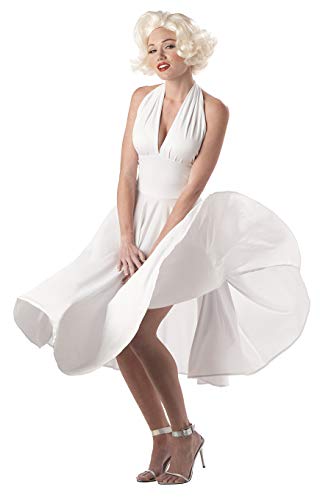 Five Marilyn Monroe films plus the documentary "The Final Days" makes this DVD EXTREMELY popular on Amazon. Check out the Amazon reviews and see for yourself.

To Vote, just click on the up or down arrows below.

To Buy a DVD, click on the orange link below.

This movie was scandalous for two reasons:

* Due to her frequent absences, Marilyn Monroe was fired from the movie on June 8, 1962. Fox later tried to rehire Marilyn, and she agreed. However, she died less than 2 months later and the movie was never finished, losing $2 million for Fox, at that time a very costly loss for a movie studio.

* Second, Marilyn Monroe did something no other Hollywood star had done before. She swam around in only a flesh-colored bikini bottom and did a photosession for journalist without the bikini bottom. This film documents Marilyn's beauty and sensuality even in the last years of her life.

These quotes say so much about this remarkable lady. While some say she was nothing but a bimbo who used her looks to achieve stardom, these thoughts show that Marilyn Monroe was much more than meets the eye.

If I'd observed all the rules, I'd never have got anywhere. A career is wonderful thing, but you can't snuggle up to it on a cold night. What good is it being Marilyn Monroe? Why can't I just be an ordinary woman? A woman who can have a family ... I'd settle for just one baby. My own baby. Hollywood is a place where they'll pay you a thousand dollars for a kiss and fifty cents for your soul. My illusions didn't have anything to do with being a fine actress. I knew how third rate I was. I could actually feel my lack of talent, as if it were cheap clothes I was wearing inside. But, my God, how I wanted to learn, to change, to improve! If I play a stupid girl and ask a stupid question I've got to follow it through. What am I supposed to do - look intelligent? Shelley Winters: If she'd been dumber, she'd have been happier.

This was one of Marilyn Monroe's classic album. A must for any true Marilyn Fan!

Let's Make Love
Marilyn sings classics such as "My Heart Belongs to Daddy", When I Fall In Love, Happy Birthday Mr President and others. Features 16 tracks!
Buy Now

Candle in the Wind by Elton John and Bernie Taupin

The original version of Candle in the Wind was from Elton John's "Goodbye Yellow Brick Road" album of 1973. The lyrics as can be seen below are about Marilyn Monroe who was born as Norma Jean:

Though I never knew you at all

You had the grace to hold yourself

While those around you crawled

They crawled out of the woodwork

And they whispered into your brain

They set you on the treadmill

And they made you change your name

And it seems to me you lived your life

Never knowing who to cling to

When the rain set in

And I would have liked to have known you

But I was just a kid

Your candle burned out long before

Your legend ever did

The toughest role you ever played

And pain was the price you paid

Even when you died

Oh the press still hounded you

All the papers had to say

Was that Marilyn was found in the nude

From the young man in the 22nd row

Who sees you as something as more than sexual

More than just our Marilyn Monroe

Candle In the Wind: Buy it! 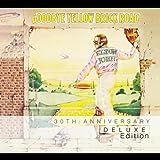 Goodbye Yellow Brick Road (30th Anniversary Deluxe Edition)
This is, in my opinion, the best album that Elton John ever made. Just about every song is amazing. This album set up Elton's career. He made good music afterwards, but NOTHING compared to this album. Every Elton John fan should have it.
Buy Now

Which Side Are You On? - What Do You Think Are The Facts About Marilyn Monroe?

What Do You Think About Marilyn Monroe?

The Mystery Surrounding the Death of Marilyn Monroe

The circumstances of her death remain to this day controversial, a mystery which will likely never be solved.

Her death was ruled to be "acute barbiturate poisoning" by Dr. Thomas Noguchi of the Los Angeles County Coroners office and listed as "probably suicide", but because of a lack of evidence, her death was not classified as "suicide".

However, there is much mystery and speculation surrounding her untimely death. There are many who believe that Marilyn Monroe was murdered.

Several people stated they observed Marilyn Monroe being secretly taken that night by ambulance to a nearby hospital before being returned again to her Brentwood home. Some claimed that Marilyn's body was then 'rediscovered' by Eunice Murray, and her psychiatrist several hours following the initial discovery of her body.

It was widely speculated that Marilyn Monroe had an affair with both Bobby and John Kennedy and that she was becoming very demanding, calling the white house very frequently. Many speculate that she was murdered to avoid an embarrassing scandal. Peter Lawford, an in-law of the Kennedys reportedly the last person to speak to her, was quoted that her final words were "Say goodbye to Pat (Lawford's wife), say goodbye to the president, and say goodbye to yourself, because you're a nice guy."

Jack Clemmons was the first police officer to arrive on the scene. He reported, "Marilyn was lying face down in what I call the soldier's position. Her hands were by her side and her legs were stretched out perfectly straight. It was the most obviously staged death scene I have ever seen. The pill bottles on her bedside table had been arranged in neat order and the body deliberately positioned. It all looked too tidy."

There is an interesting timeline of events which outline the known facts of the day of Marilyn Monroe's death.

In 2006 CBS News reported about "newly released documents and audiotapes about the night Marilyn died" in which the facts surrounding Marylin Monroe's death were detailed in an article called The Marilyn Tapes.

It is unlikely that the cause of Marilyn Monroe 's death will ever be solved.

Do You Have A Theory About How Marilyn Monroe Died? Was it murder? Suicide? An Accident?

An interview with Susan Strassberg Reveals Many Facts About Marilyn Monroe - Author of "Marilyn & Me: Sisters, Rivals, Friends".

An interview with Susan Strassberg the daughter of legendary actor and teacher Lee Strasberg. Strasberg is the author of "Marilyn & Me: Sisters, Rivals, Friends". Lea Strasberg was Marilyn's acting coach. Susan was a close friend.

This is what differentiates her book from other biographies. Most biographers did not actually know Marilyn Monroe, but based their writing on reseach. However, Susan based her book on her many conversations with Marilyn Monroe.

Marilyn sang this song on May 19, 1962. She died less than three months later on August 5, 1962. This video was one of her last public appearances. Also, there were many rumors that Marilyn Monroe and JFK were having an affair at the time she sang this song, which gives this song even more meaning.

How many of the Marilyn Monroe Facts did you know?