While waiting for the Star Trek movie reboot, I found something that Star Trek fans, both old and new, absolutely MUST see. It's a full-length fan-made movie: Star Trek: Of Gods of Men.

It's not big-budget studio quality, of course, yet the special effects (if not the camera work) are good enough for TV. More importantly, it's classic Star Trek, a story that the Great Bird of the Galaxy would have loved. The characters and actors are drawn from most of the Star Trek series. The more you know about Star Trek, the more magical it is. But even if you have come to Star Trek fandom recently and don't know any Trek history, it is an enjoyable tale and a more than worthy homage to the franchise.

This page is a movie review -- and you can watch the movie below, since its makers have uploaded it to YouTube! I'll also tell you how I got my own complimentary copy of Star Trek: Of Gods and Men on DVD.

Fans of Star Trek, I give you:

It's been a long time since a Star Trek story put tears in my eyes. The last two were "The Visitor" on DS9 and Star Trek: TNG's superb "Inner Light." I guess that shows my tastes: I like alternate timeline stories from "Mirror, Mirror" in the old series (the dark alternate universe Federation) to the lighthearted DS9 send-up of the old series, "Trials and Tribble-ations". I enjoy how they take the world we love and turn it upside-down, showing favorite characters and the Star Trek universe in a different light in order to bring out the core of what they are.

Star Trek: Of Gods and Men is such a story. The alternate timeline gives its writers freedom to tell an original story without violating canon, while letting Walter Koenig (Pavel Chekov) uncork that rugged, darker side of his acting that fans fell in love with when he guest-starred as a recurring villain (Bester the PsiCop) on Babylon 5.

Nichelle Nichols, on the other hand, plays Uhura as the wise, gracious, and sharp-tongued character she always was, but scripts seldom allowed her to be. Uhura is the hero of this tale, and in my opinion "wins" the battle with the truth of her words, trumping all the fighting and (excellent) space battles.

I love this movie most of all because it's fun seeing Chekov and Uhura getting their own story, just for a change, instead of playing secondary characters behind Kirk, Spock and McCoy.

(Order of Appearance in Trailer)

And that's just for starters. Watching this movie is like playing "Spot the SF actor".

"Of Gods and Men" Review Continued

Despite Uhura's mastery of communications, I have to admit the dialog is somewhat wooden in places -- a flaw of much Star Trek! I could've done with a little less vamping from Chase Masterson (Leeta from DS9, having a ball playing an Orion slave girl). It's also more violent than old Trek, warranting a PG-13 rating, and there are a few instances when the main characters don't react to redshirt or minor character deaths as much as I'd expect. Those glitches aside, the acting is good to excellent.

Alan Ruck reprises his role as the good-hearted, unlucky Captain Harrington, who commanded the Enterprise B in Star Trek: Generations. (There's an insider's joke in Of Gods and Men: he says ruefully that what happened the day Kirk died would probably have happened no matter who was in the captain's chair. It's sad but true, since most of us have forgotten him!)

Tim Russ (Tuvok) is as perfect a Vulcan as ever, and I'm glad he found time to act as well as direct. The few non-Trek actors hold their own with the regulars. Garrett Wang (Harry Kim) seems to be taking Sinister 101 lessons from Walter Koenig to shake off his boy scout persona. J.G. Hertzler plays yet another Klingon with his usual aplomb (though he seems to be fighting his fangs). Lawrence Montaigne (Stonn, Spock's rival in "Amok Time") is intriguingly good: I wish he'd had more screentime. (Yes, T'pring shows up too). There's touching cameos by Grace Lee Whitney reprising Janice Rand and Cirroc Lofton (Jake Sisko) as Uhura's son -- and the size of a linebacker! Finally, Ethan Phillips (Neelix) helps launch the tale, playing an anonymous nebbish who ought to be wearing a red shirt.

The camera work is steadicam (an oxymoron), which some viewers have complained about. It's the technique used in the new Battlestar Galactica series. I don't mind it. The special effects, especially the space sequences, blow away the old series and some of TNG.

I'm dodging around the most important topic -- the PLOT! because I'm trying to avoid spoilers. But, in short, this Star Trek fanfiction story is a sequel to the classic Trek episode, "Charlie X." Here's a one-minute trailer for that fan favorite:

A few key moments in "Of Gods and Men" echo things appearing in this trailer (Uhura's singing, Charlie's interactions with Janice Rand and Captain Kirk):

"Of Gods and Men" Review -- Conclusion

So that's Charlie. In the original series, Kirk was forced to leave Charlie behind with his alien caretakers. They had given him augmented powers to help him survive a crash that killed his parents. But they could not give him the moral compass needed to live among his own kind. What happened to Charlie? We never knew-- until now.

You may also want to review this trailer of Where No Man Has Gone Before, the Star Trek pilot episode that kickstarted the series. It, too, provides a character and a bit of backstory for "Of Gods and Men."

As for the story of STOGAM, I can only say a few things more without spoiling it. It explores many, many of the recurring themes of Star Trek: When is fighting justified, the logic and pacifism of Vulcan philosophy, "The needs of the many outweigh the needs of the one" (or do they?), how to handle extraordinary power, and the bonds of friendship that transcend command rank, race, and species. This is a dark story with a style all its own. Yet it feels like part of the Star Trek family. The more you know of Star Trek, the more you will love this labor of love.

You may want to go to their website so you can watch the highest-quality version and browse their in-depth info on how "Of Gods and Men" was made. Or, just watch it right here. They've uploaded it to YouTube, and it looks great:

Star Trek: Of Gods and Men (and Trailer for Their Next Film)

Where to Watch "Of Gods and Men"

Visit the official website to watch an even higher-quality streaming version of the film.

There's information about the cast, the production, and Renegade Film Studios. Also, while they can't sell fan-made Star Trek products, they do sell licensed Star Trek movie posters and other memorabilia on behalf of the show's owner -- CBS -- and will throw in a "complimentary copy" of the Star Trek: Of Gods and Men DVD! (I've got one)

What's your opinion of the fan film, 'Star Trek: Of Gods and Men'?

There is a major plot twist in Of Gods and Men which seems to parallel something in the 2009 Star Trek reboot.

Hey. If the official franchise liked a fan idea enough to adapt it, it's their prerogative! 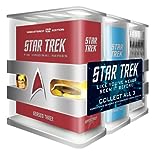 Star Trek: The Complete Original Series DVD (Seasons 1-3)
I thought I wasn't going to like the remastered edition, but it's done so subtly that I generally don't notice the difference beyond the fact that everything is amazingly clear, sharp, and clean-looking. However, the outer space scenes have been re-rendered using CGI. They stayed faithful to the original models and cuts, except for subtle tweaks -- you'll spot lightning bolts in the clouds of planets, for example, and the infamous "out-of-focus ping pong balls" ship in The Corbomite Maneuver has acquired facets on each nodule so they look more like crystals and less like, well, ping pong balls. (As a matter of fact, I happen to have "Space Seed" -- TOS episode with Khan -- on pause on my TV, and I can tell you the original, beloved Enterprise is so pretty it makes me ache. It's rendered precisely from the orginal series' scale model -- which as any Trekkie knows is in the Smithsonian-- but the lights, texturing, shadows, and even those weird glowing pods on the front of the nacelles look absolutely solid and real. Khan's ship is the same model as before, but since it's crippled, the remastered version has it slowly tumbling in space instead of just hanging on a string.) If you prefer your Trek in its original flavor, dated effects and all, look for the 2-episode DVDs of the original series,. OR... best of both worlds... buy Star Trek: The Original Series - Seasons 1-3 [Blu-ray Edition] which lets you to toggle between original and remastered (HD) version while viewing!
Buy Now

The Voice of Star Trek

Lady Bird of the Galaxy

Please share this page with fellow Trekkies (or Trekkers, you youngsters you!), and drop a comment below!