Now You See Me (movie) - How Houdini is Behind it All

Recent blockbuster hit Now You See Me is entirely fictional. However, it borrows heavily from the life and actions of legendary magician and escape artist Harry Houdini. Did you know f.ex. that Lionel Shrike and Thaddeus Bradley are the split personalities of Houdini? Or that Houdini himself was the president of a magical society, somewhat resembling the Eye of Horus? Read on.

Now, first of all I have to stress that this article includes spoilers. It is intended for those who have already watched "Now You See Me" and who want some more background for interpreting the events of the movie. If you don't want to know details about the storyline, stop reading right now.

And for those readers who are still with me following that disclaimer: What follows is about what I think inspired the makers of the movie to create several of the plot elements - I have not checked it with them, though, so no guarantees ;-)

One aspect of the plot which becomes evermore important throughout the movie, is the shared history of late magician Lionel Shrike, who met his tragic end in a safe at the bottom of the East River, and magic debunker Thaddeus Bradley, who started his career by debunking Shrike.

In the movie Shrike died in an attempt to do the ultimate trick which could not be debunked by Bradley, I.e. escaping from inside a safe dropped to the bottom of New York's East River. As we know, he did not succeed, which was incidentally no fault of Bradley's but happened because of a design error in the safe (the motivation for the final heist in the Movie). This trick is no invention of the movies' but was actually done in real life by Harry Houdini in 1912, also in the East River. There was no safe, though, but an (apparently) well nailed and secured wooden packaging box. Houdini succeeded in getting free of his shackles and escaped from the box unharmed in less than a minute, with the shackles still inside the undamaged box! He repeated this feat numerous times in other locations as well.

The movie's Thaddeus Bradley (Morgan Freeman) is a former magician, who switched sides to make a career (and a fortune) debunking the feats of other magicians. This was also done by Houdini.

Late in his career, while still doing his famed magic numbers, Houdini began exposing what he considered to be fradulent mediums and spiritualists. He even wrote the popular book "Magician among the Spirits" about it, exposing (among others) the man behind Sherlock Holmes, Sir Arthur Conan Doyle. In the final proper chapter of the book he went on to explain how magicians, such as himself - and Thaddeus Bradley in the movie, one might add - were perfectly qualified and almost had a duty to expose the tricks of such spiritualists, who fradulently convinced other people that they had made contact with their departed loved ones.

Just as Bradley, Houdini was not adverse to making money either. He went as far as to copyright some of his acts and he successfully sued competing artists for copying fx his Chinese Water Torture Cell, an act resembling that performed by Henley Reeves (Isla Fisher) in the beginning of Now You See It with piranhas and blood added for effect.

The Eye of Horus - and Dylan Rhodes

The movie contains numerous hints concerning an ancient and secret society of magicians known as the Eye of Horus. This is one aspect of the movie which is never properly delved into, and we don't get to know much about it (if anything).

The name itself, however, gives a bit away to those viewers who know their Egyptian mythology. Horus was the son of the gods Isis and Osiris. The father, Osiris, was castrated and drowned by his brother, Seth. Seth was himself later overthrown by Horus, who then became known as "Her-nedj-tef-ef" or "Horus, Avenger of his Father" - which is basically what Dylan Rhodes (Mark Ruffalo) becomes in the movie.

Other than that, societies of magicians, spiritualists, etc. have existed for centuries, depending somewhat on your definition of those terms. The illusive Rosicrucian society, reputedly founded in the 15th century, had as a goal to "provide insight into nature, the physical universe and the spiritual realm", just like the apparent goal of the Eye of Horus in the movie is to share the innermost secrets and truths about magic to only those who have proved most worthy (the Four Horsemen and Rhodes himself).

Another obvious parallel (considering the name) is probably the Religion of Thelema, founded by English occultist and magician Aleister Crowley in 1904. This religion also included an element of Magick (with a k), which, according to Crowley, was "the science and art of causing change to occur in conformity with will". He further held the belief, that mankind was about to enter a new era in time known as the "Aeon of Horus", an era of self-realization.

In 1917 Harry Houdini became the president of a somewhat more down-to-earth society, known as the Society of American Magicians. There is nothing particularly secret about this society, which still exists as a public professional society and has as its goal to "advance, elevate, and preserve magic as a performing art", but even so the Houdini connection is there.

A few related items which can be bought from Amazon 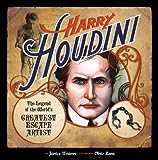 Harry Houdini: The Legend of the World's Greatest Escape Artist
A great illustrated biography about the master illusionist
Buy Now 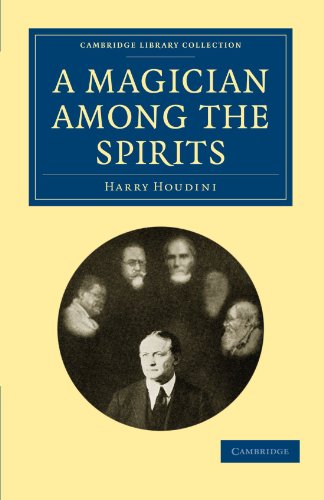