I've done pages for movies with characters who are paraplegic, quadriplegic, blind, and amputees, but there are some physical disabilities that have so few movies that it's hard to give them their own lists!

This is the list for those that fall between the cracks. I hope that Hollywood and Indies will make more movies that have characters who represent these disabilities. Perhaps someday each will have its own list.

Movies I haven't seen yet

This movie is a great glimpse into the very beginning of the disability civil rights movement. It's about a partially deaf vietnam vet (there will be another list for Deaf characters, not finished yet!) who befriends a young man with cerebral palsy. It's interesting to see the major shifts in attitude that happen around them. Though the man the movie is based on gives himself rather a lot of credit for the disability rights movement, and this movie is kind of too sweet and soft, it's still worth watching.

An M. Night Shyamalan film about a man who seems to not be able to get sick or injured and his opposite, a man who has Type I osteogenesis imperfecta, AKA brittle bone syndrome (not that he looks anything like a person who actually has this condition!) This movie plays on some unfortunate stereotypes about disability, using it to show a bitter villain, which tires me. The movie is pretty interesting, though, and well acted.

This is a weird movie, quite different from mainstream. It's about a girl who cleans pools for a living and tries to keep all the crazy characters in her life in line. One of the people she meets is a young man who has ALS. She takes him along for some of her adventures and they fall in love. I had some trouble following what was happening in this movie, but it was enjoyable.

A well-loved children's movie, this story is set in a fantasy kingdom where Willow's character is not a little person, but belongs to a particular race of short people. In that way, it isn't about disability at all.

This is a fun and very sweet movie about evil queens and babies with huge destinies and a farmer who gets caught up in it all.

Two terminally ill patients escape from a hospital in Europe and head for Amsterdam to fulfill the dreams of the younger man. The dynamics in the relationship between the two is interesting and emotionally moving. Timothy Dalton and Anthony Edwards do a great job in this little known film. Though Edward's character needs a wheelchair, he associates that with being ill and so Dalton's character buys him a bicycle to lean on instead. An odd choice, but they're pretty odd characters.

Get it at Amazon - Only on VHS at the moment 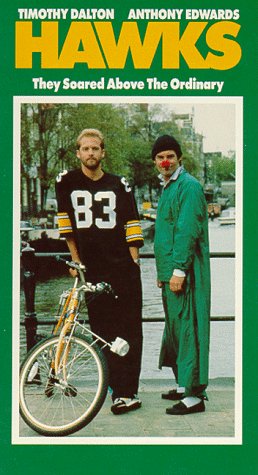 A movie that shows the behind the scenes scam of a faith healer who puts up revivals just to take money. The group breaks down in a small town and set up their show, but Steve Martin's character isn't counting on a young boy with a real disability. He pretends to heal lots of people, but he avoids Boyd. Even so he is falling in love with Boyd's sister, who is furious with him because Boyd has seen many faith healers before and they have always told him that his lack of healing is his own fault. I find the ending uncomfortable, but it fits with the theme of the movie.

Boyd walks with forearm crutches, the result of an injury in a car accident that killed his parents. It's never specified what his injury actually is, but it affects only one of his legs.

This is a biographical movie about the artist Frida Kahlo, who is not well known for the disability aspects of her life. She had polio as a child and as a teenager she suffered tremendous injuries in a street car accident. Though she regained her ability to walk, she dealt with intense pain throughout her life.

Based on a book called Freak the Mighty, this is one of those inspirational kids stories about seeing beyond the surface assumptions. It follows two young boys who become unlikely friends. One is ridiculed because of how large he is and the other has something called Morquio's syndrome, which is a rare genetic disorder. It's a very sweet movie and I enjoyed it very much the last time I saw it, which was several years ago now.

This is ultimately a very sad story about being young in Germany as the Nazis were taking power. It centers on a group of friends who love underground swing music, a way to break away from the establishment. As their lives change, though, each has his own way of responding to the Hitler Youth camps that they are expected to join.

One of the friends is a boy with a club foot. His suffering sheds light on an often overlooked aspect of the WWII era: Jews were not the only ones being eliminated by the Nazis. People with disabilities were also targeted. They were seen as weak and not "ideal" people. I would like to see more attention paid to that tragic aspect of this time period.

A startlingly honest film about two young men living in a nursing home, one with muscular dystrophy and the other with cerebral palsy, and their search for meaning and independence. Rory inspires Michael to reach for a fuller and broader life, not defined by what others believe is possible for him.

Which Am I Missing?