The Penguin Cafe Orchestra's music is beautiful, humorous and unique. It will sound familiar to anybody, anywhere in the world, and that's why it will make you smile.

To others, its musical style can be loosely defined as a blend of chamber music, ambient and folk with strong harmonic elements. Lots of strings, piano, harmonium, bass, cuatro and ukuleles are the main instruments.

Watch and Listen to The Penguin Cafe Orchestra - You might have listened to their music already!

and tell me what you think?

"The Penguin Cafe is an imaginary and kind of introverted place which did not exist in the real world."

December 11, 1997 was a very sad day for all Penguin Cafe fans. Simon Jeffes died of a brain tumor. I still remember that two years earlier I missed the opportunity to go to one of PCO's last concerts.

He always considered he didn't have enough musical training to be a classical musician and no intimacy with pop to be a popular musician. And although he lived in many countries and was crazy about music from many cultures he never wanted to do "world music".

In this clip, Simon explains why he used Penguin for the name of the band.

Arthur Jeffes and Music From The Penguin Cafe

Arthur Jeffes (Simon's son) has brought together a group of musicians to create Music from the Penguin CafÃ©, playing the music of the Penguin CafÃ© Orchestra and combining it with his own compositions.

This album is the closest thing to bringing the band back from the original Penguin CafÃ© Orchestra. Thirteen years after Simon Jeffes death, his son, Arthur, has started playing his music again. Performing under the name Penguin Cafe, the younger Jeffes along with a new group of musicians is re-visiting his father s music and starting a new chapter in the story of this unique and strange creative world. Their sound is at once familiar and new, combining acoustic power and a beguiling, feisty charm.

"My father loved Pierre Boulez and Karlheinz Stockhausen. A thank-you telegram he once received from John Cage, for some help with a performance of a piece in New York, was framed on the wall of his study."

"Music for a Found Harmonium, written on an abandoned harmonium he had stumbled over on a Kyoto street. He didn't pick up the instrument straight away - he left a note on it saying he'd come back the next day and, if whomsoever didn't mind, he'd take it away. Whomsoever clearly didn't mind, and that piece of music and the harmonium have travelled the world."

“The music loves to be played”

So How Was The Show?

It's been a few years since I have been so captivated by a performance. An eclectic mix of supreme musicians who were obviously having fun and enjoying every moment of the performance. I didn't want the night to end.

Thank you for such a wonderful evening.

On December 11th, 12th and 13th 2007 musicians of the fabled and fabulous Penguin Cafe Orchestra played three concerts at the Union Chapel in Islington, North London.

The shows were timed to commemorate the 10th anniversary of the death of the PCO's founder, Simon Jeffes.

John Bungey wrote a nice review on TimesOnline: "Under the auspices of Jeffes's son Arthur, the ten-piece ensemble revived greatest hits that varied from the melodic minimalism of Numbers 1-4 to the joyous bustle of Music for a Found Harmonium and the Latin lilt of Lifeboat (Lovers Rock)."

14. Music for a Found Harmonium

A brilliant mix of English renaissance and Venezuelan joropo folk music. Simon plays the cuatro, a Venezuelan 4-string instrument. I think it's the best of the Zopf suite. 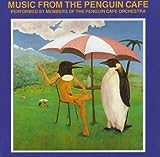 Who's Behind The Album Covers?

Emily Young produced the artwork for most album covers for PCO. In the 70s and 80s, she lived and worked with Simon Jeffes. She's also the mother of Simon's son: Arthur Jeffes. Today, Emily Young has become one of the most important sculptors in Great Britain.

Artwork for the album: Union Cafe

“Come to the Penguin Cafe where things are just not like that!”

Broadcasting From Home - A Fan's Perspective

Leonardo from The Netherlands created videos inspired on this album, which include pieces like White Mischief, Isle Of View (Music For Helicopter Pilots) and Air. He talks about the intuitive process of making these videos:

"First, I choose a piece of music that I like and then I experience it with videos or drawings I've made. With the right atmosphere in place, I just follow the feelings I get while listening to the music. I try to translate it into movements, colors, figures, etc. Sometimes I get surprised about the outcome while I'm using my design or video-editing program; sometimes I don't know how I create things and if I like them I quickly rush to save the edited video. I just couldn't reproduce the same thing all over again."

"The important thing is that I always try to create a balance between the music and the video. They have to become one." 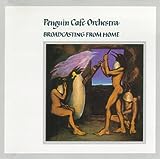 Broadcasting From Home
This album can be enjoyed in a different way. Whereas the first album is more consistent, Broadcasting is more challenging to listen to; the songs are more subtle, more sombre. My favorite is White Mischief, a song that spares repetition, yet it has beautiful nuances that is haunting. In short, this is music to sit back and slide yourself into the quaint soundscapes of a reality beyond.
Buy Now

“I am the spiritual proprietor of the Penguin Cafe, I will tell you things at random”

Piano Music
Most of the pieces on this record are unreleased material found on Simon's tapes after his death. With the exceptions of Piano Music, Kora Kora and Silver Star. Lullaby is a new piece completed by Simon but recorded after his death by friends and members of PCO.
Buy Now

Connect With The Penguins!

Where Have All The Fuzzy Penguins Gone? - A Fan Writes a Song Inspired by PCO

I stumbled across this melody one night and thought, "This sounds a bit like The Penguin Cafe..." which is no big surprise since I've been saturated in their music for more than two decades! So I googled 'em up and learned of Simon Jeffes's tragic death. That night I wrote the lyrics. Now, I offer this song as a small token of my thanks and esteem for all the wonderful music Simon and the gang have given us. Thanks also to Cinetech for featuring me on this excellent blog...it's quite an honor! Peter Mickelson

Shout Out For Penguin Cafe Orchestra!