A short guide for emerging film producers, or: "Keep It Simple, Stupid"

Ever been asked to describe your film concept or script in 200 words or less? Asked to give a quick breakdown in a meeting? Been at a party and had someone ask you what your film's about? Chances are, you have. So how do you give your project the best shot in the least amount of time? How do you pitch?

There is no tried and true pitch formula that will attract an investor, executive producer or distributor at script stage to your movie - pitching is just the gloss on an already saleable project. You'll need a good idea and a solid screenplay to back you up. A fantastic pitch will not make a mediocre script fly.

So, now that I've got that out of the way, why do you need a "pitch" for your movie project? What is the point of what is known as an "Executive Summary" in business terms? Well, there are a few reasons.

A now retired filmmaker once said to me "If you're standing at a bus stop, and someone asks you what your movie is about, and you can't convey to them the essence of the film before the bus gets there, then go home and re-work your pitch".

I guess that piece of advice depends on how long the gap is between your local bus services, but the point is a good one.

A general gauge for pitch length is two to three paragraphs at most, which should amount to between 2 to 3 minutes in a verbal pitch. About 600 words. Shorter is better.

It's especially better to keep it short if you're verbally pitching to someone, which most of us in the film industry do, more often than not. Have a slightly longer pitch handy if required (maybe 5-6 minutes), but the general rule is: use all the important facts, but make it succinct, punchy and direct.

Side Note: I once heard a producer successfully pitch with one sentence - so as long as you have all the elements in play, it can be as short as you like.

Give your audience just enough to whet their appetite, and spark their interest, yet not so much that they get lost in the details. Leave them wanting more.

Speak with passion and enthusiasm about your project - if you're not enthusiastic about the film, why should anyone else be? And know your film inside out - because if you get past the pitch stage, there'll be questions and plenty of them.

Also, if there are any "name" cast or crew attachments, mention them in your pitch. Name dropping is perfectly fine in this situation.

Yeah, that's all very nice, but what should I say SPECIFICALLY??

To put it into practice, this is how I'd pitch a movie about, say, a motorbike rider trying to win the greatest motorbike race in the world (with all the drama that entails):

"It's about dreams, guts and glory. It's a story of love, loss, jealousy and betrayal, set against the backdrop of the engrossing, thrilling world of motorbike road racing. It's Days of Thunder meets Chariots of Fire. It's a story that could be about you, me, anyone on this planet - a story that celebrates believing in a dream and the ultimate triumph of the unconquerable human spirit."

Sounds too "Hollywood"? Well, that's the point. They're the epitome of Show-Business. They've mastered the art of the pitch so well, that it's often the only thing that will get you into see anyone in any position to make your film in LA. I know, I've been there.

I took a project I'm still working on over there in late 1998. Yes, it was an eye-opener, and a hell of a learning curve, but it was invaluable experience. I realized that I was embarrassingly new to it once I got there, but my pitch is what got me in the door, which, in turn, led to an unexpected offer on the script (even though I didn't take the studio concerned up on it - a long story to be told another time).

"Its about believing the unbelievable. A story of love and loss, revenge and redemption, myth and magic. It is about an ordinary woman in extraordinary circumstances. A story that encourages you to live in the moment, believe in yourself, trust what you can't explain, love despite the odds and ultimately, finding through your past, the key to your future. Its about discovering and embracing your destiny."

The other way of pitching that script would be to say: "It's The Craft meets Braveheart meets Dead Again." And this is another way of getting people's attention. (although, when I've said this line in the past, I've usually had people stare blankly at me and say "how did you arrive at that combination?". But that's a question and an opening to tell them more!).

Using other, successful, films in the way illustrated above is a very well-used Hollywood technique. If you can identify your film with previous similar ones that did well critically and commercially, you create a positive association for the person you're pitching to. That's why its used on posters for new films created by production talent with a strong track record like "Unbreakable" (i.e. - From the Writer/Director of "The Sixth Sense"). Positive audience association.

Also using the magic "you" word, can help. As long as its used subtly. As anyone on the 'Net knows, when writing text for your site, you should use the word "you" three quarters more than the words "I" or "we". And this also works with pitching, as it unconsciously causes your audience to personally and immediately associate with the subject of your pitch.

So, what else have you got?

Ah, the "So, what else have you got?" question. This is a standard and will normally get asked when you're formally pitching to a distributor, executive producer, investor, studio, whatever.

Basically this can mean several things:

1. They like your first idea but they have already got a project on their slate that is too similar;

2. They think the idea is okay, but like your style and want to know what else you've got up your sleeve;

Who really knows what goes on in the head of an exec., studio, distributor?? Only them. So, really, their reason for asking isn't important at this stage ... what is important is that you have something else to pitch.

So, guess what? You're going to have to have at least four ideas/scripts to pitch to people when going into a formal meeting with them.

I never said working as a producer was easy, did I?

So here are the basic points on successfully pitching once more:

All that remains is backing up your pitch with a script that is worthy of all you've claimed. And that's a totally different subject, that I've partially covered in my other lens, which should really be called an opus it's so long: "10 Steps to Successfully Writing Your Masterpiece for The Stage or Screen", which you'll find here.

Successful pitching is a combination of many things, but primarily - luck, timing and skill. Develop a pitch that is short, covers the essence of the film and conveys imaginatively, but clearly, what it's all about.

And don't forget to "K.I.S.S.". Play by this golden rule, and it will pay dividends, hopefully by getting your movie the green light and bankrolled.

Some books on Pitching from Amazon

You're going to have to do some further research on this subject - well, obviously, as I've barely scraped the surface here - because, if you're going to be a successful film producer, you'd better get used to LOTS of reading and hard work and you have to do most of it on your own!

So here are some people who are specializing in this area for you to learn from: 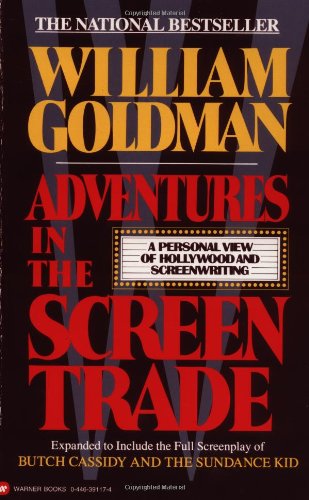 Adventures in the Screen Trade: A Personal View of Hollywood and Screenwriting

William Goldman (writer of ""Butch Cassidy and the Sundance Kid, "The Princess Bride", "Absolute Power", "Marathon Man" and a score of other books and films) shares a wealth of information about working in Hollywood. Not necessarily a "how to" book for producers, but a MUST READ for anyone even thinking about taking on Hollywood as a writer, director, actor or producer. This book was the only thing that kept me sane while I was in Hollywood going through an endless stream of meetings about two of my projects and I can say without hesitation that this book was the only reason I managed to survive the experience in one piece and with my integrity still intact. And it will make you laugh out loud (well, I did!)

Pitching Hollywood: How to Sell Your TV Show and Movie Ideas
Buy Now

The Perfect Pitch: How to Sell Yourself and Your Movie Idea to Hollywood
Buy Now 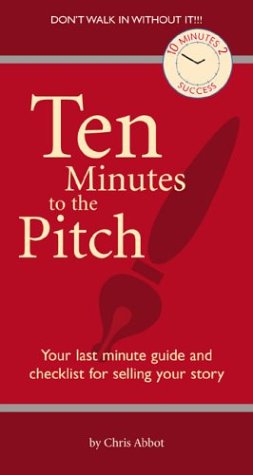 Some links to sites relating to Pitching your film

The internet is a wonderful place, full of great information about absolutely everything. I've included some links below about the art of pitching for your continued research:

And when you get really annoyed with the process of honing your pitch - here are some Shakespeare insult items you can use to get creative with your swearing as well! Have fun!