Every month, Playboy selects a playmate, or playmate of the month, who will be featured in a centerfold, and a series of photos. Every year, one of the Playboy Playmates is selected to be the playmate of the year.

As of January 2008, there have been approximately 650 Playboy Playmates of the month. Technically Miss January, 1954 Margie Harrison was the first 'Playboy Playmate of the Month', although this was the second edition. Marilyn Monroe was in the first edition of Playboy but at the time it was known as the 'Sweetheart of the Month'.

Hugh Hefner is personally involved in all decisions regarding Playboy Playmates. To select the Playboy Playmate of the month, he conducts an annual readers poll and he speaks to several members of his staff. However, he alone makes the final decision.

Are You A Playboy Fan? - Buy the Playboy Fan In Your Life ALL OF THE Playboy Playmates

Why not own all of the playboy playmates? At only $31 it is a steal! 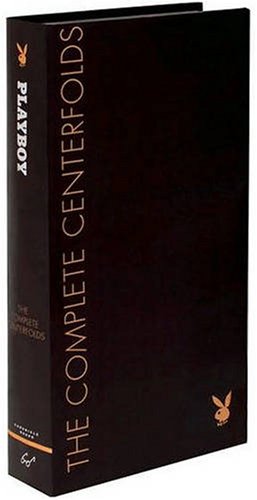 Playboy: The Complete Centerfolds
600 playboy playmates from all of the issues from Marilyn Monroe until 2007. Why not own them all?
Buy Now

What Do The Famous Playmates Have In Common?

Famous Playboy Playmates: What do they have in common?

The famous Playboy Playmates have more in common than you might think!

All of the famous Playboy Playmates are blonds (bleached apparently) All of the famous Playboy Playmates are busty All have struggled to be taken seriously as actresses and have fought being sterotyped as dumb. Three died before reaching 40 Three (Marilyn, Jayne, Anna) grew up without fathers. All had tragedies related to their children. Marilyn and Pamela had miscarriages. Jayne's son Zoltan was mauled and nearly killed by a lion. Jenny's son is Autistic. Anna's son was depressed and died due to drugs.

The First And Most Famous Of the Playboy Playmates

Marilyn Monroe was the most famous Playboy Playmate ever. However, as mentioned above, technically the name did not exist at the time that her feature was published. Marilyn was known as "Sweetheart of the Month".

Marilyn did her nude photoshoot in 1949, 4 years before it was published in Playboy (December 1953) when she was a struggling actress. Hugh Hefner bought the rights to the photos for $500 and used them to launch Playboy. By that time, Marilyn had already reached a certain amount of fame. Rather than be hurt by the publicity, her career seemed to become even stronger. Marilyn was one of the first to benefit from her feature as Playmate/Sweetheart of the Month.

But Marilyn had a sad life. Many know about her tragic childhood, and her three failed marriages. But many do not know that Marilyn was considered a communist sympathizer by the FBI. The FBI even kept a file on Marilyn:

Marilyn was, in our opinion, by far the most talented and legendary of all the playmates. Even Hugh Hefner has said that she is his favorite Playmate ever. For this reason, we have made a page just for Marilyn Monroe. We will not repeat the information here.

Did you know you can buy a "first edition" of Playboy for about $50? In 2007 Playboy published nearly EXACT copies of the first edition. Only two small details (3 staples instead of 2, and a rectangle instead of a square) distinguish the republished magazine from the original. Impress your friends!

Jayne Mansfield was Playmate of the Month for February 1955. Like Marilyn Monroe, Jayne Mansfield died young at the age of 34. But in her short career, she became very famous.

Jayne's most famous acting roles were:

Jayne Mansfield reported her I.Q. as 163, she spoke five languages, and was a classically trained pianist and violinist. But what made her famous was her figure and publicity stunts which she used to keep herself in the news.

Jayne Mansfield has a star on the Hollywood Walk of Fame at 6328 Hollywood Boulevard.

Jayne Mansfield died the same way her father, Herbert Palmer did, in a car, though her father had a heart attack and Jayne died in a tragic car accident.

This is the original edition of the 1963 Playboy Magazine in which Jayne Mansfield appeared as playmate of the month. Click the link to see the price, what a bargain!

Do You Think That Playboy Is An Important Magazine - Or is all about naked ladies?

Some think Playboy is an important magazine. Playboy is widely credited with changing US culture, by influencing Americans values about sex, feminisim and marriage. Many important authors have published in Playboy including Joseph Heller, Norman Mailer, Ray Bradbury, Jack Kerouac, Ian Fleming, Gabriel Garcia Marquez and Kurt Vonnegut. Some leading celebrities have been interviewed in Playboy including Frank Sinatra, Mae West, John Wayne, David Letterman, Bill Gates, Steve Jobs, Arnold Schwarzenegger and Jimmy Carter. Playboy has also been used by many people (mostly women) to launch or relaunch their careers. Others see Playboy as pornography.

Which side of the Playboy controversy are you on?

Do You Think That Playboy Is An Important Influential Magazine?

The Most Famous Playmate Who Came To Television, due to Baywatch

Pamela Anderson was the February 1990 Playmate of the month and one of the most famous playmates of recent times. Pamela was born in Ladysmith, British Columbia and is the daughter of a waitress, and a furnace repairman.

Pamela's modeling career started when she went friends to a BC Lions football game wearing a Labatt's Beer t-shirt. Cameras zoomed in on her and her image was displayed on the stadium screen. The crowd erupted and Pamela was led to center field for an ovation. Labatt's Beer immediately offered her a modeling contract. Her modeling career led her to appear in Playboy, which led to a minor role on the successful sitcom, Home Improvement as a a "Tool Time girl". Pamela left Home Improvement for the role of C. J. Parker on Baywatch appearing in seasons 3-7.

Since Baywatch, Pamela has appeared in a series of poorly received TV shows (V.I.P, Stacked, Stripperella) and movies (Pauly Shore Is Dead, and the recently released Blonde and Blonder).

Possibly her biggest claim to fame was from a pornographic home video of her and husband Tommy Lee taken on their honeymoon which spread through the intenet like a virus. Anderson sued the Internet Entertainment Group, the company that was distributing the video. Eventually the courts awarded Anderson and Lee $1.5 million plus attorney fees for their share of the profits.

February 1990 Playmate of The Month Pamela Anderson - It is a steal!

This is the original edition of the 1990 Playboy Magazine in which Pamela Anderson appeared as playmate of the month. Click the link to see the price, what a bargain!

One Of The Most Tragic Of The Playboy Playmates

Like Marilyn, Anna was the product of a broken home and spent much of her childhood living away from her parents. She was married, gave bith and divorced before the age of 26. She worked as a waitress and exotic dancer before appearing in Playboy.

Anna was on the cover of the March 1992 issue of Playboy, then was the Playmate of the Month for May 1992 and then was chosen as Playmate of the Year for 1993 (the Year before Jenny McCarthy.)

Anna reached the peak of her celebrity, but the reasons were less due to her acting talents than to her personal life. Anna married 89 year old billionaire J. Howard Marshall and later had a very public court battle with his son over inheritance. Smith also battled drug addiction, obesity and frequently appeared in public apparently under the influence of drugs. On her reality TV show, "The Anna Nicole Show" shown on E! Anna's speech was often slurred and almost incomprehensible.

The nearly simultaneous birth of her daughter and death of her son seemed to overwhelm her and five months later she died, like her son, due to drug overdose.

May 1992 Anna Nicole Smith Playmate of The Month - Just click to have a look at the price. You will be amazed.

This is the original edition of the 1963 Playboy Magazine in which Anna Nicole Smith appeared as playmate of the month. Click the link to see the price, CHEAP!

Possibly The Most Charismatic of The Playboy Playmates

Jenny is currently the least well known of the five famous Playboy Playmates. She is also probably the most balanced of the five. Jenny grew up with both parents, though her parents separated after she reached adulthood.

Jenny was Playmate of the month for October 1993 and Playmate of the Year for 1994. She followed Pamela Anderson with small roles in both "Baywatch" and "Home Improvement" and appeared together with Pamela in "Scary Movie 3". Jenny was host for the MTV show "Singled Out". She starred in the MTV comedy series "The Jenny McCarthy Show" and hosted the E! reality show "Party at the Palms".

Due to her son's afflication with Autism, Jenny is Spokesperson for "Talk About Curing Autism". Jenny is also in the center of the controversy about autism being caused by vaccination. There is no scientific evidence for her belief, since the paper that was published with this theory has been shown to be based on manipulated data and fraudulent research. Nevertheless Jenny continues to promote this belief and many children are going unvaccinated for potentially deadly childhood diseases. Read more about this controversy in an Article Published In Time.

Jenny is known for her humor sometimes raunchy humor in her performances. This combination of sensuality and outlandish humor is her tradmark, and serves to set her apart from the other famous playmates who were mostly known only for their looks and sensuality.

Oct 1993 Jenny Mccarthy Playmate of The Month - Check out the price!

This is the original edition of the 1993 Playboy Magazine in which Jenny McCarthy appeared as playmate of the month. Click the link to see the amazingly low price!

Of The Five Famous Playmates, Who Was The Most Beautiful?

Which Of These Five Playmates Was The Most Beautiful

I have selected the five (in my opinion) playmates who used their centerfold experience to launch a famous career. Do you know of any other famous playmates?