Hollywood props are fascinating cultural artifacts from the movie and television worlds and they are quickly disappearing. The market for those items is actually so big and so lucrative that I read that the Los Angeles police department has increased the size of their police art theft department in an attempt to reduce the trade that is going on of stolen and fake movie memorabilia.

For years Hollywood props were reused in new projects, taken home by people working on the films and even thrown away. A final blow came in 1970 when MGM was forced by financial difficulties to auction off most of its collection of 350,000 costumes. One auctioneer resold his purchases shortly thereafter for EIGHT TIMES the price that he had paid for them and, ever since that moment in time, prices on genuine movie memorabilia have increased by an amazing 10 percent every year.

Joseph Maddalena, host of the television series, Hollywood Treasure, says that the pieces which are most wanted tend to come from movies that did not do so well at the beginning but which later grew to have a huge influence, including movies like The Wizard of Oz, Citizen Kane and Blade Runner. The hottest props often had a role in the movie. For instance, Dorothy's ruby red slippers were actually worn by Judy Garland and seen in the film and Michael J. Fox actually rode on the hover board in Back to the Future.

Many famous pieces are simply gone. Those lost pieces include the likes of Marilyn Monroe's famous white dress and the bronze bikini that Carrie Fisher wore when chained to Jabba the Hutt in Return of the Jedi. We do not even know if they still exist.

On this page, find more information about movie memorabilia and some great, collectible movie souvenirs that you can buy today, like this replica of the maltese falcon as seen in the movie of the same name.

Technically, I would not have called Roy Rogers' horse a 'prop' since it was once a living creature. However, now that he is stuffed and mounted I suppose he qualifies and it turns out that Trigger was sold at auction in 2010 for $266,500. You can read the auction story on U.S.A. Today. Or, if you think an autographed picture of Trigger is closer to what you might be able to afford, you can visit Amazon's collection of autographed photos of Roy Rogers and Trigger.

On January 25, 2014, an original prop board game for the Jumanji movie sold for $60,800. That's pretty amazing, in my view anyway but not totally unexpected for an item from a movie that has a certain cult status and a strong following from movie (and book) fans and collectors of the 1990s... Does make one wonder where that game will wind up though, doesn't it?

Learn more about the Jumanji board game by clicking right here.

Lifeboat from the Movie Titanic

A lifeboat used to rescue Rose in the movie the Titanic is available on eBay. Wouldn't that be an unusual movie prop to own? What would you do with it? Perhaps hang it on your yacht as the eBay seller suggests? To learn more about the lifeboat, click here.

There are sometimes original movie props offered for sale on Amazon. If I was spending a lot of money on a movie prop, I'd be really careful to understand the provenance of an item and to know that it is legitimately a prop from a movie. Bonus points for you if you are able to look at the following movie props and name the movies they are from!

The new and the old versions of the movie True Grit were much talked about when the newer version of the movie came out. Fans of either or both versions, can own their own replica of Rooster Cogburn's pistol from The Bradford Exchange to his or her collection of John Wayne memorabilia. Recreated from the revolver that Duke (John Wayne) carried in his movies, this one is hand-cast in resin and features a faux ivory handle with picture of the Duke in action. 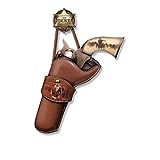 John Wayne The Duke Replica Pistol Wall Decor Art by The Bradford Exchange
The new and the old versions of the movie True Grit have been much talked about in the past year and your True Grit fan can add this replica pistol from The Bradford Exchange to his or her collection of John Wayne memorabilia. Recreated from the revolver that Duke carried in his movies, this one is hand-cast in resin and features a faux ivory handle with picture of the Duke in action.
Buy Now

A collectible version of the Maltese Falcon as seen in the movie of the same name.

Fans of the movie The Maltese Falcon, will enjoy owning this statue produced by Haunted Studios. It's a replica that measures approximately a foot tall and that comes attractively packaged in a burlap bag and Chinese newsprint and a Certificate of Authenticity.

The original Maltese Falcon is housed at the movie museum at Warner Brothers studios. Apparently, it is one of two because Humphrey Bogart dropped one during filming.

The Wizard of Oz Ruby Red Slippers Replica - The original Wizard of Oz ruby slippers are definitely the most iconic movie prop!

Definitely one of the most iconic movie props or pieces of memorabilia in the WORLD are Dorothy Gale's ruby slippers from The Wizard Of Oz. They are estimated to be worth two to three million dollars today but you can own a pair of Dorothy's ruby red slippers. These ones, made by Funtasma, are available through Amazon but if these ones aren't quite what you had in mind, click here to see a page full of ruby red slippers for women and for girls.. 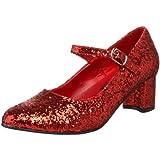 Funtasma Women's Schoolgirl-50G
Own your very own pair of Dorothy's ruby red slippers. These ones and more available through Amazon. See a large selection of ruby red slippers for women and for girls at Dorothy's Ruby Red Slippers From The Wizard of Oz For Women and For Little Girls.
Buy Now

No doubt there are a lot of authentic movie props available from eBay but there are also a large selection of more affordable and still collectible replicas of movie props. Either would make a great addition to a movie themed collection, just make sure you take the time to know what you're bidding on before you commit to buying.

Buying movie memorabilia is much more fun and possibly much less risky than stock-market investments.