For this short (but sweet) acoustic blues guitar lesson, I take a look at the chord progression often found between verses in a typical ragtime song.

In the early 1900s, a style of guitar playing made popular by traveling medicine shows became as 'ragtime blues', or often it was named 'Piedmont Blues'. The bouncy, happy sound contrasted significantly with the slower, darker sounds of the delta blues, which was often played in E, A or open tuning.

(The Photo is called 'Prison Dancer' and it is in the Public Domain for Copyright purposes.)

Introduction To The Idea and Construction Of The Turnaround.

The bouncy ragtime piano ragtime style was quickly adapted to the guitar, and was a complex style. Ragtime blues guitar songs, whose lyrics were often barely disguised sexual innuendo, were performed very successfully by some artists, notably Blind Blake (more about him in a later Lens), Reverend Gary Davis (who could play any style), Pink Anderson, Sam Chatmon, Blind Willie McTell, Hacksaw Harney and Blind Boy Fuller. Other artists, such as Big Bill Broonzy, touched on the ragtime feel, but had a much broader repertoire.

Often these songs were played in the keys of C, G and D, which lend themselves to the alternating bass picking pattern prevalent in this music. As you listen to a ragtime song, a couple of things might strike you. First of all, they tend to move at a good pace, which is often testimony to the skill and accuracy of the players. Secondly, there are common structural elements between songs in the same key, which is not too surprising.

One of these elements I call the 'turnaround' - that short progression of chords that is played between two verses. It provides breathing space between separate sets of lyrics, giving space, building tension and also providing an opportunity for the guitarist to showcase his skills. 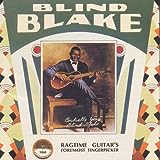 Before we look at the turnaround, here's a few tips about fingerpicking ragtime blues style ...

Turnaround For A Ragtime Song In The Key Of C

A video replaces a thousand words of explanation, but I'll quickly go through the chord sequence here (the video below will put the icing on the cake.) You might just strum these chords before trying the picking pattern I show you later on.

After finishing a verse, we start the turnaround with a basic C chord. As you can see, I don't hold down the bass E string - the philosophy is (almost) always 'if you don't play the string with your right hand, don't fret it with your left!) This will become clearer in the video.

We then move on to F. The diagram opposite shows half of the F chord. Remember - if I'm only plucking the last four strings, then I won't bother fretting the others. This allow for a lot of speed and flexibility, but we need to make sure that our right hand palm keeps contact with those unfretted strings. If not, they may vibrate and make horrible dischordant sounds.

It's quite rare for me to play a full F chord. Often I'll play this shape and also hold down the bass E with my thumb. This configuration frees up the little finger of my left hand to play around on the treble strings.

Next we have a cheeky little chord which often figures in ragtime progressions - Ab7. Here again, the full chord includes the bass E fretted on the second fret with the thumb. As I'm not plucking that string with my right hand, guess what? That's right - you've got it now ...

Play this one with your index finger across the first four strings, and you ring (or little) finger, to fret the high E on the second fret.

Nearly there - not hard at all is it? One more chord to go.

After the Ab7 chord we move back to the basic C chord and then to G to finish off the sequence. The full chord sequence is C-C7-F-Ab7-C-G , moving back to C when we start singing the next verse.

This simple progression holds many possibilities, and we look at some of these in the video below. This short study uses Blind Boy Fuller's classic song 'Truckin' Little Baby' to illustrate just one way of picking this turnaround progression.

There are many variations of this song performed by other artists, who use similar picking patterns. When learning blues guitar, it's good to be aware of the wonderful subtleties these artists left us, and pay homage to their genius and way of life. Play around with the progression, add it to your own personal bag of tricks and incorporate it into your music - enjoy!

You'll find a link to two complete free lessons below the video - enjoy!

Remastered 1935-1938
Blind Boy was one of the most successful ragtime guitarists and at various times played with Reverend Gary Davis (who was also his teacher), Floyd Council and the legendary harmonica player Sonny Terry - all of which are featured on this album. The album spotlighted has a few things going for it. Firstly, you get more than just Fuller, but benefit from some of his major collaborations with important artists. Secondly, the tracks are re-mastered digitally and the sound quality is striking. The hisses and clicks associated with old 78 recordings have been removed and it greatly enhances the listening experience.
Buy Now

How To Play Lady Madonna by The Beatles

Some resources that might help in you quest to learn blues guitar.

Guestbook - Go For It - Give It To Me Straight!