A Review of Gilligan's Island

Why I Love Gilligan's Island

Gilligan's Island was one of my favorite sitcoms to watch as a child. Since I wasn't born until nearly a decade and a half after the show originally went off the air, I was only ever able to see reruns of the show, but I remember routing for the stranded castaways in every single episode. In fact, I still remember every word to the theme song even though I haven't seen the show in a very long time.

Gilligan's Island was a family comedy that originally aired from 1964 to 1967. Although reruns of the hit sitcom aired regularly for decades after the show ceased to record new shows. The sitcom centered around seven interesting characters, five strangers and a two person crew, that are stranded on an uncharted island.

How the Cast became Stranded

When Mr. and Mrs. Howell (Jim Backus and Natalie Shafer), Ginger Grant (Tina Louise), Professor Roy Hinkley (Russell Johnson), and Mary Ann Summers (Dawn Wells) boarded the S.S. Minnow, they were greeted by the Skipper (Alan Hale Jr.) and his first mate, Gilligan (Bob Denver), for what was supposed to be a simple three-hour tour. (I can't write three-hour tour without hearing the theme song in my head.) However, when things begin to go haywire and a storm approaches, the seven strangers find themselves stranded on a deserted, tropical island.

The Many Failed Rescue Attempts

During the three seasons that the series aired, there were many failed rescue attempts, and many of these attempts were due to the cast's inability to work together. For example, Gilligan was usually getting into some kind of ridiculous predicament, the Skipper was usually so irritated with Gilligan that he wasn't much use to anyone else, and the Professor was often distracted by the beautiful women on the island. Meanwhile, Ginger was usually too self-involved to be of any use and the Thurston's thought working to be rescued was below them.

With Gilligan's Island on DVD, I can sail away with Gilligan, the Skipper, Maryann, the Professor, and the Thurstons whenever I would like. Even better, I can share a favorite television show from my childhood with my own daughter.

Get the Entire Gilligan's Island Series on DVD 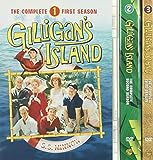 Gilligan's Island: The Complete Series Collection (Repackage)
This DVD includes the entire Gilligan's Island series. This means you can buy one CD and get all your favorite shows in one place.
Buy Now

The Cast of Gilligan's Island

Go ahead and sing along at the top of your lungs (you know you want too)!

Who was your favorite character on Gilligan's Island?