I visited a factory during a trip to Poland directly across from that of Schindler. This brought the movie more alive to me.

Most of us can not conceive of saving even one person from likely death. How about saving 1,100 people while living in a society in which casual death is a routine habit?

"Schindler's List," based on a true story and released twenty years ago in February 1994, ultimately deals with this reality. This film gained Oscars for Best Picture and Best Director for Steven Spielberg, nominated for 10 other Academy Awards and won five more, and won accolades as an outstanding American Holocaust movie.

I've watched this film many times - not at one sitting, but each time broken into twos or threes. I needed time to decompress and process what I was watching. This is a fitting film to watch, probably in bits and pieces as I did, on Holocaust Remembrance Day, 2019.

My Personal Interest in this Story

My interest in the Oskar Schindler and this movie began on my first trip to Poland and Krakow. A well-read fellow traveler remarked that he had walked from the old city square to the site of the Plaszow Forced Labor Camp and Oskar Schindler's enamel factory. He also criticized the fact that we weren't making a stop at Auschwitz which is close to Krakow.

I did visit Auschwitz, now a memorial and museum, on my second trip to Poland. I would have stayed there all day wandering around with my camera and thoughts, if not for the fact that we had a schedule to keep. On my third trip to Krakow, my group visited a blown-glass Christmas ornament factory (the subject of one of my hubpages) just across the street from Schindler's old factory. At the time of my visit, I could only look through the gates.

Now, portions of Schindler's Factory are a branch of the Historical Museum of the City of Krakow. I anticipate visiting Krakow again and definitely hope to visit the Museum to see the progress.

Auschwitz - Birkenau: Railway into the Camp 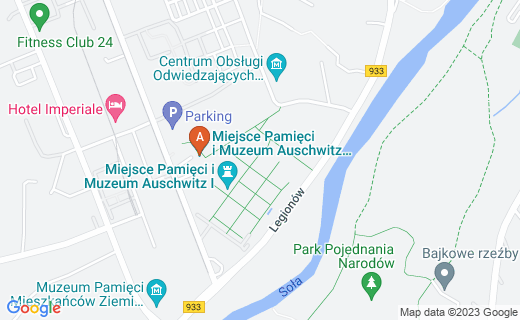 Over three hours long, "Schindler's List" is not an easy movie to watch. It deals with the Nazi occupation of Poland and the roundup and imprisonment of Polish Jews in and around Krakow. Nazi spared This beautiful and fascinating European city from the significant destructions which cities like Warsaw experienced.

Film in Black and White

The film was shot in black and white because Spielberg wanted it to come across to viewers in a documentary form. He resisted urging from studio administrators to do an archival copy in color. "Schindler's List" might be one of the best films that Spielberg has made. If one listens to his interviews, it is the one most emotionally gripping for him to have done.

Who was Oskar Schindler?

Oskar Schindler (Liam Neeson), an entrepreneurial German businessman hoped to profit from the Nazi occupation of Krakow. Schindler sets up a factory to make enamel cookware and utensils. Amon Goeth (Ralph Fiennes), the commandant of the near-by Plaszow Forced Labor Camp, is an alcoholic who shoots prisoners from the balcony of his confiscated manor house. Ultimately, as Schindler's unpaid Jewish labor is forced into the labor camp under Gorth's control, Schindler realizes what is happening to his labor force and other Jews. He slowly develops a conscience.

A balancing act develops between the "good" German - Schindler - and the "evil" German - Goeth. Itzhak Stern (Ben Kingsley), a Jewish accountant and financier helps Schindler to run the plant while altering accounting books to keep Jews from being sent to concentration camps. Schindler's factory is ultimately refitted for making ammunition. The refit keeps Schindler's workforce intact and "working." Schindler begins demanding more Jews for his factory with Stern still cooking the books.

This tale doesn't end in Krakow. As the Allies moved east, Germans moved prisoners to the westward concentration camps and gas chambers. Schindler petitioned Goeth to let him move his factory to Brinnlitz in the Bohemian borderlands with Poland. In October 1944 1,200 Jews traveled with Schindler out of Krakow to Brünnlitz.

Schindler's machinations took money for bribing and flattering officials. By the time that Germany fell to the Allies, and these troops discovered concentration camps, Schindler lost his initial monetary stake, plus whatever money he made selling wares from his factory.

For those who enjoy and look for symbolism in films, here are some items to keep an eye out for in this film. It is up to you to figure out what each means!

Look carefully and you'll see that most people are trying to leave the city.

Does it make a difference to you where movies are filmed?

Are you a viewer who likes and wants realistic filming locations.

Girl in the Red Coat.

Interesting and fascinating. This little girl in the red coat appears several times in the black & white film. It is the only spot of color in the film.

Two of the most dramatic points where the little girl is seen:

2. Schindler sees the girl's dead body in her red coat.

Possible Representations of the Red Coat:

1. "It was as obvious as a little girl wearing a red coat, walking down the street, and yet nothing was done to bomb the German rail lines. Nothing was being done to slow down ... the annihilation of European Jewry."Spielberg's intent about this symbol was to show that the highest levels of government in the United States knew about the Holocaust but did nothing to stop it.

2. The point at which Schindler changes his attitude. Schindler sees the girl's dead body wearing the red coat and he no longer sees "the ash and soot of burning corpses piling up on his car as just an annoyance speculates Andy Patrizio of IGN (an internet entertainment site).

3 - The red coat symbolizes "innocence, hope or the red blood of the Jewish people being sacrificed in the horror of the Holocaust" speculates Professor André H. Caron of the Université de Montréal.

What do you think about movies that deal with such dramatic themes?

Do you like movies with dramatic, and sometimes hard-to-watch, scenes?

The Most Moving Part of the film Schindler's List

Emotional fulfillment near the Film's End.

“Whoever saves one life saves the world entire” is a quote from the Talmud book of Jewish law. If even one man shows humanity to another, he demonstrates the continuing existence of humanity in society—something utterly void in the actions of the Nazis during the Holocaust. Schindler struggled with his idea of using Polish Jews to make money. Ultimately, the Israeli government in 1993 honored Schindler and his wife Emilie by naming them as "Righteous Among the Nations"

Have you seen the movie

Please take a moment and rate this movie "Schindler's List"