The very first album I ever owned was Shakin' Stevens - Greatest Hits. I don't remember receiving the album, I was too young, hence it's an album I've had as long as I can remember. I remember playing it in my room and dancing around to tracks such as 'This Ole House', 'Marie Marie' and 'You Drive me Crazy'. I loved it!

My original copy was a tape cassette and it was many years later that I came across the same album in CD format in HMV. I bought it straight away and started reliving those early memories.

The UK's biggest selling artist of the 80s, Shakin' Stevens (or Shaky to his fans) based his early style on a young Elvis Presley and this shows in many of his hits. His Country/Cajun/Pop style is instantly recognisable and extremely catchy; this is one of those albums that you listen to and will be singing for the rest of the day. 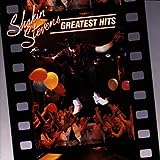 My favourite track as a child was 'This Ole House', a cover of the 1954 Rosemary Clooney single. I love that twangy guitar sound on the intro and the upbeat tempo, along with Shaky's vocals and the memorable chorus. It all comes together to make a classic pop song.

Other favourites of mine include 'You Drive Me Crazy'; pure, unadulterated rock n' roll, so good Shaky can almost be forgiven for the double-denim, white trainers combo he sports in the video (see below), and 'Oh Julie', the first song written by Shaky to reach the top of the UK charts. This track really emphasises the Cajun influence on Shaky's music, with the accordion backing. There is also another upbeat cover version in 'Green Door' (originally recorded by Jim Lowe in 1956).

This album isn't all about the fast paced rock n'roll tracks though. Tracks such as 'Blue Christmas', 'It's Raining' and 'Cry Just a Little Bit' give a taste of Shaky's more emotional side and are welcome additions to the album.

Overall, this is an incredibly fun album. It's the sort of music that gets people dancing and singing along and is fantastic nostalgia for a bit of 80's that certainly isn't heard as often as it should be.

An original advert for Shakin' Stevens Greatest Hits. This is great.

Shaky performing 'This Ole House' on Top of the Pops.

The original video for 'You Drive Me Crazy'.

What is your favourite Shakin' Stevens song from his greatest hits album?