From Nashville To Phoenix: The Plane Ride I'll Never Forget

"Trace ... Adkins ... is ... sitting ... behind you," my husband whispered, accentuating each word. We were at our gate in the Nashville Airport, waiting to board the plane back to Arizona.

I looked at Steve and scowled. "Bull!" I replied, not at all in a whisper. "Trace Adkins is NOT sitting behind me."

Steve knew Trace was my favorite -- that I had a not-so-secret crush on the 6-foot-6, long-haired, hard-bodied, deep-voiced singer. Not nice to mess with me like that.

And then I saw a few of the guys seated across the way, facing us and looking at me, start to snicker.

I looked at Steve, and he nodded. Then my face got hotter 'n' Death Valley at high noon in June!

Face To Face With Trace

That was May, 2008. Steve and I were returning from a 10-day trip to Nashville, where I'd run the annual Country Music Marathon and then hobbled around for the rest of our vacation while we explored the area. (Ooh, the chafing! But that's beside the point...)

So, anyhow, we'd gotten to the airport a few hours ahead of our flight home and figured we'd have something to eat and people-watch while we waited. Another couple who'd been staying at the same B&B had mentioned seeing Alison Krauss at the airport, so we figured we'd see if we could spot someone famous, too.

Well, we sat there for another hour after finishing our burgers and scoped out everyone who passed by. A few times, one of us said, "Hey, doesn't that look like somebody?" Then we'd stare a little longer and decide, "Nah, it's not. Unless maybe it's a soap opera actor."

So we finally gave up and decided to head to our gate, which was at the very end of a concourse. Figured, so much for seeing a celeb. But that's okay, we said. We aren't the type to get all ga-ga about famous people, anyway.

Except ... well, maybe ONE. And, lo and behold, he happened to be sitting right behind us and waiting for the same plane.

And the guys sitting facing us in the next row of chairs -- they turned out to be Trace Adkin's band members and crew. When Steve and I had first seen them, I'd said to my husband, "Hey, they kinda look like a band. But they look like an 80s band to me." Oops. (I told them that later on, and they thought it was pretty funny. And the one with the long hair who I thought was probably the aging lead singer? A roadie.)

Anyhow, when I'd realized Steve wasn't pulling my leg, all the blood had rushed to my face. Then I heard a cell phone ring behind me and a deep voice quietly answered, "Hellooooo." (You read that with a deep voice, right?) Then I held my breath as I sloooooowly turned my head and made eye contact with the man himself. But just for a second before I turned back, not wanting to, like, stare or anything. But a second was long enough to size things up.

Trace was going incognito, in his gym pants, white tee-shirt, white golf cap and (big!) sneakers. And, when he got up to go buy a magazine or something, I gasped, "Oh, my god, his ponytail is a fake!"

Trace puts his all into his shows.

So long story short (sorta), Steve and I ended up being the last ones to board. On Southwest Airlines, there's no assigned seating and no first class, so we had to choose from what was left. And what was left were only three seats. And ONE of those seats was right next to Trace, who was on the aisle.

Well, it just so happened that I had to stand there, my leg hair touching his arm hair--I swear!--while I waited for somebody in front of me in the aisle to put their bag in the overhead compartment. Meanwhile, Steve is poking me in the back, whispering, "Sit there. Sit there."

Uh, yeah, like no way! I couldn't hold my breath for the next three and a half hours to Phoenix. I just couldn't sit there!

Turns out, we ended up sitting with the band instead. And we yacked with the band leader--Greg, the bass player (the guy in the pinkish shirt in the above photo)--for nearly the entire flight. Not that we talked about Trace (as I watched him from my own aisle seat near the rear of the plane). Actually, we ended up talking about books and all sorts of topics, both philosophical and light-hearted, and really hit it off.

To get to the point here, our new friend gave us his contact information and an open invitation to all Trace concerts from there on out. And, with a little encouragement, we ended up taking him up on it. Several shows later--so far--and some hanging out after the encores, plus a bit of long-distance correspondence, we've gotten to know this great guy (the bass player, I'm talking about) and feel like we've made a real friend.

Truth be told, when we now go to the shows, we look forward to seeing our friend and acquaintances in the band as much as their boss, the big man out front.

The Meet-n-Greet With Trace Adkins

Do I have Trace's autograph? No, I didn't bring in anything to sign.

And what did I say when, last in line, it was finally our turn to do the meeting?

"Oh, heyyyy, you're the guy who sings for Greg's [the bass player's] band!" (That was an attempt at a joke.)

So I said, "We met him on the plane from Nashville to Phoenix."

Then Trace started to put his arm around my shoulder and my husband's on the other side for the photo op. His manager was taking all the pictures with people's cameras. (That was the rule.)

Then Steve went to shake his hand, but Trace had already taken out his pen and was holding it.

So I said, "Oh, we don't have anything for you to autograph."

Sheee-ooot! I'm such a dork. Later on, I told our buddy in the band to tell Trace that we really are cool.

So, Have You Heard Him Sing? - Even if you don't like country music, take a listen....

I guarantee this is great singin'.

Some Of Trace Adkins' Best Music 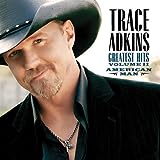 Trace Adkins Can Sing AND Write 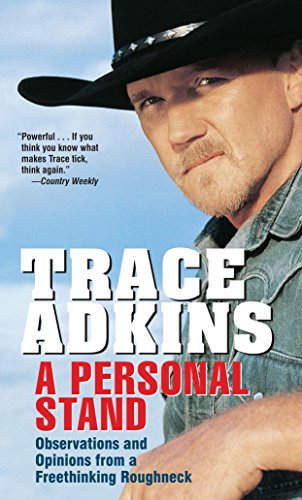 A Personal Stand: Observations and Opinions from a Freethinking Roughneck
This book is sometimes funny, sometimes very serious and insightful, and always entertaining, especially to a fan like me. But even if you don't listen to Trace's music, you'd probably like this book, written by an oil rig worker turned country music star, who's as real and down-to-earth as they come. Albeit a bit reserved sometimes. But he doesn't hold back in this book, sharing his views on politics, personal responsibility, fame, parenting, being true to yourself, hard work, and the way things ought to be.
Buy Now

This song, which was #1 on the Country Music charts for three consecutive weeks, was nominated for two Grammys and two CMA awards, and took home an ACM trophy.

I could spend hours watching these. And I have!

In 2008, Trace Adkins was a finalist on Donald Trump's television show, The Apprentice, where he raised money for his charity, the Food Allergy & Anaphylaxis Network, whose mission is to "raise public awareness, to provide advocacy and education, and to advance research on behalf of all those affected by food allergies and anaphylaxis."

In 2009, he was named FAAN's National Honorary Chair for their Walk For Food Allergy: Moving Toward A Cure.

To Learn More About The Man & His Music

Whether You're a Fan or Not, Please sign my guestbook.